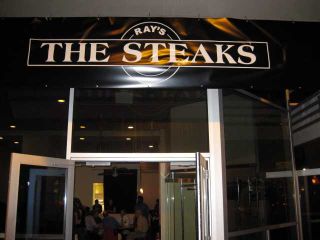 Chef Michael Landrum has been a busy guy of late. Building on the well-earned esteem garnered from his flagship restaurant, Ray's the Steaks, Chef Landrum has built a miniature empire of DC area restaurants, including Ray's the Classics of Silver Spring, and Ray's Hell Burger of Arlington, to which he will soon be adding Ray's the Nets, a reasonably priced seafood option modeled on his established trope of cheap-but-awesome meateries.

When I learned that Landrum and his crew were moving Ray's the Steak's -- synonymous this past eight years with criminally under-priced, house-aged steaks and rich-as-Midas sides -- I was a bit concerned. Why mess with success, I  asked myself? Yes, the old space was cramped, to the extent that even taking reservations was out of the question, but they had a formula! It worked! The place never had a spare seat, and ... what? Did you say that the new location is at 2300 Wilson Blvd, a mere seven minute walk from my apartment?  What a brilliant idea! It's high time they moved out of that old crapshack, anyhow. Status quo be damned! 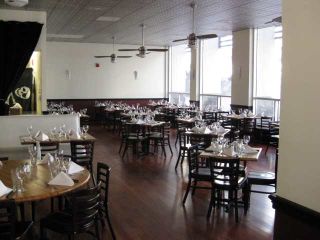 On a whim, Eliza and I wandered over last Wednesday around seven o'clock, and managed to snag an eight o'clock seating (yes, Ray's now takes reservations!). The new space is huge, offering some 150 seats between its two large dining rooms. The set up is a bit schizophrenic: walk in the front door and look to your right, and it is just like the old place, complete with pirate flag, open kitchen, and a collection of tightly packed, bare-wood two and four tops; behind the host stand, Ray's has a more traditional steakhouse look, with burgundy carpets, black table clothes, and high-backed white chairs. We were seated in the "retro-Ray's" room, and after a few minutes, floor-to-ceiling windows notwithstanding, it felt just like old times. 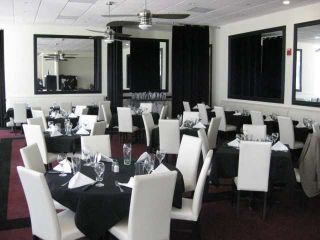 I got to speak briefly with Chef Landrum the other day about switching locations. His one concern, if you could call it that, was that when you make such a dramatic change, psychologically, people want to find something wrong, something different from their idealized memories of the past. Well, let me assure you right now that, beyond general decor, Ray's has not changed at all. At all. The menu is the same off-white card stock it has always been, offering the same great steaks at the same great prices (though I've been told to keep an eye out for a new lamb dish in the near future). The service is as quick and efficient as ever, with the same crack staff dancing agilely between tables, and getting you through 8 oz of meat and a bottle of wine faster than you would have ever thought possible without being rushed. Eliza and I both ordered 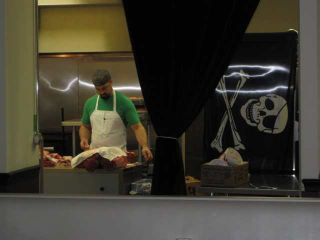 Hanger Steaks, rare, and they were exactly what we'd come to expect: perfectly cooked, flavorful, and the best damned steak deal in the area, period. New to me were the fois gras and bone marrow toppings ($9 and $3, respectively), which Chef Landrum tells me they started offering soon after opening Hell Burger. I got the marrow, and while I wouldn't call the additional fat strictly necessary, it was just the sort of beefy Jello I have grown to love, and was just the thing my decadent, Francophile ass was looking for.

If you loved Ray's as it was, do not fret: Daddy still loves you, he just had to move away, for grownup reasons. If you weren't a fan, and chalk that up to the chaotic ballet that was the old dining room, you might should see how you feel about the new plusher side. As for me, I am really bummed that Ray's moved into my backyard like two weeks before Lent; I was really not banking on that kind of temptation. I'm strong, I'll resist... but if you do happen to see me there on a Friday, please don't tell my mom.

Dress Code: Casual
Parking: Street Parking
Smoking: Not Allowed.
Closest Metro: Courthouse
Reservations: Taken for part of the restaurant. There is also a portion of the restaurant that is first come, first serve.
Baby-Friendly Rating: 2 out of 4 diapers. Laid back and casual environment. The restaurant is bigger and therefore, louder, but there is only one child seat.

Liza had mentioned to me that y'all enjoyed it. I went on Thursday (last week) and had a wonderful experience. I agree 100% with you and look forward to Ray's the Nets.

I am so reliveed to learn that Ray's hasn't changed too much. I was trying to resist going until they worked out the kinks but you've convinced me- I am going!

We went to the new location on FEB 13. We waited only 20 minutes for a table, yippeeeee! We still sat 12 inches away from the next table! You'd think with more space you could have a bit more privacy....NO! The steaks are wonderful. We will continue to come back!!!!!!!!!

anyone know where ray's the nets will be? and possibly when it will be opening?

It will be in old Ray's location in Rosslyn.

Went for an AMAZING dinner last week. They now offer a Sun-Fri dinner special, you get any soup or salad, either the hangar steak or the scallops entree, plus any dessert for $23.95!! That will not even buy your steak at any other place. And it is fantastic!! Extremely efficient and great service, we will be back many many times!

Really, can anyone confirm that they have the special too. I am going a friday in two weeks for dinner and if so thats a great deal!

Does anyone know where Michael Landrum sources his meat, fish, and produce from?

Does he use humanely-raised, grass-fed local beef?

I've been to his restaurants several times - and enjoy the food and great value.

Considering the influence he has made on the area's dining habits -- it would be nice to know that he is also respecting our food sources and health :-)

It's great to see something great actually flourish! Too many good spots go away..Best wishes to Ray's and I love the food.

I arrived here in the Arlington area for a new job one year ago after living in Europe for the past twenty years. While searching for somewhere to live I stayed at the Marriott Key Bridge in Rosslyn since it was close to my new job location. My wife and I ventured around the area looking for places to eat and we stumbled across Ray’s the Steaks restaurant; I noticed how crowded it was outside of the restaurant while my wife went in to find out the wait time. When my wife returned she informed me that we wouldn’t be seated until around 21:00 hours, 09:00PM for those who do not understand the 24 hour clock, the current time was 18:00. I told my wife that there is no food that good for me to wait three hours, and then we left.
Because of the crowd, our curiosity to check out this place grew so I stopped by after work and added my name to the list since no reservations was possible. When we returned we only had to wait fifteen minutes or so before we were seated. I was not impressed after being seated because it looked like a hole in the wall, but after ordering and receiving by cowboy cut steak, mask potatoes, spinach and my bottle of red wine, everything around me disappeared, I was in absolute food heaven. This is truly a steak eater’s paradise, tinder, juicy steaks almost melting in your mouth. If you haven’t found this place yet, seek it out, you will not be disappointed. Since my first visit I have not looked for another steakhouse, so far I have found the perfect one in Ray’s the Steaks. My wife and I will be making another reservation soon, see you there…

By far the best steak place in town...beats the Palm, Ruth's, etc...hands down! I didn't realize there were so many other restaurants...I look forward to them ;)

Thank you for keeping the quality, service, and price as always even as you grow!

I don't see the big love for Rays the Steaks. Hanger Steak? Please... this cut of meat is terrible, tough more flavor, how about not. The bone in ribeye, ordered the most done the chef will prepare it... totally cold in the middle. Rays the Steaks should take his own advice, raise the level of service and the prep of his steaks. Cheesecake for desert, dry and uneventful. Usually don't complain.. not going back.

LOL Meat and Potatoes. The cheesecake that you call dry and uneventful is from Carnegie Deli in New York and is considered by many the best cheesecake in the country.

Great evening, food and service. And thank you, Mr. Lucas for your friendly attitude, paying attention to our needs, giving food recommedations, and doing great follow-through. Excellent! I will return soon. Ray's has truly "raised the stakes" for the standards it has set. [Ask for table W1-3!].
*Fido*

um... Meat and Potatoes... the cheesecake is the only dessert they don't make in-house. It's shipped in from NYC--

I don't get the praise. Was it a good steak? It was ok to good. Have I had as good a steak at Outback? Yes, frankly - though not consistently. Have I had a better steak at the Palm, Ruth's Chris or Morton's? Oh yes. If you want a save a few bucks (and I do mean a few - less than $10 per steak), by all means try Ray's, but I'd rather pay a few dollars more for a better atmosphere, better service, a full bar, REAL soda (why no Coke or Pepsi products???), valet/parking and not to be herded about like cattle. Frankly, these days, you can find a much BETTER deal (See Morton's $99 special right now - salad, steak, seafood, dessert and 2 sides). Also, the 2 sides at Ray's don't do much for me as I didn't care for either - so it didn't add to my savings. I'm glad we tried it after hearing so much about it for all of these years, but we won't be going back.

What is real about Coke or Pepsi? Oh wait, it does have water in it...