I took away quite a haul upon my first visit to the Falls Church Farmers Market (a testament to how much I enjoyed the market I suppose).  One of the best finds in my humble opinion was Blue Ridge Dairy.  I will shamefully admit I had never tried anything from Blue Ridge Dairy before.  Although they sell their products at several markets I frequent (including Penn Quarter and Dupont Circle), there is usually quite a line around their stand…and I hate standing in lines.  But after one taste of their Greek style yogurt, I fully understand people’s willingness to stand in queue waiting for a tub of the stuff.  It’s texture and taste are far superior to anything Fage could ever produce and there isn’t a trace of graininess to it.

Since it was my first time trying Blue Ridge Dairy, I opted to get a small sampling of their products.  Besides the aforementioned yogurt, I also got some of their fresh mozzarella and ricotta cheeses.  The intent was to make a lasagna, but laziness and hunger took over on Wednesday (and a desire to watch Top Chef, which for the record pissed me off).  In the interest of time, I opted instead to make a quick pizza using the ricotta cheese and portobello mushrooms I got from the market and some shallots and garlic from my CSA share.  The resulting meal was more of a rustic hearth bread but just as delicious.  Since I hadn’t made the pizza dough ahead of time, I got the brilliant idea of calling Matchbox to see if they sold their dough.  Sure enough, they did!  I picked up a pound of it after work and headed home to throw together my own personal pan pizza. 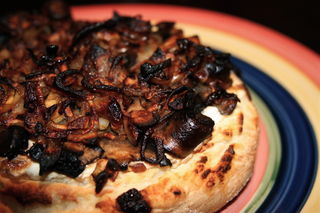 Preheat the oven to 500 degrees.  If you have a baking stone, place it in the oven.  If not, use a nonstick baking sheet.

In a small bowl, combine the ricotta cheese with a small amount of salt and pepper.  Set aside.

In a large skillet, heat the olive oil on medium heat.  Add the shallots and garlic, cooking until they are browned and softened.  Make sure to stir this mixture regularly to prevent it from burning.  Add in the sliced mushrooms and cook for an additional three to five minutes, or until the mushrooms soften.  Remove from heat and allow to cool.

Roll out the dough to the desired thickness and place on a baker’s peel sprinkled with corn meal.   Top with the ricotta cheese and the mushroom and onion mixture.  Shimmy the pizza onto the pizza stone (or place it on the baking sheet) and cook for 10 to 15 minutes or until the dough is a golden brown.

Just wanted to post a quick note about Blue Ridge dairy, as I found their products for sale at Whole Foods in Clarendon. Unfortunately, their Ricotta is actually CHEAPER at Whole Foods than it was at Falls Church farmers market. :-( I think I paid $6 at the market, and saw it for $4.99 at Whole Foods.

That being said, the products were delicious!

that looks awesome! i love ricotta on pizza.

Looks incredible, how much did Matchbox charge for the dough? (I'm dough challenged so this seems like a perfectly good compromise)

Kate - Now you have me wondering if the Whole Foods on P Street has Blue Ridge Dairy Ricotta for the same price as the one in Clarendon. Will have to check that out.

Tom - They charged me $5.50 for the dough. I called first to make sure I could buy it and spoke directly to a manager.

Would just like to introduce myself to you all. I'm Paul Stephan, the owner and head cheese maker at Blue Ridge Dairy Co. First, thank you so much for the kind comments on our the quality of our products. i can't tell you how that excites me. As far as Whole Foods pricing.....we have no control over that. With that said, we don't want to be selling our products at the stands for more money either. I will look into all their current pricing this week and make the necessary changes at our market stands. FYI...we will be LOWERING some of our pricing here real soon!
Again. thanks for the kind words, and by all means contact me directly at brdairy @gmail.com with ANY comments or questions you may have. Paul

I love Blue Ridge products. There's no other mozzarella for pizza, for me!
BTW...yikes!! on what you paid for dough. I pay around $2 at the Italian Store, and it makes 2-10 inch pizzas.
In any case, your pizza looks really, really good!