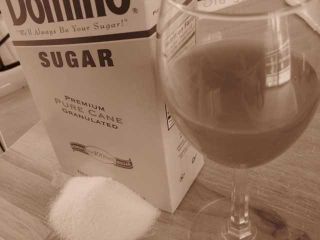 I came across this story while trolling the internets, and I can't believe I missed it the first go around!  I'll save you some clicking and sum it up: Fifty-Two winemakers and eight other individuals are now on trial over the purchase and sale of undocumented sugar. Apparently, between 2004 and 2006, these 52 vintners in the region of Beaujolais patronized a sort of illegal sugar ring, which would leave the region, purchase hundreds of pounds of sugar from surrounding grocery stores without a receipt, and return under cover of darkness. All told, the sugar smugglers are suspected to have illegally sold some 600 tons of the white stuff. The wineries and traders face fines up to 37,000 Euros, and up to two years in prison!

The sugar was being used for a process known as chaptalization, wherein sugar is added to fermenting grape juice to give the yeast more fuel, and thereby increase the resulting wine's alcoholic content. European Union wine law is extremely stringent, and each region has a number of guidelines a winery must meet to list that region on its label, including a minimum alcohol content. While adding sugar post-fermentation is almost universally illegal, EU law does allow winemakers a certain amount of leeway vis-a-vis chaptalization; the process is de rigeur in the colder regions of Europe, and in rough years, gives more southerly growers a bit of a safety net. The vintners in question were found to be adding more sugar than Beaujolais allows, which is only enough to raise the final alcohol content by two degrees.

Though two years in jail may seem like a stiff penalty for buying and selling sugar, it serves to highlight how seriously the Europeans take their wines. The laws are in place to ensure that wine remains a natural product, reflecting the place, the land, and the essence of the vintage in which the grapes are grown. The addition of excess sugar is the first and easiest step towards making manufactured wines; that is, wines not made in the vineyard, but in the lab, where sugar plus yeast plus the right combination of additives might someday yield a wine-like product as cheap and consistent as Pringles.

There is more than a teaspoon of hypocrisy in this mentality. I would never begrudge a winery a few hundred pounds of sugar if it makes the difference between 10,000 gallons of salable product and an equivalent amount of juice bound for the distiller —  but even in legal amounts, can a wine with added sugar really be said to be "authentic?" For that matter, can any wine, in a time when computerized irrigation, pharmaceutical grade agrochemicals, DNA profiling, specially bred yeast strains, mechanized harvesters, frost fighting helicopters, and countless other 20th and 21st Century advances are commonplace in vineyards around the world? Shoot, even most "organic" producers use copious amounts of man-made copper and sulfur compounds little more than a hundred years old!

It is easy and common to romanticize wine, but in the end it is a consumer product, and one that drives a multi-billion dollar industry. As international competition grows more heated, expect scandals like this to become more commonplace, and don't read a wine's place of origin as an indicator of quality, good or poor.  Of the suspected 600 tons of sugar transported by the Beaujolais ring, only a small amount was found to have been used in Beaujolais. The rest could very well have ended up in the storied appellations of northern Burgundy, or Bordeaux, or any number of other respected French appellations, and we might never know.

I'm amazed. 2 years in jail for making wine differently than the government wants you to? This kind of thing could easily be resolved with an independent testing organization. If you want to have the "Real Beaujolais" seal of approval, then let the organization monitor your production. If not, then you don't get the seal. Think of UL registered products. No guns or jails are necessary.

If someone can make a product that is indistinguishable from a fantastic Bordeaux in a beaker, who really cares if it's authentic or not?

I assume that we Americans do not subscribe to such a shortsighted mentality. If the state of California has not declared bankruptcy yet, they should immediately fund a massive research effort to clone classic French wines in a laboratory. We would then become the largest wine exporter in the world, saving California's doomed economy.

And, since we won't need French wine anymore, we would be able to sever all diplomatic ties to France, finally getting them back for always being mean to American tourists in Paris.