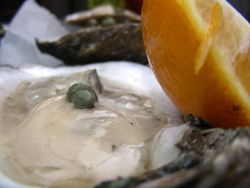 I enjoy his restaurants, I dig his show and I love his enthusiasm.  I even love the way he beats the crap out of the English language.

But for all the sophisticated techniques that Andres and his chefs use at his restaurants, particularly Minibar, it was a rather simple one that has become my new favorite.

During a recent episode of Made in Spain, Andres was demonstrating how to shuck an oyster. Before prying the shell open, he placed the oyster in a hot pan with a small amount of water. After a couple minutes in the steamy water bath, the oyster opened its shell -- "to see what was happening" -- making it much easier to shuck.

Genius. The oyster was still raw, but the shell opened like an unlocked door.

Any novice oyster shucker will tell you opening those shells is a pain in the ass. If you're lucky you'll find a small gap to stick the knife in and crank the shell open. Otherwise, you gotta work at it. The guys who shuck oyster for a living are pros who make it look easy. I'm no pro. And as much as I love raw oysters, I'm rarely in much of a mood to fight my way through a bushel or two of obstinate bivalves.

After watching Andres' hot-pan approach, I was newly inspired. If a bit of steam and heat will open an oyster shell, so too should the smoke and heat of a grill.

Like I said, I love raw oysters, but I also hate buying them in restaurants around here. Having grown up in Florida, I was used to paying next to nothing for a fresh dozen. So the idea of paying $2 an oyster drives me crazy. I do so from time to time, but I hate it.

Now, if you're willing to shuck your own, you can head down to the wharf and pick up a dozen for $8 ($7 if you can talk the guy down). The oysters are beautiful and there are few better ways to spend a Saturday morning than wandering among barkers and blue crabs on Maine Avenue.

When I headed down there last weekend, I was feeding three people (my wife, my buddy Tim and myself), so I bought three dozen Chincoteagues. This might sound like a lot of oysters, but we devoured them in short order.

Like Andres, I didn't want to cook the oysters, so I placed them at the outer edge of a hot grill. I also tossed on a couple handfuls of wood chips to get the fire smoking.

And sure enough, four minutes of smoke and fire, and the oysters eased the grip on their shells. The

smoke didn't add much flavor, which was good. Not only do I like the flavor of oysters, but I also tasted a couple I shucked before sticking them on the grill. No bueno. They were all smoke and no oyster.

Despite their freshness, the Chincoteagues weren't all that briny. So I added a couple capers and a bit of caper juice to each oyster. I finished them off with a squeeze of Meyer lemon juice. Sweet, salty, sour and delicious.

Just to gild the lily, I picked up a few Bell's HopSlam ales to wash it all down. The crisp bite of the hops worked well against the sweetness of the plump oysters. Folks, I don't know how you spend your Saturday mornings, but mine was probably better.

If you're using a gas grill, you're going to need to create a foil pouch for your wood chips. Steven Raichlen offers some great tips on this technique on his Web site.

When your coals are ready, toss a couple handfuls of wood chips on the fire. Now, remove the oysters from the refrigerator and place them in a ring around the outside of the grill grate (oysters that aren't ready to go on the grill should remain in the refrigerator). Place the lid on the grill and smoke for four minutes.

If you're using a gas grill, place the oysters on the cooler part of the grill when the foil pouch has started smoking. Close the lid and smoke for four minutes.

Once the four minutes are up, remove, shuck and place the oysters on a bed of ice. Before eating, add the capers and lemon.

You know, I like Jose Andres' restaurants, but I cannot handle listening to him on his show...and I have an accent myself ;)

Love oysters. The last ones I had were in Savannah: YUM: http://mangotomato.blogspot.com/2009/01/dinner-at-olde-pink-house-savannah.html