There was a time when the buyers at the shop I work at would never even consider carrying a seven dollar wine; we were too high class for that. Oh, sure, we had five dollar White Zin, and magnums of your usual Chilean Saturday-Night-Special, but these were de rigueur, things you had to have around for your run of the mill winos out there: serious wine drinkers need not apply. Fast forward to five years later, and even the consummate wine snob is looking for a pleasing, sub-$10 alternative. The numbers are in folks, and though growth might be down, the liquor industry is one of the few still posting an increase during these trying times, fueled mostly by greatly increased volume at the lower end.

While your established mass-market brands like Gallo, Almaden, Franzia and the like, will always dominate the "value wine" field, importers and distributors are increasingly looking to invade said market, and maybe even bridge the gap between first-growth Bordeaux and box "Chablis" drinkers. Importer/distributor Winebow deserves some big ups in this vein for recently introducing Castillo de Monjardin to East-Coast oenophiles. 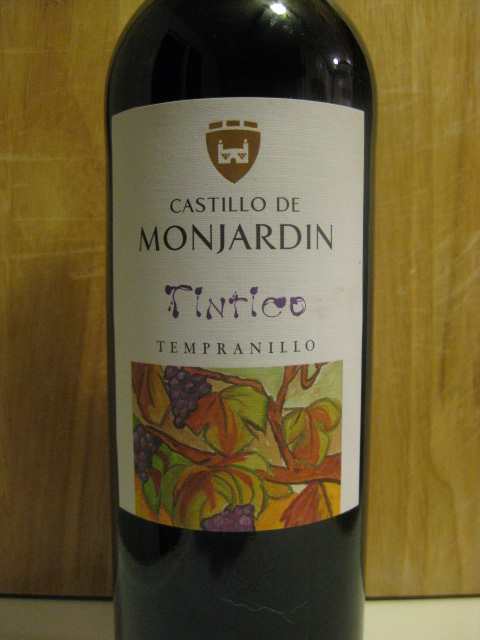 Castillo de Monjardin occupies a 350+ acre estate in the region of Navarra in northeastern Spain, near the French border. Winemakers have migrated between here and the storied vineyards of Bordeaux for centuries, and as such, Navarra has a rich winemaking tradition. Castillo de Monjardin was planted in 1986 with an assortment of French and native Spanish varietals, producing its first bottling in 1991. Though the winery fields an impressive array of wines, its most impressive is also its most humble, the Tintico Tempranillo 2006. Made from a 200 acre block of the estate's prized Tempranillo grapes (one of the country's native gems), this wine gives an amazing amount of aroma and flavor for such a modest price.

Tempranillo is one of those grapes rarely seen outside of it's homeland. Like the Italian classic Sangiovese, this grape fairs poorly in the western hemisphere, but works wonders in its native soil. Being relatively neutral by nature, Spanish winemakers have taken various steps to make their Tempranillos sing. The Tintico is the purest expression of Tempranillo one is likely to find, being completely unoaked, and grown in the grape's historic heartland. On the nose, this wine give up copious amount of raspberry, plum, earth and herbs, along with a pleasing savory characteristic reminiscent of roasting meat. The front palate is dominated by the wine's more savory aspects, which quickly give way to a combination of black currant and black pepper, leading to a relatively lengthy, bitterly tannic, dirt accented finish.

My brief description really doesn't do this wine justice. To ameliorate that, let me just say that for the price, you are very unlikely to find a wine quite as much power and finesse at the same time. Normally, I would never advocate a $7 wine with steak, barbecue, or other hearty fair, but this one has the heft to stand up to almost any dish, without coming off awkward or overwrought in the process. In many ways, the Monjardin Tintico is the perfect Recession Refreshment for the upcoming barbecue season. The importer has been very effective in getting this one out there, so it should be readily available at most quality retail outlets. If you are a fan of big foods, but loath the heavy wines they call for, this wine is your savior. Conversely, if you really crave an expensive California Cab with your red meat, go ahead and give this one a shot; seven bucks really isn't that great a gamble, and I guarantee you will be disproportionately rewarded.

Thanks for the great tip--any idea where to find this in the area?

I know for fact that it is available at Wine Specialist and Rodmans, and I think I also saw it at Total Wine. Will see if I can get more info on that next week.

I love this entry! I have recently been on a quest for recession friendly food and wines. Thanks!

Mmmm, I love tempranillos. Also those mixed with cabsav or grenache. Cheap, too -- I've seen them at Harris Teeter and either Safeway/Shoppers.

Mmmm, I love tempranillos. Also those mixed with cabsav or grenache. Cheap, too -- I've seen them at Harris Teeter and either Safeway/Shoppers.