Gambling on a Chinese Wine; or, Pai Gow for the Palate. 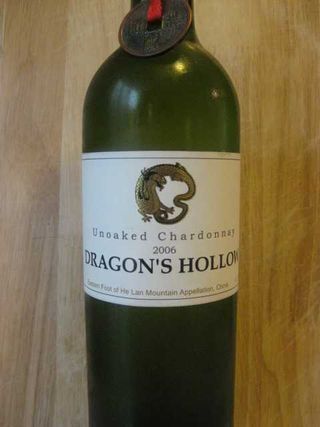 I am a big fan of underdog wines. Oh sure, it's great to pick out a good California Cabernet, or a French Burgundy, but those are a dime a dozen, and by most accounts, 'good.' Granted, they aren't all superstars, and some are gonna be pretty boring — but by and large, thanks to decades, and sometimes centuries of practice and investment, winemakers in these places can consistently turn out a drinkable product. Now where, may I ask you, is the fun in that? True, you can go get your bottle of Oregon Pinot Noir and be pretty sure it is good, but will you have the same satisfaction as the man who gambles on a Virginia Cabernet Franc and gets a winner? Variety is the spice, friends, and nothing is more variable than wines from your 'lesser' appellations. Bearing this in mind, you can understand my thrill when, on my recent visit to upstate New York, I came across Dragon's Hollow Unoaked Chardonnay, a bottle of real, honest to Mao Chinese Wine! I'd been looking for one of these for ages, and snapped it up, throwing down my $12.99 with a grin.

Dragon's Hollow — clearly named and marketed for an English speaking audience — is made in the foothills of the He Lan Mountain in north-central China. Once a vast expanse of desert, the area now hosts a 6,000 hectare vineyard, thanks to heavy investment from the importer, Broadbent Selections, which owns 50% of the venture. Planted with familiar French varietals such as Chardonnay, Riesling, and Cabernet Sauvignon, Dragon's Hollow is one of the larger examples of the new 'Chateau-style' wineries popping up all over China. Though the Chinese wine industry is huge (seventh largest in the world, by some estimates), with a winemaking tradition dating back to the seventh century AD, it is largely constituted of state-run mega vineyards, producing bulk wine for a huge population just awakening to wine's pleasures.

An estimated 90% of China's wine needs are fulfilled domestically, so one almost never sees a bottle on American shelves (seriously, I'd been looking for ages). Oh, and as an added bonus, the wine comes packaged with this neat, Chinese looking coin thingy (made from real metal!), which pretty much sealed the deal. I managed to fight my curiosity for a couple of weeks, but finally opened the bottle last night.

The Dragon Hollow Chardonnay 2006 is light gold-yellow in color. The nose is rather complicated, giving off notes of green apple skins, pear, tropical fruits, and white cake. On the palate, the wine is less promising. The attack is dominated by an odd, limey, chemical sweetness that strikes the very front of the tongue. The sweetness loses out to more bitter, acidic qualities on the mid-palate, becoming extremely acidic on the finish, to the point of eclipsing any flavors that might be tasted. While the nose is pretty pleasant, the wine is extremely unbalanced on the palate, and though it would almost certainly come off less-so with food, there are any number of similarly priced wines that will bring more to the table.

It is pretty clear to me that this wine has been acidified to too great a degree, and perhaps adulterated in other ways, to boot. Therein lies the major problem with your lesser known appellations: in addition to lacking the prestige of your better known vineyards, these areas also lack the standards, often allowing for much higher crop yields and much more manipulation than we've come to expect.

If you like what you've read, or are just curious, I'm sorry to say that Dragon's Hollow appears to only be available in New York and California — Broadbent is a big importer, though, so expect to see it here in the relatively near future. Though I am not impressed with this particular bottle, I am still curious to taste more Chinese wines in the future, and am keen to know if any of you out there have tried any others. And looking on the bright side, the Dragon's Hollow wasn't a total loss, as that little coin-dealie is gonna look awesome hanging from my rear-view mirror.