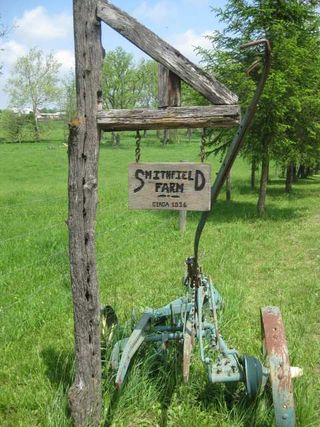 Though I can't say I grew up in a rural area, I was definitely far enough away from an urban center to have first hand experience with "farms." When I was quite young, my parents once took me to Stony Kill Farm, a New York State educational farm. Being, oh, five or so, I didn't give a second thought to the cows and chickens, wandering about like they owned the place. (Also had my first experience with an electric fence that day — parents, just let your children grab it. You know they want to, and they gotta learn sometime). By synthesizing the things I saw that day with the information gleaned from my Richard Scarry books, I came to the conclusion that this is just how farms are, and that that pork chop I'd eaten the previous day came from such a place, and may or may not have once been a pig in a hat with talking worm friend.

However creepy this may have seemed to me at the time, the real origin of my meal was probably far more disturbing. I don't have to tell you all about the hideous conditions under which most animals are raised, and this recent Swine Flu H1N1 thing is just the latest incarnation of the virulent side effects. The animals themselves are certainly not in any position to wander, and I am pretty damn sure they have neither hats nor friends. 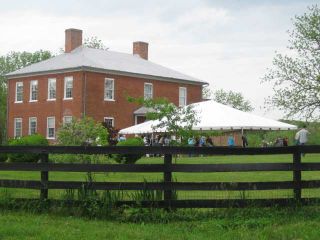 But there are some people doing it right. If any of you frequent the area's numerous farmers' markets, you've no doubt come across Smith Meadows, purveyor of fine grass-fed meats and awesome homemade pasta out of Berryville, VA. Last Saturday, in an effort to educate and connect with their customers, the Pritchard family and their staff threw open the doors and fields, to "extend a hearty welcome to all visitors who want to see a contemporary 'Old-Fashioned Farm.' " Promising field tours, cooking demonstrations, and catered lunch featuring pork and beef barbecue, the event sounded promising, so Eliza and I made the hour's drive out to the West Virginia border for the 10:00 start time.

Arriving promptly at 10:15 (yeah, we overslept), we converged on the main house (which operates year-round as a B & B) with about forty others for the beginning of the tour. The group was led by Forrest Pritchard, who with his sister Betsy and several other family members, runs the daily operations on the farm. Over the course of the next hour and a half, Forrest took us on a tour of the the smaller Virginia portion of Smith Meadows, whose 500 acres straddles the VA/WV line. 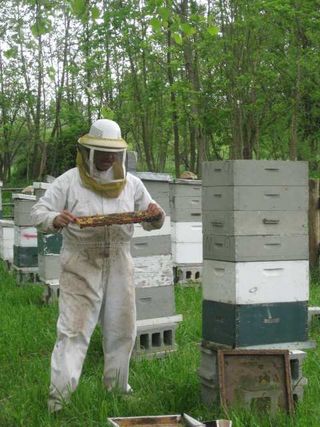 About a hundred yards up the driveway from the main house is the apiary, the first stop on our tour. The small collection of hives and their maintenance are contracted out to Eric Lindberg of nearby Rock Ridge Farm and Apiary, who personally comes to tend the hives every week or so. The eight colony towers set up along the creek provide enough insects to pollinate all the plants for about a mile around. According to Forrest, Smith Meadows is essentially a grass farm, with the animals there to just do the mowing, so making sure the native plants are properly pollinated is rather important.

Though bees are great and all, the gaggle of children in the group quickly grew restless, requiring something a bit bigger, and, oh, "farmier" to hold their attention. We trucked onward to the southwest quadrant of the pasture, and into an antiquated apple orchard-come-pasture with pigs in residence. Smith Meadows pastures about 150 to 175 of these guys every year, most of which grow to nearly 300 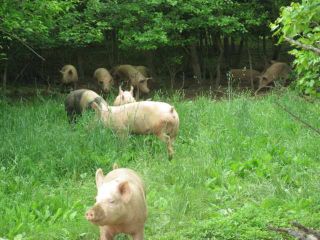 pounds. Unlike industrially raised  pigs, which subsist on any number of animal byproducts and other undesirables, Smith Meadows' pigs live on a combination of soy, corn, barley, and what they find in pasture, which may includes apples, mushrooms, and to my surprise, mice. The hogs are kept until their 11th month, at which point they are butchered locally at Horsts Meats of Hagerstown, MD — these two pictured at left probably made the trip this week. It was both heartening and bizarre to see pigs living so naturally. Though it is easy to forget, standard pigs are only a few generations of selective breeding away from their wild ancestors, and are quite clearly as comfortable in the woods as in a wallow. 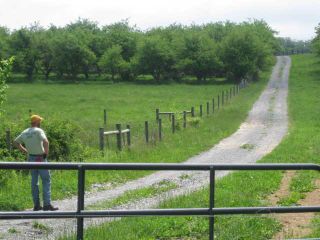 The curious animals followed us a good ways towards our next destination, pasture land to the north currently hosting the farm's cattle herd. Conspicuously absent were the men on horseback and in pickup trucks, those icons of the American beef industry. Also absent when we arrived at the gate were the cows, which Forrest soon remedied with a few loud bellows of "Here Boy!" or something to that effect. Within 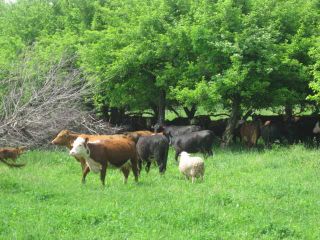 minutes there was a thunderous chorus of "moos," and soon after several dozen pairs of bovine eyes watching us cautiously from a copse of trees. Forrest explained that the cows are conditioned to follow his call to new pastures, making the entrapments of industrial herds unnecessary. The farm raises about 200 to 225 head of cattle per year, most of which are hybrid breeds, whose inherent vigor give them good size and meat quality without the need of hormones or feed lots. Veal calves are also kept with the common herd; one little guy ran a circuit, back and forth, following us as we left the pasture. 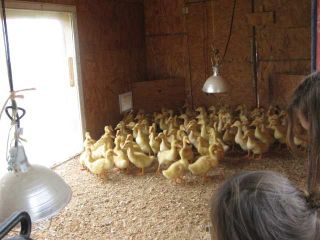 The last stop before lunch was the poultry section to the northwest of the main house. Though they do not breed on premises, Smith Meadows raises sizable flock of laying hens, meat chickens, turkeys, and as of very recently, ducks. The chicks are brooded in re-purposed farm equipment, and then pastured for forty days in special hutches. Through regular fence movement and clever design, the chickens stay growing and healthy without the need of antibiotics or supplements, and the earth is not overworked by their presence. Thanks to an exemption in USDA rules, Smith Meadows is allowed to slaughter their own poultry, which they do in a clean, modern processing center just to the west of the hutches.

At this point it was nigh on 1:00, and with the tour over, we retired to the big tent for an outstanding lunch of beef barbecue, pork ribs, and accouterments, all from Smith Meadows, with greens from nearby Spring Meadow Farms. To follow would be cooking demonstrations, house tours, and lectures, all of which were added value to an already worthwhile morning.

It's easy to get self-righteous about the whole natural foods thing without really understanding why. Sure, there are lots of books on the subject, and gut instinct goes a long way, but all of that pales compared to seeing the situation for oneself. In the end, I know that most of those animals are bound for the table, but at least in the meantime, I now know firsthand that they lived with dignity, and without physical or psychological discomfort. So too do I know the meat is healthier, from seeing the animals, and the conditions in which they live. Perhaps most importantly, I now know firsthand that when I buy products from Smith Meadows, I am supporting some really friendly, cool people, with a great perspective on food and business. Thank you much to the Pritchard family and everyone else at the farm — in my mind, Farm Day was a huge success, and I hope you do it again next year.

I don't have to tell you all about the hideous conditions under which most animals are raised, and this recent Swine Flu H1N1 thing is just the latest incarnation of the virulent side effects.

exactly what do you mean? the only confirmed cases of H1N1 in pigs - in Canada and more than a week after the human outbreak first made news - appear to be cases of human to pig transmission. while it is possible that factory farming of pigs created conditions for the emergence of this strain of H1N1, there is no evidence that this was actually the case.

Smith Meadows is one of my favorite famers market vendors, so it's great to hear more about their farm. I'm kind of bummed I forgot about their open house.