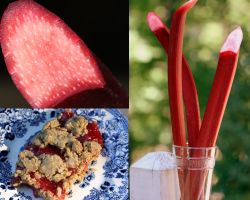 Heard around the DC Foodies blogosphere this week...it could have been called Lunchgate, or Mustardgate, or Medium-wellgate. Whatever you call it, seems like just about everyone had an opinion about POTUS and VPOTUS visiting Ray's Hell Burger in Arlington for lunch. Just in case you've been hunkered down beneath the Capitol in that underground bunker Visitor Center all week, see here, and here and here for a few morsels of local coverage.

Culinary Couture writer Lemmonex, tells it like it is. Responding on her blog to a comment that DC is among the worst Metro areas to eat, she responded: "Thusly, I do feel it appropriate to expound on the inherent goodness of one of my favorite restaurants in DC, Proof." Lemmonex recommends the charcuterie plate as a part of any visit to Proof, and opines that the duck confit is decadent, while the cookie platter is a delight.

For more on Proof, head over to Metrocurean where Melissa McCart went behind the kitchen line to interview Chef Haidar Karoum. McCart made her visit just in time to get a big whiff of pungent ramps, being prepared for ramp kimchee, and used to accompany pork belly served on black sesame brioche. The dish will be paired with inspired cocktails made by some of DC's most talented mixologists as part of World Cocktail Week.

For more on Melissa McCart, check out this week's Washingtonian Blogger Beat, where she is featured. In an interview, McCart shared here favorite wine and food pairing (at Adour) and favorite thing to cook at home (pizza).

Finally, let's roundup some seasonal recipes on the blogs this week. First, after celebrating his blog's first anniversary, Pete Bakes made a Rhubarb Tart with Orange Glaze, while The Arugula Files used rhubarb to make something you probably won't see in the cereal aisle; Rhubarb Pop Tarts to accompany Orange-Corriander Ice Cream. Arugula Files brainstormed about this combination all week, as part of a food blogger contest she entered, so go over, check it out, and give her your votes!