The Darby Flower: the best cocktail you haven't had ... yet

This is the Darby Flower. It’s good. Damn good, actually. And it’s mine.

Go ahead, look up the name, you won’t find it. Look up the combination of ingredients and proportions. You won’t find a cocktail that matches (at least I didn't). If you do, let me know and I’ll give credit where credit is due. Until then, it's mine, baby. All mine.

I came up with the drink back in March while taking a bartending class taught by Derek Brown -- bartender, writer, cocktail historian and all around nice guy.

Brown is the head bartender at The Gibson, and an ambassador for the Museum of the American Cocktail (OK, I don't really know what that means, but it's a pretty neat title). The man knows from a cocktail. If you get a chance to take the class he teaches at CulinAerie, do it. Even if you know the difference between a pony and a jigger, you’ll learn something the guy's class.

The three part course wrapped up with Brown pairing us off into groups to invent a new cocktail, which would be judged by Brown, chef and CulinAerie co-owner Susan Watterson and Going Out Guru Fritz Hahn. In the back of the classroom were our implements: a table full of liquors, bitters, fruit and mixers. The only rule was we had to use gin (Hendricks).

Before we got started, Brown gave us the pep talk: it's very difficult to invent a cocktail. First of all, you have to concoct something that people will want to drink. Secondly, it has to be an original combination of ingredients and proportions. Therein lays the problem. Bartenders have been mixing drinks for a long time, so coming up with one that someone else hasn’t already made is daunting. As Brown tells it, every time he thinks he’s come up with a new libation, he inevitably stumbles upon "his" recipe in some dusty old cocktail book.

With that boost of confidence, he set us lose to achieve what he has not (so far).

As I considered the table of ingredients trying to figure out a plan, I noticed the pint of little orange kumquats. Growing up in Florida … No, growing up in Dade City, Florida, I am familiar with the kumquat, an oblong citrus fruit whose name may well be better than its flavor. Most of the kumquats you see at the grocery store came from dear old Dade City. (Our gift to you. No thanks necessary.) When I was a kid, everyone I knew hated these things. The tiny, tart fruits made better projectiles than snacks.

So when I saw the pint of kumquats, I knew I had to use them, if for no other reason than a laugh. Besides, it wasn’t as if I was keeping them from anyone else. Brown also provided a bottle of elderflower cordial, a French liquor that I had absolutely no experience with.

With ridiculous fruit in one hand and an unknown spirit in the other, my two teammates and I set off to make a mess, but came away with a winner. Of course, that was after several rounds of questionable cocktails. I'd mix one and my teammates would taste on comment (usually the looks on their faces said enough). By the sixth or seventh iteration, we knew we were on to something. The tartness of the kumquat juice was balanced by the sweetness of its zest, the elderflower and the simple syrup. The drink was rounded out by the gin (drier the better) and a few dashes of Angostura bitters. All in all, it was -- and is -- a pretty solid cocktail.

As pleased as I am with the result, the drink really is the product of pure dumb luck. But, boy dumb luck tastes good.

Like I said, this bartending class was back in March, which wasn’t exactly the ideal time of year to enjoy a refreshingly sweet, tart cocktail. Now that it’s June and we’re just starting to climb toward the 90s, the Darby Flower is ready for its public debut. (Incidentally, the name is a combination of Darby, the tiny area near Dade City my family moved to way back when, and flower, for the elderflower in the drink). 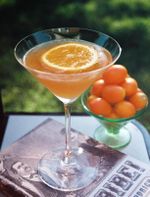 2 oz. of gin (the drier the better, but Hendricks is fine)
1 oz. of elderflower cordial
1/4 oz. of honey simple syrup
Zest of 2 kumquats
Juice of 2 kumquats
3 dashes of Angostura bitters

Combine the ingredients in a shaker, including the juiced kumquats, and muddle. Add ice, stir, shake (Yup, both. Trust me.) and serve neat with a thin slice of orange or a twist.

Yum! Can't wait to try it - and why do I want to try it? Because, one of the names I have picked out for my future child is Darby. Thanks for posting and I'm looking forward to taking the course at CulinAerie which is very close to my home.

That's fantastic, Hedda. I hope you enjoy the drink and the class.

quick question about the Elderflower cordial. Is it the liqueur (like St. Germain) or the non-alcoholic concoction from a brand like belvoir? can't wait to try this.

Good question, PFM. St. Germain was the brand I used for this recipe, but any brand of elderflower liqueur is fine. The real variable is the gin. Because there are a few sweet components in the cocktail, a drier gin works best (Beefeater, Bombay Dry or Old Raj Dry). So steer clear of sweeter products like Old Tom, and the herbal gins, like Tanqueray, Rogue, or G'Vine. The middle of the road gins like Hendrick's, Plymouth and Junipero would also work just fine.

Interesting, this drink is not in my 1001 drinks book but will definately have to try it.