On Wednesday, I hopped on the metro after work and headed over to the Foggy Bottom Farmers Market.  I had heard both good and bad things about this particular market, with some people saying their prices were very reasonable while others said the vendors were rude and standoffish.  I had also read one of my favorite vendors, Cavanna Pasta, sold at Foggy Bottom and I needed a fix of their porcini mushroom ragu.  The market is located directly at the metro station, beyond the quaint wrought iron gates that flank the atrium.  As I walked closer to the market, I could tell it was one of the smaller FreshFarm markets.  I could only see about a half dozen or so tents, one of which was the familiar Atwater's bread display (seriously, are these guys everywhere????).  I also noticed there wasn't an ATM near the market, which annoyed me just a little.  I have a theory about a good farmers market location:  it's near an ATM (because who carries cash around anymore).  I had to walk around Foggy Bottom until I finally hit upon a Bank of America and then head back to the farmers market.

I glanced over at the Atwater's tent, but didn't linger since we already had a loaf of multi-grain bread from Panorama.  Instead, I headed straight for a table overflowing it seemed with asparagus, spring onions, tomatoes, new potatoes (some of the first I have seen at the markets this year) and strawberries.  There were three employees standing behind the table, conversing with each other but ignoring the customers milling about.  I didn't see a sign indicating the name of the farm nor any information about their farming practices.  I was about to ask one of the employees a question when two of them walked away from the table (I assumed to go back to their truck).  The remaining employee was helping another woman, so I headed in that direction.  While waiting to ask about their farm, I noticed they had beets and radishes.  These were some of the first rather large stalks of beets I'd seen for the season.  Their stalk greens were large and vibrant while the beets were a perfect size for slicing.  I was just about to pick up a bunch when I overheard the employee rather rudely tell the lady in front of me "Well do you want these or not" in an exasperated tone.  When she still seemed to be deciding, he threw down the bag of tomatoes and walked away.  She looked dumbfounded by his behavior, as was I.  Admittedly I hadn't been paying attention to the conversation before that scene, but his response was brusque to say the least.  When another person tried to ask how much the asparagus was (there wasn't a sign), the employee snapped and said "There's a sign over there", pointing to a sign nowhere near the asparagus.  He gruffly rung up another customer, throwing her strawberries in a bag without any care and then turned his back away from the table.  Even though I was more than hesitant to speak with him, I still wanted to know the name of the vendor and at least if they used chemicals in their farming practices.  I went over to where he stood and said "Hello", trying to get his attention.  Nothing.  I repeated my greeting, adding "Can I ask a question please?".  Nothing.  I tried one more time only to be greeted by him walking to the other side of the table to move around some of the radish bunches.  I'm not sure if the employee was overwhelmed or just having a bad day, but his behavior left a bad taste in my mouth.  Although I wanted to get some beets and strawberries (both of which looked beautiful), I opted against it and kept on. 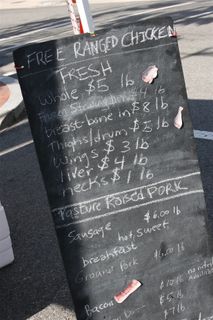 I needed some eggs, so I was happy to see a small table with cartons of them lining the front.  I stopped by and the lady manning the tent said "Hello".  Considering my previous experience, I was quite happy to respond enthusiastically to her greeting.  I learned the vendor, Haskins Family Farm, was new to Foggy Bottom and they were based in Middletown, Virginia. They specialize in poultry, heritage turkeys and some pork products.  Their animals are raised humanely and are not given antibiotics, hormones or specialized (read engineered for growth enhancement) feeds.   Like more and more smaller farms in the Mid-Atlantic region, Haskins Family Farm isn't certified organic but uses organic and sustainable methods in their farming practices.  She said they also have a small orchard and sometimes sell the fruits from that as well.  They sold both whole young chickens, as well as the various parts one expects to be able to buy (although I wasn't aware chicken necks were so popular).  She also had a good selection of pork products, including sausages (hot, sweet and breakfast), ground pork and bacon.  Since I was planning on picking up most of my meats from Red Apron at Penn Quarter the next day, I decided not to get anything but the eggs from Haskins.  She told me I could bring back the carton next time I came to the market since they encourage their customers to reuse them.  A line was starting to form behind me, so I thanked her for talking with me and left with my eggs. 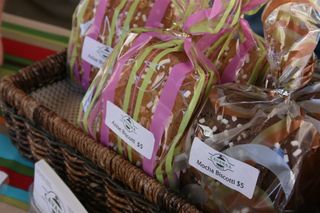 Cavanna Pasta was right next to Haskins, so I stopped to see what they had.  The lady at the stand immediately remembered me from my trips to the Arlington Farmers Market.  "You're the camera girl", she said smiling.  I nodded, lifting up my camera to show her she was right.  I told her I knew I wanted three containers of their fettuccine but I wasn't sure what else I might want.  She told me to take my time perusing the list of products on the table.  This is when I also noticed a rather colorfully decorated box of baked goods on the table.  Apparently Cavanna makes biscotti...who knew.  She offered me a taste and although I'm not really a fan of biscotti, it was pretty good.  The mocha biscotti had a bit of a crunch to it, but I assume that's perfect for dunking into coffee.  I asked her for a tub of their porcini ragu and she shook her head.  "They don't let me bring that here," she responded.  Because the porcinis used in the ragu are imported from Italy and not from a local vendor, FreshFarm doesn't allow Cavanna to sell it at their markets.  She assured me the porcinis they use are grown without pesticides or chemicals; they just prefer the richer taste of the Italian porcinis for their ragus.  Since I have been lucky enough to cook with Italian import porcinis, I completely understood Cavanna's preference for them.  They have a deeper, stronger earthiness than any other porcini I have ever tasted and I now understood why I so loved Cavanna's sauce.  She told me to come out to Arlington and stock up on the porcini because it freezes and reheats nicely.  I decided to pick up one of their raviolis as well, asking her for a recommendation.  She pulled out their Pansoti ravioli, filled with ricotta, parmesan and spinach, telling me it was a simple but delicious pasta.  "It works with any sauce, but it also tastes just as good with a sprinkling of parmesan over it," she told me.  I added that to my fettuccine purchase, thanked her and headed on. 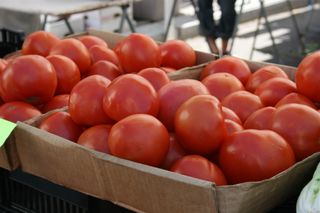 I saw other familiar faces, including Chris's Marketplace and Quaker Valley Farm but the market was rather small.  This was definitely a neighborhood market, meant for quick pick ups of fresh produce, meats and bread for mid-week needs. Except for the first vendor (whose name I'm still not 100% sure of and I don't want to speculate and get it wrong), everyone else at the market was friendly.  I did notice that the prices at that first vendor seemed a little higher than at other markets (more in line with Dupont Circle prices), but the other vendors' prices were the same as at other markets.  I left having only picked up a few items, knowing I could pick up whatever else I needed at Penn Quarter the next day.  I ended up getting some lovely beets and salad greens, which I combined with some Cherry Glen Monocacy Silver goat cheese and walnuts I picked up from 14th & U farmers market to create a great seasonal salad.

Because this is the beginning of the Spring and Summer big harvests, I thought it would help to let everyone know what's new around the markets.  Each week I'll end the posts with a list of new items I've seen in the last week or so.  I have decided to cleverly call it:

In the coming weeks, I will have recipe ideas for the Summer squashes and their blossoms! 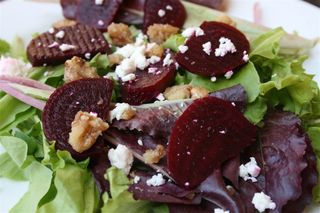 Remove the beet bulbs from their stalk (save the greens - they make an excellent pesto), trim them and scrub them.  Cut them in half and place them in a medium sized pot.  Fill the pot with enough water to cover the beets and bring them to a boil.  Cook them for 25 to 35 minutes or until they are tender.  Drain and allow them to cool.  Once cool, slice them (not too thin but not too thick either) and set aside.

Rinse off the salad greens and divide them among four plates.  Top with the the sliced beets, goat cheese and walnuts.

You can top the salad with a simple vinaigrette, but I simply reduced down the liquid from the beets and drizzled this on top of the salad.  This salad goes great with the aforementioned pesto, which I would have photographed had my boyfriend not devoured it.

The Foggy Bottom Farmers Market is located on I Street between New Hampshire and 24th Street in Northwest DC and is open every Wednesday from 2:30 to 7 pm.

There's an ATM at the 7-11 on the other side of the market, and some of the vendors (Quaker Valley, Cavanna) take cards. I LOVE Cavanna's pesto-gogonzola gnocchi.

I will definitely have to try Cavanna's gnocchi! I've loved every pasta and sauce I've tried from them. But I make it a point not to use ATM machines in convenience stores/gas stations because their fees tend to be higher than bank ATM fees. They are also more susceptible to fraudulent tampering (my Dad's a cop so I know WAY more about such things).

I meant I know WAY more than I want to know about such things...I wasn't trying to sound like I had superior knowledge about scams because I commit them.

I love that beet salad recipe! Yum! And, while I love the Foggy Bottom Farmers' Market, I just heard that there will now be a Glover Park/Burleith Farmers' Market at Hardy Middle School on Wisconsin Ave. Very exciting!

What a wonderfully thorough write-up! Thank you!

And when im feelin incomplete your my Roll forming machine missing piece. And when you need your
forming machine breath taken away ill be your thief.