To most of you, the names Michael Pollan (The Omnivore's Dilemma, In Defense of Food), and Eric Schlosser (Fast Food Nation) are familiar, and I imagine a lot of you subscribe to their respective philosophies. For you, Robert Kenner's new documentary "Food, Inc." will not prove terribly revelatory. If, however, you don't know these men and their works, are at all curious about the origin of your food, and dare to think what lies beneath the label, this film will leave you shaken.

Pollan and Schlosser (the latter a co-producer) act as guides, leading the viewer through a series of chapters, each focusing one of the pillars in the temple of modern American food, and the particularly dark shadows that they cast. Over a tight 94 minutes, Kenner takes the audience on a whirlwind tour of what's in their stomach, revealing a good number of hideous truths hidden "behind the veil." Built on the Michael Moore model of expose — explicit imagery, laced with irony, with constant factual context from an omniscient narrator — the film uses the most evocative elements of its source material to shock the viewer into a sense of disgust and righteous indignation. 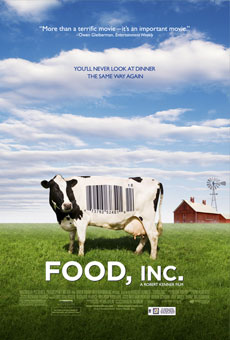 Classically American scenes of the pristine produce aisle and sanitized, plastic wrapped meats are interspersed throughout with scenes of horror — chickens collapsing under the weight of their own over sized bodies; crippled cows being forklifted into abetoires; helicopter shots of acres and acres of fetid, dung-filled feedlots; bleach-white, ammonia-treated hamburger being deliberately mixed into the general supply. The "pastoral fantasy" that Schlosser describes at the beginning of the film is quickly dispelled. As far as the meat industry goes, the pictures speak for themselves.

Probably more horrifying than the visceral imagery is the human element. The film leans heavily on the stories of several farmers, factory workers, and regular Americans whose lives have been devastated, whether they realize it or not, by the contemporary understanding of eating. Amongst the cast of characters is a Perdue chicken farmer (the only one who submitted to interview) who has become allergic to antibiotics thanks to the supplements she feeds her fowl, a family of four who eat at Burger King for breakfast, but can't afford vegetables, and a consumer advocate whose son died from infected meat at the age of three. There are a lot of bodies littering the road to cheap, abundant food, and "Food, Inc." lights them in a truly horrible aspect.


The most poignant personal story, and thereby the most moving sequence in the film, is a series of events surrounding Monsanto, one of the largest seed suppliers in the world. After creating Agent Orange, Round Up, and a series of other highly, um, "effective" chemicals, Monsanto got in the genetics game, and now owns the patent on the dominate corn and soybean varietals in grown in the US, which it monitors with surprising zealotry. Back before the advent of one-use, patented seeds, seed cleaning was a vital industry, allowing farmers to cull some reusable product from their hard-won harvest. So New World Order Monsanto takes on folksy seed cleaner Moe Parr — accused of "encouraging patent violation by cleaning seed" — and I'm sure you can just guess the result.

Of course, a documentary like this isn't really worthwhile unless it offers some solutions. Amidst the crooked politicians and unsavory businessmen, there are a few heroes. Joel Salatin of Polyface Farms brings sincerity and eccentricity to the film, discussing the importance of local, pasture-based foods while slaughtering chickens al fresco. Gary Hirshberg of Stonyfield Farm — one of the nation's largest producers of yogurt, and the leading organic brand in Wal-Mart — touts the necessity of organic farming, and speaks of the power of voting with one's dollars.

The end credits are preceded by a "Inconvenient Truth" style list of life-affirming, results oriented things that the viewer can do to make a difference, which unfortunately ring a bit hollow in the face of everything that came before. The film's major fault may be that it crams a lot of subject matter into its 94 minutes, making the problem loom very large, but without delivering much depth on any one particular topic. But while on the academic side, the food industry may be better covered on paper, it makes for a hell of a slasher film on the big screen.  If you've got a friend or loved one who could stand to lose his lunch, bring him over to Loew's Shirlington or Landmark E Street Cinema this weekend.

For a very readable book that explores many of these issues in a little more depth, check out Paul Roberts' "The End of Food" published in 2008. Very good writing and some insights into how different parts of the global food industry got to where they are today. Will see Food Inc today.

mo_dc eh I tried to read through The End of Food, and honestly I had a rough go of it. Then again, I'm not a huge reader, so it takes a lot for me to be able to get more than halfway through a book.