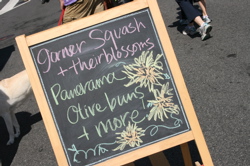 Although farmers markets have been open in the DC area for months now, until recently most of them were still the same size as the Winter markets.  As the weather warms up, however, more and more markets have started expanding in size, offering a wider variety of produce.  One such example of this is the Bloomingdale Farmers Market.  I headed over there on opening day back in May and was a little disappointed to see only a handful of vendors and not a lot of variety.  I returned last Sunday after hearing Garner’s Produce would be selling both English peas and squash blossoms, two things I’ve been dying to get my greedy little hands on this Spring.  Because my previous attempts to get English peas were thwarted, I got up early to ensure I was at Bloomingdale right when the market bell rang.  We arrived at the market about ten minutes before opening, so I decided to roam around and take some pictures before the rush of shoppers hit.  I was quite happy to see a few more stands, giving the market a larger feel.

While Bloomingdale isn’t as large as Dupont Circle (truthfully, few markets in the DC area are), it has grown since last season.  The market has added several new vendors this season, including Stefano’s wonderful jams and pastas at The Copper Pot.  Bloomingdale has also partnered this year with Common Good City Farm, formerly the 7th Street Garden, a non-profit urban garden that provides fresh produce to low income DC residents and an opportunity for urbanites to flex their gardening muscle (in the spirit of full disclosure, I guess I should mention I recently started volunteering for Common Good City Farm).  Not only does Common Good City Farm sell their produce, herbs and plants at Bloomingdale (with proceeds going towards their workshops and programs), they are also going to be performing cooking demonstrations throughout the market season.  I was also very happy to see that Truck Patch had also been added to the Bloomingdale line up.  This gives Bloomingdale another meat vendor (they sell a variety of beef and pork products) and another purveyor of produce (they sell a variety of greens, among other things).  Truck Patch also sells at both the Mount Pleasant and 14th & U farmers markets on Saturdays.  They have quickly become one of my favorite stops for my salad greens and grilling meats (oh yes, Drew isn’t the only one around here fond of a grill). 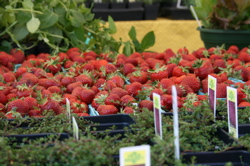 While it was nice to see some familiar faces from other markets, I was excited to see a vendor completely new to me – SnowBear Farm.  SnowBear Farm is located in Round Hill, Virginia and is fairly new to the DC farmers market scene.  SnowBear is a small, certified naturally grown vegetable farm that uses no pesticides or chemicals on their crops.  I hadn’t heard the term “certified naturally grown” before but learned it’s a certification very similar to being certified naturally organic by the federal government.  Because of the high costs associated with becoming certified naturally organic, more and more smaller farms are getting certification through the certified naturally grown organization.  Certified Naturally Grown holds its farmers to the same organic farming method standards as the federal government and performs the same stringent farm visits and tests to ensure all certified farms are adhering to the guidelines.  This gives smaller farms the ability to assure its customers of their farming practices without placing undue financial hardship on them.  Certified Naturally Grown is a non-profit organization that depends heavily on volunteers and donations to keep their operation running and it’s been very successful thus far.  SnowBear Farm, run by the Dunlap family, had a nice selection of different greens, spring onions, scallions and radishes to name just a few of their offerings.  They also had plantings for herbs and tomatoes, for those still thinking about a garden for the Spring. 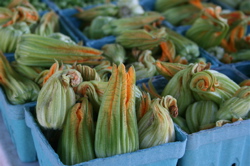 I had never been to Bloomingdale at the opening of the market, so I was surprised to hear a booming voice at 10 am sharp announcing the start of the market.  Something of a town crier, the gentleman proudly announced the addition of Truck Patch to Bloomingdale and let shoppers know of produce new to the market that week.  I should have listened more carefully, but I was dead seat on getting my peas and squash blossoms.  So I hightailed it straight over to Garner’s Produce only to find that my boyfriend had already gotten a container of the peas and squash blossoms for me.  Delighted, I turned my eye to the mound of mini Summer squashes on display at Garner’s.  I got a bag and started throwing in mini squashes, zucchinis, patty pans and whatever else I could get my hands on.  While waiting in line to pay, I saw some lovely stalks of asparagus that were begging to be bought.  I added them to our pile, thinking I could do an asparagus and pea salad for a light side dish.  At the front of the line, I was greeted with a pyramid of rainbow chard, beets and spring onions.  I was tempted to pick up a bunch of the rainbow chard, but surprisingly exercised restraint (considering I already was weighted down with vegetables, I figured I should stop myself). 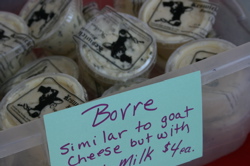 So I had squash blossoms but I had no idea what I was going to do with them.  I had recently watched a certain celebrity chef on the Food Network stuff them and deep fry them but I didn’t like the stuffing she used.  While looking over the cheeses at Keswick, it hit me that one of them would probably work in the squash blossoms.  Since I wasn’t sure which one to use, I asked Sandy Miller which cheese she would recommend for the squash blossoms.  She immediately pointed out the herbes de provence Bovre cheese, a soft cheese, similar to a goat cheese, infused with (as the name suggests) fresh herbs.  She told me the cheese would work well stuffed into the blossoms and lightly fried.  I ended up talking a bit with Sandy and that’s when I learned she used to be a food writer for the L.A. Times (can we say “Stephanie’s dream job”) and a chef in California.  Frustrated with having to hunt down quality produce and meats, she decided to take up farming herself.  The result is the Painted Hand Farm, which raises veal and goat in a humane fashion.  Sandy mans both the Keswick stand and her own Painted Hand Farm stand, which sells a variety of veal and goat products, along with free range eggs.  Before bidding Sandy adieu, I picked up a half pound of Keswick’s lovely whole milk ricotta. 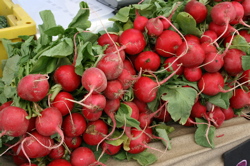 Just as I was about to leave the market, I ran into Robin Shuster, the Bloomingdale market manager.  She was quite excited to tell me about the new market ATM program at Bloomingdale.  Located right at the entrance of the market, the ATM program allows shoppers to swipe their ATM cards and receive a $5 wooden token that can be used at any time during the market season.  Although a small fee is assessed, that fee is used to help fund the Bloomingdale farmers market EBT program (a program that makes fresh, quality produce available to all DC residents, regardless of their income level).  So instead of the ATM fee going to the bank, it goes to help bring nutritious meal options to those who may otherwise not be able to afford it.  I had read about the program in the Washington Post, but didn’t realize it was being implemented at Bloomingdale as well.  Weighed down with produce and information, I headed home to tackle the Summer squash tart I was mulling over all week.

In case you’re wondering what Hakurei turnips are, don’t fret!  I will have more information about them next week and a recipe to boot (unless my fanciful recipe idea is a huge failure). Preheat the oven to 375 degrees and lightly grease a removable bottom round tart pan.

Heat the olive oil in a skillet over medium high heat.  Add the squash and salt and pepper it to your liking.  Sauté the squash until soft, about 7 to 10 minutes.  Remove the squash from the heat and allow to cool to room temperature.

Roll out the puff pastry until it’s the width of a pie crust shell.  Place it over the tart pan and mold it to the bottom and sides of the pan.  Trim off the excess puff pastry.  Brush the pastry with the egg wash and set it aside.

In a bowl, mix together the ricotta, Bovre, egg and parmesan cheese.  Depending on the flavor of the herbed soft cheese you use, you can either add salt and pepper to taste or not.  Because the Bovre is such a flavorful cheese, I did not add any additional salt and pepper.  Evenly spread this mixture over the puff pastry.  Top the cheese mixture with the squash, evenly placing the vegetables over the cheese.  Place the pastry pan on a larger baking sheet and bake the tart for 35 to 40 minutes.  Remove from the oven and allow to cool to room temperature before slicing up the tart and serving it.

The Bloomingdale Farmers Market is located on 1st and R Street NW in DC and is held on Sundays from 10 am to 2 pm.