« Weekly Blog Roundup | Main | Pindar Vineyards: A Nice Place to Visit, If You're in the Neighborhood. » 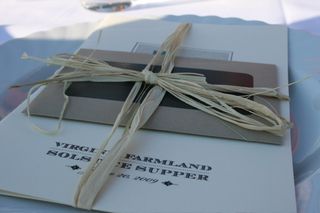 The desire to develop relationships with those who are growing our food has made the farmers market concept popular throughout the United States.  In the DC metro area, there are well over 30 farmers markets (in my neighborhood alone, there are three).  The markets give consumers the opportunity to learn about the farms and the farmers, providing a direct pipeline of information from the farm to the table.  This concept has been taken one step further with farm to table events like the one that was recently hosted by Vermilion Restaurant on the Moutoux Orchard in Loudon County, Virginia.  I had the

Vermilion Restaurant, located in Old Town Alexandria is known for its conscientious efforts to use locally sourced produce, meats, dairy products and other ingredients.  Executive Chef Tony Chittum, a recent Rammy award winner for Rising Culinary Star, seeks out local farmers and producers to partner with, bringing farm fresh ingredients to the heart of Old Town. Out of this partnership came the natural progression of bringing diners to the farm itself for an evening of stellar food and the chance to break bread with those who grew it. 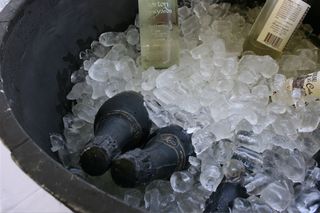 The Moutoux Orchard is a tapestry of beautiful trees bearing the fruit of their famous peaches.  The orchard has been owned by the Moutoux family for three generations and has expanded with its own community supported agriculture program.  Rob Moutoux, Jr. has also begun growing wheat, spelt, rye and barley, using chemical free farming practices.  The Moutoux family graciously opened up its orchard for the Summer Solstice Supper, allowing guests to meander around their orchards and fields.

The event started with a reception in the peach orchard, which included a selection of Horton Wines. After hearing the compliments being bandied around the reception, I decided to try their orchard peach champagne cocktail, a glass of their Sparkling Viognier NV with a splash of their peach wine.  I was pleasantly surprised by the clean and crisp flavor of the cocktail and the immediate essence of peach permeating it. 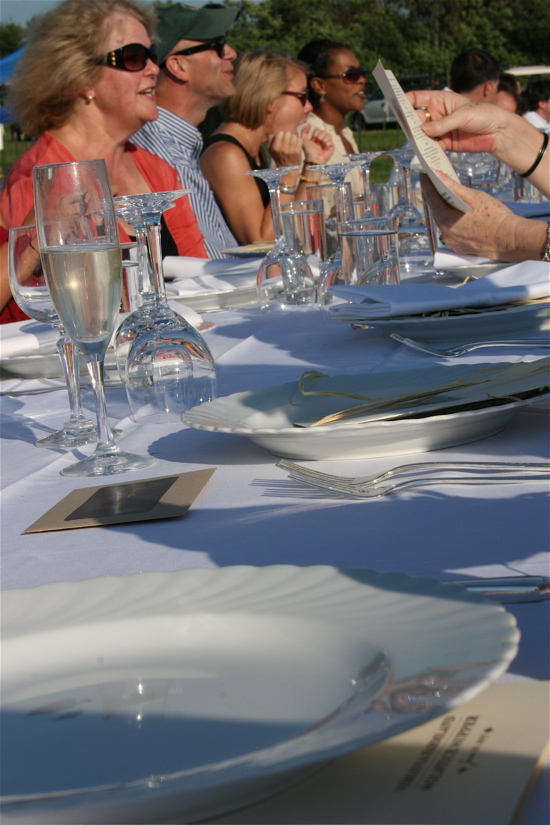 To offset the flow of wine, platters of appetizers were circulated throughout the white tent erected for the reception.  Fresh sausage was tossed with a snap pea slaw while the sweetness of beets was paired with an Alberene ash goat cheese.  The start of Summer squash season was heralded with grilled Summer squash coupled with a Virginia feta.  And fresh eggs were highlighted in a frittata of potatoes, leeks and Virginia ham.  All of the produce was harvested the day before – evident by the sweetness of the beets and the tangy earthiness of the squash.  A live blue grass band rounded out the trifecta of good wine, good food and good music, making for a lovely start to the warm Summer night.

A makeshift kitchen was set up close by, with Tony and his staff working feverishly over the open flames of the grill. The first course was set before us, a chicory salad with deviled eggs and a Summer squash and cornbread panzanella.  The eggs were gathered that very morning from the chicken coops, bringing new meaning to farm fresh eggs.  The yolk was smooth and creamy, requiring little seasonings to bring out its rich flavor.

Knowing this, Tony and his staff used a minimal amount of ingredients to create the deviled egg, allowing its natural flavors to shine.  The salad course was paired with Horton’s Viognier 2008, a crisp wine that didn’t interfere with the taste of the food. The greens were tossed lightly with a vinaigrette of freshly picked herbs, providing an added depth to the salad.

The second course was quickly placed in front of us, a duo of the region’s seafood accented with fresh vegetables paired with my favorite wine of the evening, Horton’s Petit Manseng 2007.  A Virginia wrapped local scallop was paired with a Hampton jumbo lump crab cake, served on large, family style platters to encourage guests to pass the plate and start a conversation.  The crab cake was served on a bed of oak leaf lettuce, tossed with the same fresh herb vinaigrette used on the chicory salad. Rounding off the second course was a crudo of spring root vegetables, including fresh radishes and beets.  The gorgeous, deep red of the beets permeated the rest of the crudo, giving the dish a bejeweled quality.

During the break between the second and third courses, I was able to get a closer look at the kitchen created in the middle of the farm land.  Tony, an easy going and affable guy, chatted freely with guests as he maneuvered the Piedmontese beef, rabbit and bison skirt steak around the huge, open flamed grills.  “The menu was driven by the harvest,” he said as he wiped his brow and turned over a massive piece of beef.  Tony’s drive to use local produce started with a simple pursuit of quality ingredients. 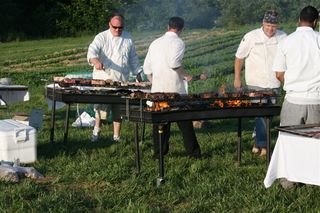 Before the third course was presented, a Cabernet Franc 2006 appeared in my glass.  Although I’m not a fan of reds, I could appreciate the clear, full bodied taste of the Cabernet and believed it to be a fitting accompaniment to the New Frontier Farm Mixed Grill.  The grill included the aforementioned Piedmontese beef, a rabbit terrine and a bison skirt steak.  Seasoned only to bring out the meat’s natural flavors, the cuts were succulent and delicious.  The skirt steak was unbelievably velvety, almost melting in my mouth.  As with the second course, the mixed grill was served on heaping platters.  By this time in the dinner, everyone was relaxed and old friends, so the plates were passed around as if it was a family dinner. 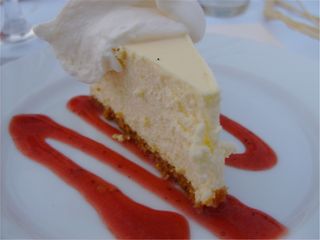 As dessert was served, everyone tucked into the Caromont Farm Chevre Cheesecake placed before them.  A strawberry black pepper preserves and Chantilly cream sauce accented the cheesecake, a mellower version of the heavier, traditional ricotta and cream cheese cheesecakes.  A sweet but flavorful Late Harvest Viognier was paired with the cheesecake – and a favorite of several of my dinner companions.  The knowledgeable servers explained how harvesting the grapes later allow for a sweeter, almost port like white wine.  Although heavier than all the other wines served throughout the meal, the Late Harvest Viognier was still a crowd pleaser.

A final treat of Virginia peanut cookies was served along with iced espresso before Tony came out to greet all the diners.  A rousing round of applause greeted him, along with flashes of cameras and shouts of praise.  He graciously accepted the compliments and chatted with every section of the table before heading back to clean up.  As we all headed back up to the orchard to our cars, full and happy, the sun gave way to night.  Fireflies seemed to be lighting the path back to the orchard, reminding me that I was a long way from the city.  This was a unique event, allowing the consumer and the producer to come together over the very food that binds them.  A celebration of the season and the hard workers who bring it to us every week, the supper was a huge success.  And I walked away richer in the knowledge that I truly know where my food is coming from.