About 120 years ago, on a sweltering DC summer's day, a lobbyist named Colonel Joe Rickey walked into Shoomaker's, a popular local watering hole. Being parched and overheated (pre-AC, our fair city was the pit-stain capitol of the east coast), Rickey asked his friend, bartender George Williamson, to whip up something cool and refreshing. The two, collaborating over several auspicious minutes, combined the juice of half a lime, soda water, and sweet, sweet Bourbon, into what would become the era's greatest cocktail sensation, the Rickey. Not only is this the first good thing to ever come from a lobbyist, it is also a point of pride for DC bartenders and bartendresses. To honor the cocktail and its local beginnings, the DC Craft Bartenders Guild started Rickey Month, a 31 day celebration of all things boozy and refreshing.

After the enourmous success of last year's inaugural festivities, the Guild has made it an annual, with even more local bars participating. All month, DC's best mixologists have been slaving over their... umm, mixology labs, concocting innovative homages to the popular beverage in both the Gin and Bourbon varieties. On August 3rd, a collection of local cocktail luminaries will gather at Bourbon in Adams Morgan, and a winner will be announced.

The great part about Rickey Month is that you, too, can be a part of it! A special People's Choice prize will also be awarded to the drinksman who garners the most votes here. This year there are 15 entries in the competition, whom I have enumerated below:

As of today, I am sorry to say I have only had a chance to try one of this year's entries: Gina's Knee High by the 4th of July at PS7s. Based on Woodford Reserve, this cocktail incorporates the traditional lime and soda, along with house made corn water (yes, you heard me), and a secret blend of herbs and spices. As advertised, the cocktail was indeed refreshing, with the whiskey taking a back seat to the sweet corn, and green, herbaceous characteristics. Very nice, and indeed, appropriate to the spirit of the event.

Hopefully, I will get to try a few more before the judging, and will update this post accordingly, so stay tuned. If you out there have tried any of the contestants' beverages and have something to say, please do chime in in the comments section. Oh, and if you are free the evening of Monday, August 3rd from 6:30 to 10:30, go by Bourbon for the main event -- the $10 entrance fee buys you a classic Gin or Bourbon Rickey, and cash bars planted around the restaurant will let you sample all the nouveau interpretations. I will be there, and in the interest of fairness, will make a point of trying each and every one. If you see me on my back in the bathroom, please do flip me on my side, lest I pull a Hendrix... 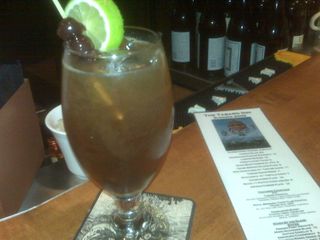 Managed to sneak by Tabard Inn yesterday to sample Chantal Tseng's "Gunslinger Rickey." The Gunslinger is made with Woodford Reserve, San Pellegrino Chinotto Soda, lime, and smoked Mezcal cherries. This one definitely shows its Bourbon base, couching it in the delightful, slightly sweet/spicy character of Chinotto. The coolest part of this drink -- and I assume the origin of the name -- is the three Mezcal soaked, kitchen smoked cherries that serve as a garnish. Even while sipping the cocktail, the cherries exert a strong, flinty aroma, reminiscent of smoked meat and spent firecrackers; don't leave them in the glass when you are done, as they are also delicious.

Interesting! I had no idea about DC's role in the history of cocktails.