D.C. Beer Bars: Birreria Paradiso - The first and the best 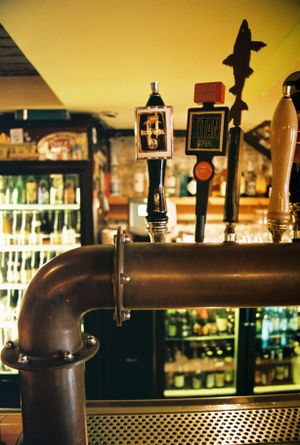 Here in the D.C. area, we are blessed with an abundance of bars. Well, maybe not blessed, but we sure do have a lot of them.

In the sense of four walls and booze, all bars are basically the same. But there's more to a watering hole than elixir and shelter, much more.

In this new series, we're looking at a very special category of bars - beer bars - and telling you of the very best in our area. Stealing the rating system Top Gear magazine uses to rate vehicles (it really is a great magazine), I'll be rating beer bars on a 20 point scale. I'll consider the beer, particularly the tap selection, the bar's atmosphere, bartenders and other elements, such as the presence of a beer engine, all of which make up a great beer bar.

I'm getting ahead of myself. If you think about it, you know what a beer bar is, sort of. I came across the term on the Beer Mapping Project's fantastic Web site. Beer geeks from around the world plug their favorite beer bars into the site's maps so that other beer geeks can track them down. Whenever I travel, I consult the Web site to find the breweries, beer stores and beer bars in the cities I'm visiting. It's a fantastic resource that if you're not using, you should.

Anyway, a beer bar is obviously a bar that serves beer. But a beer bar is an establishment that specializes in beer, that pays particular attention to the beer it serves. It may do other things, such as the beer bar in our inaugural profile, but there is a distinct emphasis on beer.

If you agree with my selections and ratings, great. If you don't, let me know. And if you know of a beer bar I should check out, let me know that, too.

I've visited the Birreria quite a few times, and on several occasions I've been surprised by what was on draft and what was hidden away. During last year's election, I came across Avery's limited release Ale To The Chief on draft in the first floor bar, complete with a hand-painted Obama tap head. There was the evening my wife and I were chatting with bar manager Greg Jasgur about how hard it is to find North Carolina beers in the D.C. area. He spun around and produced a bottle of Gaelic Ale from Asheville's Highland Brewery.

Local beer geeks will know the story of Greg flying to Chicago only to drive back with a moving truck full of Three Floyds. And during a recent visit, Greg (pictured) had Three Floyds' Robert the Bruce Scottish Ale on the beer engine (a magical machine, if ever there was one).

Between the regular rotation of drafts and the 200 or so bottles, 25 percent of which are rotated regularly, Greg runs a quality beer bar. Does it hurt that he doesn't stock any beers from the big three American imports (Anheuser-Busch, Coors and Miller)? No, it doesn't hurt at all. Sorry Bud lovers, but anyone willing to eschew the bounty and revenue that comes with keeping the big three on hand is taking a chance to do something right.

And while owner Ruth Gresser gives Greg the reigns on stocking beers, Greg is willing to turn some of the decision making over to his customers. Got an idea for a beer that the Birreria doesn't offer? Let Greg know, he might just have it the next time you come in.

So, will the best beer bar in D.C. score a perfect 20? I'm afraid not. As much as I like the Birreria, it is a pizzeria first and a bar second. You could argue that that means there is always great food available to go with your Double Dead Guy. That's true, but that also means that you're sharing the bar with the Johnson family who brought the kids for pizza. As wonderful as I'm sure the Johnsons are, they take me out of the moment. When I'm in a bar, I want to be in a bar, not a family restaurant.

Despite the fact that Pizzeria Paradiso caters to diners and beer lovers equally, I have come across the occasional server and bartender who didn't know much about the beer. Fortunately, the beer menu does a decent job describing the styles and characteristics of the beers, but to be great, all the bartenders should be well versed in the beers on draft and familiar with the bottles on hand. The servers should at least be familiar with what's available.

Finally, and this is a minor quibble, but there could be a better focus on local beers. One of the things I appreciate about the bars in the Triangle area of North Carolina is the fact that it's not uncommon to find local beers on tap, often two or three. Locals drink local beer, so local bars kept them on draft. I understand that D.C. is a city of transients, but that's no reason a few of the quality beer bars, like the Birreria, can't dedicate a few draft lines to the likes of Hook & Ladder and Flying Dog.

Still, Birreria Paradiso is a damn fine beer bar. If you haven't wandered downstairs to pay Greg a visit, you're missing out. He's running a fine establishment with consistently the best selection of quality craft beers and imports you're going to find in the area.