My First Koshu; or, Rob has a Thing for Asians.

Okay, so is it cliche for a skinny white dude to have a thing for Asians? I try not to be tacky or predictable, but apparently I can't stay away. A few weeks ago, I went on about this exotic Chinese find, that I admit was a bit of a disappointment. But did that deter me? Of course not! This week, amidst my usual degenerate trolling for whatever is tasty and cheap, I wandered into one of my usual haunts on Wisconsin Ave. Expecting to pick up my usual fare of lithe Italian, or maybe a quick French pink, my eye lights upon, of all things, a Japanese Koshu! Though a little bit older than I usually care for, the chance at a Japanese wine (what did you think I was talking about?) was one I couldn't miss. 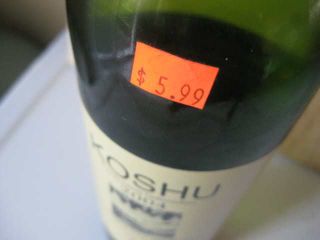 You don't see these ones stateside very often, folks; I've been looking for years. But believe it or not, Japan actually has a sizable wine trade, consisting of over 175 wineries, operating in almost 90% of the country's prefectures. Though small compared to many western wine industries, Japan meets more than a third of her wine demand domestically. As such, very little is exported, so I was shocked to see this one at Wide World of Wines, relegated to a bargain bin at $5.99, one quarter its original price. Upon asking the owner, I learned that this was a direct import ('DI' in the biz), so you won't find it anywhere else. When I asked, very bluntly, if it was still potable (it is a 2004, and five years is a bit long in the tooth for even your finer white wines), I was informed that it "...should be." Though not a ringing endorsement, this seemed good enough for a $6 gamble. 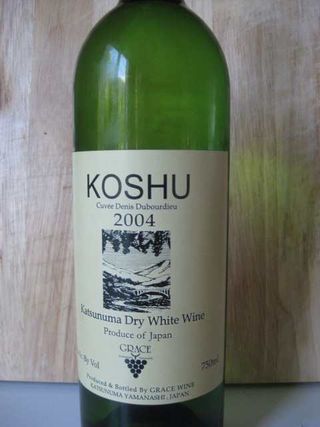 This particular bottle was made by Grace Winery, which the back label informs me was founded in 1923 in the region of Katsunuma, near Mount Fuji. Katsunuma is Japan's most important wine region -- according to legend, the grape vine was first planted here by a follower of the Buddha Nyorai in the Eighth Century, and the area still and industry leader. The golden boy of Japanese viticulture is the Koshu grape, a vitis vinifera (i.e., European varietal) brought over and gone native some 1,200 years ago. I don't know much about Koshu, or Japanese wine in general, so I checked out Grace's English language website. "With the belief that the aroma of climate is a reflection of the human work to nature," I was assured, "we want to be one for Japanese winemaker to occupy certain place among well-known world bland." Fair enough!

The Grace Koshu pours an almost colorless lemon yellow, telegraphing its generally light character. The nose is amazingly youthful given the wine's age, offering up subtle notes of white flowers, citrus, and a vaguely milky note. On the palate the wine is very light, but has a forceful lemon-accented palate, and a short, dry finish. Typical of cold climate, lighter whites, this wine would pair well with lighter salads or white fish, or make an excellent quaff for someone who likes his wines dry and lemony.

Though obviously not mainstream in either flavor or origin, this wine was quite pleasant, and a good bet for any Japanophile or wine lover looking to surprise his friends. Wide World of Wines only seemed to have a few bottles left, so if you count yourself in either of these camps, go soon!

Interesting. Other than sake, I don't think I've tried an Asian wine: time to change that.