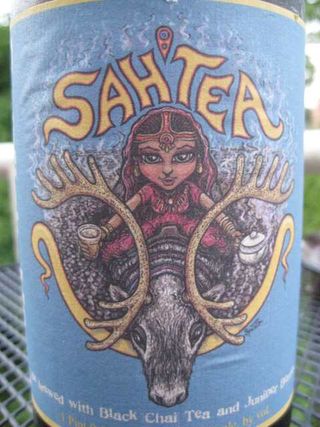 The Finnish have some crazy stuff in their culinary cache. Like, have you ever heard of Viili? It is a type of native yogurt made in the traditional fashion, which forms a fungal layer on the surface, and is purported to have a ropy texture and goopy consistency (check out a demonstration here). Traditional Finnish candies include Salmiakki, which is flavored with ammonium chloride, and Terva Leijona, a wood-tar based taste treat. Pettuleipa, a traditional Finnish bread consumed in rough times, is made with rye flour and pine phloem, making it a precursor to contemporary "light" breads (yeah, those gots sawdust in 'em).

Maybe its the climate, or the weeks and weeks of perpetual dark and light, or the incredibly light population density; whatever the cause, those nutty Fins sure eat some weird crap! Traditional Finnish beverages are also odd — though I like the idea of the Long Drink, which for all intents and purposes is just Fresca and Gin! One such beverage is Sahti, a 600 year old style of beer, very uncommon outside its native land. The beer is typically made with a rye mash, which is heated by the addition of white-hot stones, which cause caramelized sugar to form, lending the brew its distinctive flavor. The mash is then fermented with bread yeast, and flavored with juniper and other spices. The result is a rather strong, dark beer, with, as you might expect, quite a potent bouquet.

Always keen to try their hand at a new beer, the folks at Dogfish Head have just released the Sah'tea (about $12.99 / 750 ml), a beer made in traditional Sahti style. Like its Finnish forebears, the Sah'tea's mash is heated with rocks and flavored with juniper. Rest assured, Dogfish did not grab the Fleischmann's, but instead fermented it with a German weizen yeast, then gussied it up with some chai tea for flavor (get it now? Sah'TEA! Har!).

Flavor: Lots of banana on the front, along with more cinnamon and cloves. Almost salty on the attack, and then mildly sweet and citrusy on the midpalate. Finish is lengthy and spicy, mostly tasting of cinnamon, with the banana (now rotting) continuing on for several seconds.

Having never had another Sahti, I can't really say how Dogfish's stands up — that said, it certainly is memorable. In a lot of ways, I think their choice of a German yeast really dominates the beer, and wonder what it would have been like if they had gone super-traditional, using the kitchen stuff. While the flavors are not my cup of tea (har again!), and I think it could have stood some hopping, this beer fits nicely in the esoteric Dogfish portfolio. If you are a fan of winter brews, but yearn for one that is light enough for the summer, pick this one up at Schneiders, Whole Foods, or at any number of other local vendors.

Did you know that there is a gene for liking cinnamon? Well, if you don't have it, you won't like Sah'tea.

Has anyone tried the new Dogfish Head brewpub in Falls Church? (I was just in Rehoboth - really great service there.)

Ingrid, Dogfish Head's Falls Church Alehouse has been open a few years now, but it's a great spot to try several DFH beers on draft and in the bottle. Also, the food and service have been good everytime I've gone in. If you go, try the 75 Minute IPA - a blend of the 60 Minute and 90 Minute. It's a great draft.