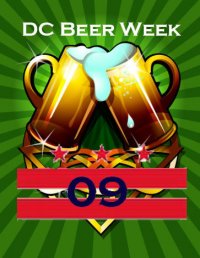 So do you know why Congress gets a recess in the Summer? Well, clearly, because they WANT one; though it can't get it's act together on things like, I dunno, health care, congress has never had a problem reaching consensus on issues that effect it's members' own well-being. But indeed, back in the day, it was hotter than a June bride in a feather bed in this town, without the respite of blessed climate control -- one can't blame them for getting the hell out of Dodge. So now, while the House and Senate carry on the fine traditions of their predecessors, the rest of us without the excuse of "public service" are left here to ponder our own ass sweat. Yay Democracy!

But of course, we find a way to carry on in the worst of circumstances. The kids, they have their pools and their Slip n' Slides and their X-Boxes, so they'll be fine. As for us adults? Well, in the fine tradition of making questionable decisions with the faintest of pretenses, we drink! Well, damn, it's hot out there, and hydrating with water is no fun; now give me back my Foam-Dome!

A couple weeks ago, you may remember my post about Rickey Month, a celebration of DC's Summer drinkin' heritage. Hot on its heals, DC's beer community has announced DC Beer Week 2009 for August 16th - 21st.

Having realized that the craftbrew sensation had finally hit the DC area, last year several area restaurants and bars held special events in celebration of American Craft Beer Week in mid-May. Apparently this sparked a certain amount of interest, as a good number of the folks involved banded together to found DC Beer Week 2009, an independently organized celebration of beer and culture. Twelve breweries and more than two dozen beer bars will be participating in a series of events emphasizing the diversity, potential, and fun of beer.

Festivities kick off with a day-long concert at the Rock and Roll Hotel in the Atlas District, a hotbed of local beer activity. Come by between 2 and 8 to catch some hot local acts, representing the wide range of local styles, from Folk to Metal to Funk. Various craft beers will be available for purchase throughout the afternoon; show up early, and for $20 (first come, first serve) get a VIP ticket that gets you 10 samples of rare, limited edition craft beers.

The group's website is a little light on info at the moment, but the group's Facebook page has a full event list. For those of you don't dig the social networking, I have taken the liberty of transcribing the schedule below:

The Pug has gained a reputation as a place “where the locals go”. Always playing great tunes on their sound system, free cheese puffs, fooseball, and an extensive selection of craft beers in cans- The Pug is sure to be a good time. Proprietor Tony T. and crew open their arms to the good beer-drinking loyalists of Washington, DC.

Come to one of DC finest restaurants to sample a selection of great beers from Delaware’s world-renowned Dogfish Head Craft Brewery. Dogfish Head brand rep Devin Arloski will be on hand with glassware and other goodies.
http://www.beckdc.com

Long recognized as one of the world’s greatest brewers, Chimay Trappist Ales are full of complex flavors. Come out to historic Georgetown and try the rare Chimay Triple draught and vintage Chimay Grande Reserve paired with the rich Chimay cheese. There will also be an extremely rare surprise treat from our friends at Chimay.
http://www.eatyourpizza.com

Come chill and relax at the Reef and experience a taste of Oregon. Fresh, Yequina Bay Oysters from Newport, OR will be flown-in for this special event. The Reef’s Chef Connor will be preparing other delicious dishes paired with the complex, tasty beers from Newport’s Rogue Ales.
http://www.thereefdc.com

Come join in on the fun and experience the ultimate pairing to great cheese- craft beer. The folks from NY’s Brooklyn Brewery will be teaming up with one of city’s finest fromaggiers- Cowgirl Creamery to present a vast array of flavorful beers and individualistic cheeses.
http://www.saint-ex.com

Come experience a true Southern tradition- a crawfish boil. Abita Brewing Co. is the south’s most established craft brewery and a drink synonymous with the city of New Orleans. Chef Matthew Anderson of the Argonaut is known for his coastal cuisine and will be unleashing this customary communal dining experience for lucky attendees.
http://www.argonaut.typepad.com

Join the folks at Restaurant Marvin as Beer Director Chris Surrusco will assemble an opportunity to “Hit for the Cycle” of Belgian and Belgian-Style beers. Taste “Single”, “Double”, “Triple” and “Quadrupel” beers paired with delicious cuisine from Marvin’s Chef James Claudio. Attendees will have an opportunity to win two tickets to the Friday, Aug 21 Nationals vs. Brewer game.
http://www.marvindc.com

Mr. Belgium comes to Washington and he brought with him some potent, complex beers from the Mecca of brewing culture- Belgium. Come and join in on the action at one of Capitol Hill’s legendary taverns.
http://www.capitolloungedc.com

There’s always a freak show going on at the Palace of Wonders. Join founders Jeremy and Matt from Shmaltz Brewing Co. as they present there delicious beers- Coney Island Lagers and Hebrew Ales. Rumored is a surprise performance by an authentic Coney Island Freak Show legend.
http://www.palaceofwonders.com

The best way to appreciate something is to see how it’s made, come out to the District Chophouse and meet one of DC’s best brewers- Barrett Lauer. Brewery tours will be conducted and to celebrate DC Beer Week all of the Chophouse’s brews will be half-price from 3-7 pm.
http://www.chophouse.com

Come join Pete from Troegs Brewing Co of Harrisburg, PA and taste their award-winning beers. Authentic Troegs pint glasses will be given away throughout the duration of the evening.
http://www.redandblackbar.com

Come kick-off the end of DC Beer week with America’s National pastime- Baseball. DC Beer Week attendees will receive discounted tickets in selected areas of the ballpark. Suitably the Washington Nationals will be taking on the Milwaukee Brewers..
Mezzanine seats for only $23 (regularly $30) and LF/RF Reserved for only $16 (regularly $24).
Call Mike Benko at 202-640-7648 and mention “Beer Week” to purchase your discounted Nationals tickets!
http://www.nationals.com

I can't wait to eat fist fulls of mud bugs and slug down a few Turbodogs at the Argonaut.

And for anyone interested, CulinAerie is hosting a couple beer dinners in September, beginning with Starr Hill Brewery on Sept. 3. Additional info is available on the cooking school's Web site (www.culinaerie.com).