The Galaxy Hut: Great bar is refuge for locals, smokers and beer enthusiasts 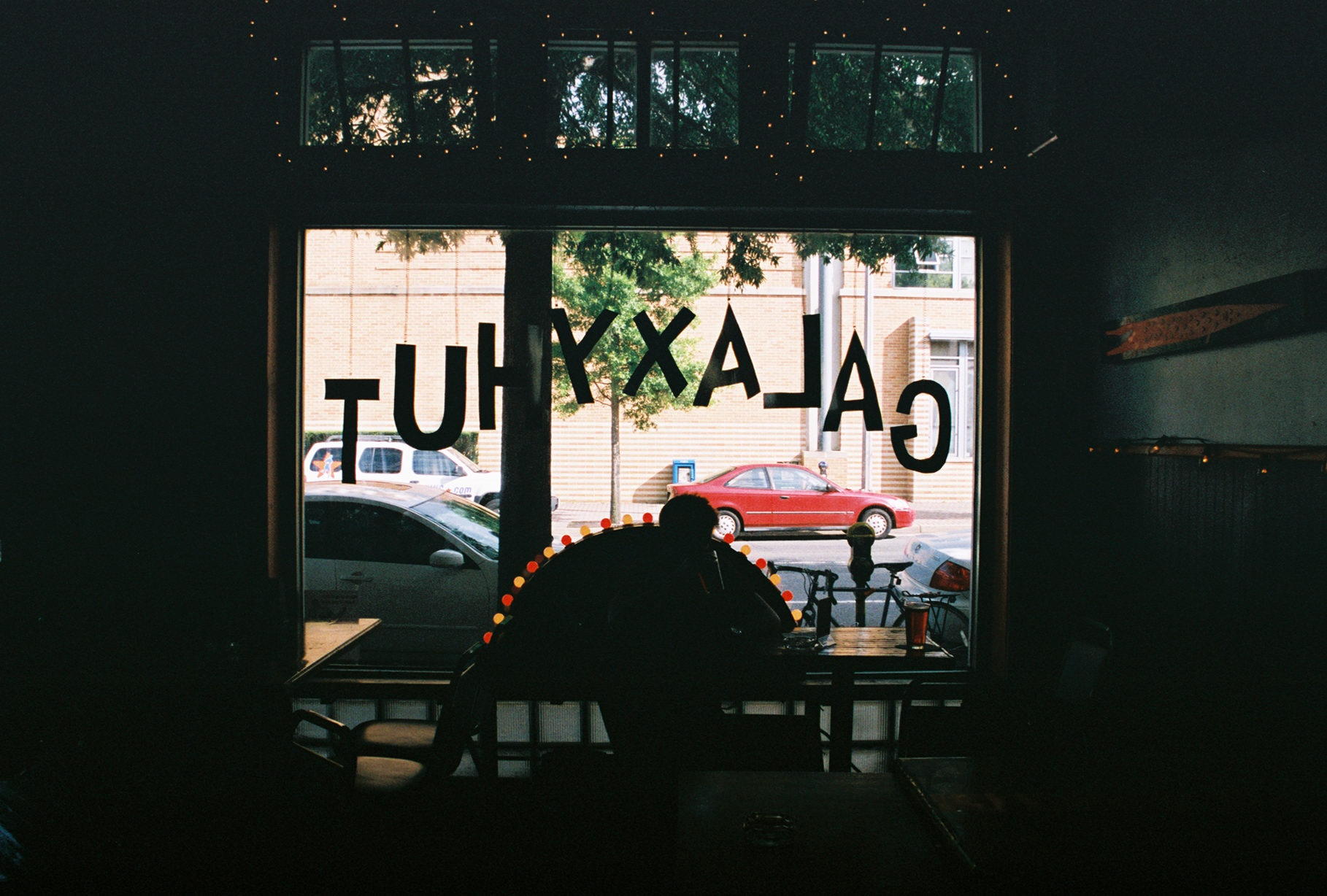 By now, everyone, I mean everyone, has seen or heard about Arlington: The Rap. The send up of Clarendon, Courthouse and Rosslyn is absolutely brilliant because it is absolutely spot on.

No, there are a few hold outs. A few places that don't answer to a corporate master.

There's still the Hut. And as long as there's the Hut, everything will be alright.

The Galaxy Hut, a sister bar to the old Dr. Dremo's, was one of the first bars I discovered when I moved up to the D.C. area in the late 1990s. It was tiny, dark, and filled with smoke and locals. A few nights a week, you could sit two feet from a band - or just some dude - beating the shit out of a couple instruments until your eyes teared and ears bled. Today, with a gelato shop next door and a Whole Foods across the street, the Hut remains a tiny, dark joint full of nicotine and locals. The ear bleeding has been scaled back to a couple days a week.

God, I love that place.

The Hut has everything a beer geek could want in a great beer bar: a great selection of quality beers on draft (20), several bottles and cans (including Duck Rabbit and 21st Amendment during my last visit), a solid juke box and a cave-like environment where you can disappear for a few hours or days.

Technically speaking, The Galaxy Hut is a restaurant. It pulls in more than 51 percent of its revenue from the food coming out of the open kitchen behind the bar. Long-time bartender Bill Arthur told me the Hut easily clears that much in food sales a month.

Fine, the Hut's a restaurant. The Hut is a dark, smoky, fairly average restaurant that you shouldn't take your mother or your kids to, because it's filled with a bunch of beer drinkers and nicotine addicts.

But it's one hell of a beer bar. 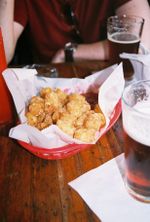 I haven't lived near the Hut in 10 years, but I need little reason to hop the Metro to the Clarendon bar for a few beers. Of all the places to get a drink in the D.C. area, the Hut is one of the very few real bars. There's no TV, no scene, no rules about standing or sitting or ordering, and there's no password, dress code (looking at you PX) or secret signal necessary to get in. There's just a lot of quality beer and some of the best damn tater tots this side of middle school.

I know I just made a point of saying that the Hut's only a restaurant in a technical sense. Well, the kitchen does produce some kick ass tots. Hot, crunchy and salty, these cylindrical treats kick the shit out of beer nuts, and should be heralded as beer's best friend.

Speaking of the beer, owner Lary Hoffman keeps the Hut stocked with a solid selection of American craft and imports, particularly Belgian ales. Lary bought the place in 2005 and is responsible for the Hut transitioning from a great local bar into a great local beer bar. He also made sure to keep Ben Claassen's art on the walls, which is as much a part of the place as the arcade games and band flyers.

The taps are rotated weekly, with a few beers moving out as a few move in, including the occasional local beer. Although Lary's a fan of IPAs and Belgian beers (who's not these days?), he keeps the selection balanced by ensuring other beer styles are always on draft. Unlike many beer bars in the area, all of the Hut's drafts are available by the pint and by the pitcher.

That means 64 ounces of stinky, freaky, hoppy Green Flash IPA. And that, my friends, is a lot of hoppy beer.

As for the bottle selection, Lary admits to keeping a couple "wretched" beers like Miller Lite and PBR on hand for the "I've never heard of any of these beers" crowd. Bill, who's put in 8 years behind the bar, says the people ordering Miller Lite are few and far between, but they do show up.

When he's not explaining the beer lineup to the latest brown flip-flop to shuffle through the door, Bill's greeting regulars, taking orders, pouring beers, running food and busing tables. He's the Hut's everyman, and he does it all with a smile and a smoke. Bill Arthur is a very good bartender.

And let me say this about the Hut allowing smoking: I like it, and I don't smoke. Of course, I should knock the Hut for allowing smoking. Lord knows my wife and friends do. But I like the cigarette smoke, like I like the crappy bathrooms, beaten up bar stools and cardboard letters dangling in the front window. The ashtrays and butts are a few of the many things that make The Galaxy Hut restaurant a better bar than Harry's Tap Room.

Bars - the good ones, anyway - should be a little repellent. They should keep the riff raff in and the Cub Scouts out. When I wake up in the morning and stink like Winstons, I know I was out having a good time.

However, all this is moot. Come Dec. 1, the Commonwealth of Virginia will require the Hut to ban indoor smoking for good. The smokers inside will replace the nonsmokers on the patio. Lary says the cigarette smoke is the only thing people complain about at the Hut, but because business is good, he doesn't worry about it. Still, when the ban takes effect, he expects business to get even better.

Smoking policy aside, there are weightier issues to grouse about. For one, the size of the beer selection. I realize the Hut is a small joint, but surely a bit more room could be made for an extra cooler and a few more beers. If Lary chooses to keep a few Millers on hand, that takes space away from the Troegs, Victory and Great Divide beers (not to mention the local stuff) he could be stocking.

Although I appreciate that the local guys make an appearance in the Hut from time to time, the bar is the perfect place to specialize in local beer. I'm not suggesting Lary turn over half his draft lines to Flying Dog and Starr Hill, but a steady rotation on tap and few locally made beers in the ice box would be ideal for his neighborhood beer bar.

And then there's the Web site. If you're going to have a Web site, you should keep it up to date. I need to know when the bar is open, what the phone number is, what the address is and what's on tap. The Hut's site has the correct phone number and address, but the hours are wrong (unless I follow the "menu" tab to the bar's myspace page), and there's no information on the beer line up.

These are but minor quibbles. The Galaxy Hut is one of the best beer bars in the D.C. area. And thanks to Lary and Bill, it will remain one of Arlington's few refuges from the rising tide of gentrification.

love galaxy. been living in clarendon for 4 years and started going to the hut for the past couple now. keep watch for the chalkboard at the bar for new beers on tap!

The Hut is one of my favorite places, ever. Note that a recent addition to the patio is the silo from Dr. Dremo's; also, a correction: there is a TV above the bar, but it's usually muted and tuned to TCM.

Man, I effing love the Hut. We're moving out of the area in 3 weeks, and the Hut is probably the #1 thing we'll miss. God bless Lary, Bill, and the Hut's fryer.

It's hard to love smoke when you're a non smoker--or an ex-smoker, in my case. No offense intended toward anyone, but I just couldn't take it.

I hear you, Tim. Given the choice between smoking and non, I prefer no smoking. The point I was making was more philosophical. Elementary schools, churches and hospital wards where smoking bans make perfect sense. Bars are dens of vice, so prohibiting drinkers from smoking doesn't make complete sense. What's the message: screw the liver, save the lungs? If adults want to go out for a few beers and a smoke, I think they should be allowed to. More importantly, businesses - particularly bars - should be allowed to cater to that crowd. Afterall, there's nothing illegal about smoking and drinking.

I've loved the Galaxy Hut since its first incarnation as Roratonga Rodeo in 1990. Back then, the only thing going on after the funeral home closed was this joint. Its only gotten better since Lary acquired it. To be honest, we only stop in a couple of times a year due to the smoking. That will change in December, just in time for our annual Christmas night visit.