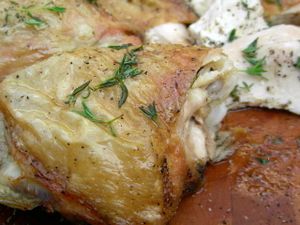 I mean, I should have a chicken recipe, right?

In the year or so I've written this grilling column, I covered blood sausage, octopus, pork butt, eggs, oysters, fish, shell fish, French toast, and giant brats. Surely somewhere amongst all that I did a chicken post.

A while back, my buddy Jason was in town to do a book signing at the American History Museum (Jason's a Lincoln historian, which is interesting until you're two hours into a yarn about Mary Lincoln's shopping habits. That's about the time I wish Booth would sneak up on me.). Jason spends much more of his time thumbing through old records than in front of a grill. So he asked me if I had a recipe for grilling chicken.

Of course I do. I'm the grilling guy and chicken is one of the most common meats Americans cook, indoors and out. Then I checked the Website. In the past 12 months, I've covered chicken twice. Twice! And neither post had anything to do with grilling.

So, time to address chicken.

During Jason's visit, I also learned that he'd never tried thyme. Thyme, people. It's one of the most common spices in our collective cupboard. It's not like the guy hadn't tried grains of paradise. Jason hadn't tasted an herb only slightly less popular than oregano. (To be fair, I introduced Jason to shrimp six years ago. Afterward, he was convinced he could feel them in his stomach. But still.)

This put me on a mission. I needed to come up with a recipe for grilled chicken and thyme. And as good as dried thyme is, I would use the fresh stuff growing in my backyard. The problem is, depending on weight, a standard chicken takes about 45 minutes to an hour on the grill. By then, the fresh thyme would be charred and denuded of any flavor. Instead, I decided to use an old barbecue technique. More on that in a minute.

Let's talk chicken. Not long ago, I started shopping at the H St. farmer's market. It's small, but the lineup of purveyors is solid. Among the vendors who show up every Saturday is a Mennonite farmer and his sons. The guy brings all kinds of beautiful cuts of meat, including free-range chicken.

Admission: Until that day, I had not cooked a free-range chicken. I'm all about the free-range movement, but I'm lazy and was happy with the birds I bought at Eastern Market and the grocery store. Then I read Hugh Fearnly-Whittingstall's excellent book on butchery and sustainable farming, The River Cottage Meat Book. The guy lays out all the moral and culinary reasons we should eat free-range raised animals and support the farmers and butchers who provide the products to us.

So I bought a $16 free-range chicken and tossed it on the grill for an hour ... and served if half cooked to my buddy Columbo and his wife (Columbo, by the way, has never let me forget the first time I attempted beer-can chicken many years ago. The outcome was much, much worse.)

Turns out, thanks to all that walking around, free-range chickens have denser meat than the cage-raised birds we're accustomed to buying and eating. Consequently, free-range birds need to cook a lot longer.
All this is a long-winded way of setting up my latest recipe: grilled free-range chicken with thyme.

As I said, an hour on the grill will destroy fresh thyme. So instead of adding the herb before I cooked the bird, I incorporated it afterward - by seasoning my cutting board.

It's common when doing barbecue to season your cutting board with salt, pepper, butter and whatever other seasoning you're using before carving the meat. That way the juices mingle with the seasonings, and the seasoning adhere to the interior of the meat.

The same principle applies here. I simply covered my chicken with canola oil, salt and pepper, and threw it on the grill for an hour and 40 minutes. After I pulled it off and let it rest, I drizzled quality olive oil onto my cutting board and shook some salt and pepper over top. Then I covered it all with about a handful of thyme.

When it came time to carve the chicken, I set the bird on the board and slid my knife through the crispy skin exterior to the pool of seasonings beneath the bird. The result was a perfectly grilled chicken coated in olive oil and thyme. Just for good measure, I squeezed a lemon over top and scattered a little more thyme.

The chicken was delicious and the thyme works great with it. However, for all the moral virtues of raising chicken in a free-range environment, the flavor didn't translate. And when you're spending twice as much and cooking it nearly twice as long, you expect more than a clear conscience at the end of the meal. Unfortunately, my free-range chicken tasted like every store-bought bird I've cooked on the grill.

There you have it, a chicken recipe. It may have taken a Lincoln historian, a Mennonite, a Polk County blogger, and a James Beard Award winning book, but I finally produced a grilling recipe for one of the most common foods we eat.

To go with my ubiquitous meat, I picked up a ubiquitous beer: pilsner. Hands down, pilsner is the most popular beer style in the world, thanks in large part to the Belgian pilsner brewed in St. Louis, Mo. But don't let that "American pilsner" fool you, pilsner tastes good. You just have to keep the rice and corn out of the malt. Well, Monteith's brews the best pilsner I've had in a long time. The New Zealand brewery's golden pilsner is rich and slightly crisp, perfect for these sweaty D.C. days. It also pairs well with the subtle flavors of a dish like grilled chicken and thyme. As much as I love IPAs, the hoppy flavors would overwhelm the thyme. Now, because pilsner is the world-wide favorite, there are plenty to choose from, just steer clear of the Belgian stuff.

1 4 lb. free-range chicken (if you don't use a free-range bird, reduce the cooking time down to about an hour)
1/4 cup of fresh thyme
1 lemon (optional)
Canola oil
A good quality olive oil
Salt and pepper to taste

To get started, pull the chicken out of the refrigerator so it can loose some of its chill, and start your grill. For this recipe, you will be doing all indirect grilling. That means if you're using a charcoal grill, set up your fire to one side of the grill and plan to grill the chicken on the other side. If you're using a gas grill, light all your burners, but be ready to shut the middle ones down when you put the bird on (this way, the middle grates will be nice and hot when the chicken goes on.)

Butterfly the chicken by removing the backbone (you can have your butcher do this for you), thoroughly coat the skin with canola oil, and season generously with salt and pepper.

Entertain yourself for an hour and 40 minutes.

When you open the lid, the skin should be golden brown and crispy. Remove the chicken from the grill and allow to rest for 15 minutes. In the meantime, coat your cutting board with olive oil, and season with salt, pepper and most of the thyme. Transfer the bird to the board and cut it up. If you want, squeeze a lemon over top (few things are better than hot chicken and fresh lemon juice).

Before serving, drizzle a little more olive oil on top and scatter the remaining thyme. You can either serve the chicken rustic style straight from the cutting board or transfer it to a platter. Whatever you do, make sure you drag the meat through that oil and seasoning. Doing so may make the extra money and time seem worth it.

I am sorry to hear that your grilling of a free-range chicken did not stand up to expectations. Though I have not tried a whole chicken, I have grilled local free-range chicken breasts from my butcher, Let's Meat on the Avenue, and I found that his chicken meat is far tastier than whatever I buy. With just the breasts though, the potential increase in cooking time wasn't a factor. I am still very much a novice cook, so I found your comment on the increase in cooking time interesting. I guess I should try my own whole chicken and compare. Thank you for the post. It certainly got me curious.