Cigar City Brewing: Tampa's upstart brewery is quality craft out of the gate 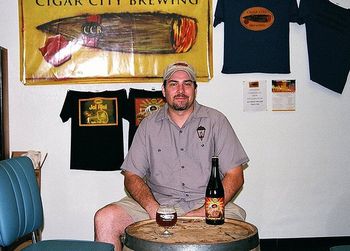 Joey Redner is a hurried man.

Since the Tampa, Fla., brewer brewed his first batch of Cigar City beer on Jan. 29, he's filled 400 barrels of beer, rolled out 11 different styles of ale (and many, many one-offs), expanded Cigar City's market from Tampa to New York and Pennsylvania, expanded Cigar City's brewing capacity, won a handful of awards -- including a gold at this year's Great American Beer Festival -- opened a tasting room, made plans to produce a collaboration beer with The Bruery, and began talking to D.C. area distributors.

On top of all that, Redner continues to homebrew, write a beer column for the St. Petersburg Times and maintains the Cigar City blog he started to chronicle the experience of starting a brewery from scratch.

Cigar City isn't Tampa's first brewery, but it is the only craft brewery in a city just waking up to the craft beer revolution. 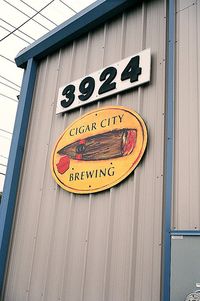 When Redner took the first steps two years ago to launch Cigar City, he did so to fill a void. Tampa is the home of Busch Gardens, and for years, the Busch beer plant (which is now owned by Yuengling). Aside from a few small regional breweries, like St. Somewhere, Dunedin Brewery and the Ybor City Brewing Company, there wasn't much in the way of craft beer. Tampa was -- and really still is -- a Bud town.

Times are changing, though. In last few years, beer enthusiasts like Redner have begun taking it upon themselves to change Tampa's beer culture. When I was going to college there in the mid 90s, the closest thing to craft beer was Hops, and the German restaurant in the mall offered two-for-ones on Icehouse. These days, Hops is still around, but it's been joined by the brewpub at Dunedin Brewery, and Mr. Dunderbak's moved out of the mall and replaced the Icehouse with one of the best lineups of German, Belgian and American craft beers in the state.

In the city that brewed Busch, you can now grab a Hercules at World of Beer, find Terrapin Rye on draft at the Oldsmar Tap House, or buy a couple bottles of Cigar City's Jai Alai IPA at Whole Foods.

These things make me happy.

The Tampa area may have some of Florida's prettiest beaches, but it's fundamentally a blue-collar town of work trucks and Cuban lunch counters. So it's fitting that Cigar City is tucked away in an industrial park behind the Home Depot.

There's not too much to look at. Within the small warehouse space is everything: a half dozen brewing tanks on the right and a make-shift tasting area and bathroom on the left. In the back are stacks and stacks of kegs waiting to be filled, and machines to fill bottles by hand. The dorm room-sized refrigerator that keeps the beer cold is not half full, but hides a barrel room that is full of potential.

Cigar City is a microbrewery.

Joey Redner is a homer.

The brewery's name pays homage to the Cuban cigar makers who founded Tampa. The beers names are a nod to the city and its tobacco roots, none more so than The Humidor Series (the GABF gold medal winner). Redner soaks cedar planks in the ale to give the beer a tobacco undernote that is oddly alluring and absolutely delicious.

That said, you shouldn't take my word for it. I'm a homer, too. I want my hometown to have a great craft brewery, so I'm inclined to want to like Redner's beer (which I do). So to find out whether Cigar City is as good as I think it is, I took a bottle of Redner's Big Sound Scotch Ale over to Greg Jasgur at Pizzaria Paradiso to find out what he thought of the beer.

Greg poured it around the bar. There wasn't a naysayer in the bunch.

For that, Redner can thank Wayne Wambles. Redner may be an avid homebrewer, but producing quality beers on a commercial scale is a considerably more difficult endeavor. That led him to Wambles, who was brewing in Winston-Salem, N.C., at the award-winning brewery Foothills (Anyone who attended the last two Savor events might have come across the brewery. You're lucky if you did. Foothills is the best brewery in North Carolina and one of the best breweries on the East Coast.) 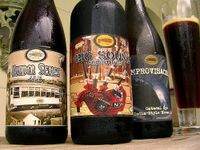 I got the chance to try five from Cigar City's line up while I was in Tampa. The Jai Alai is a solid IPA, with a beautiful hoppy nose and distinctive bite, thanks to the six different hop varietals used in the beer. The hops are kept in check by the rich, round flavor of the malt. It's a good beer. The Maduro Oatmeal Brown Ale -- a top seller along side the Jai Alai -- is a straight-forward, well-crafted brown ale. I probably would've liked the Maduro more if Redner hadn't given me a taste of a Maduro batch he tinkered with by adding Cuban espresso beans and chocolate. That beer nearly jumped out of the glass.

The Big Sound Scotch Ale is just that: big. The rich, malty, full-bodied Scotch ale is every bit its 8.5 % ABV (true story: a buddy of mine tasted the Big Sound, looked at the bottle and said, "Damn, they make some good beer."). The Imperial strength brown ale, Improvisacion, gets a surprise bite from the addition of rye in the malt. But the real surprise was The Humidor Series ale. The sour bite from the generous use of hops never got in the way of the cedar's surprising tobacco notes. The GABF judges were right about this one. 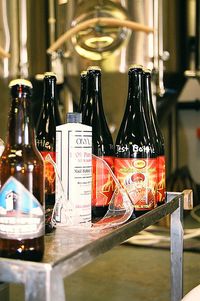 So when are we going to see these beers in the D.C. area? It's going to be a while. Although Redner has talked to a few local distributors, he and Wambles are barely keeping up with their current orders. They're adding two additional tanks, which should keep them on pace to produce a 1,000 barrels by the end of the year (Dogfish Head, by comparison, can produce 100,000 barrels a year). Within the next couple years, Joey hopes to expand the brewery further and ramp up production to about 5,000 barrels. At that point, Cigar City might be ready to ship a few beers our way.

In the meantime, if you want a Cigar City beer, you're going to need a ticket to Tampa.

Check out additional photos of the Cigar City Brewery and beer here.

I went there this summer while I was working in Tampa- it was fantastic! Joey is very nice, and spent a great deal of time chatting with my husband and I about the beers and showing us around. There are always a variety of fun and different beers, including one I remember aged on Guava. Yummy. Can't wait to go back!

blargh. Foothills is not the best brewery in NC. Visit asheville, bask in the selection. kthnx