"Germany's taste in beer is actually getting lighter, you know."

"Germany's taste in beer is actually getting lighter, you know." 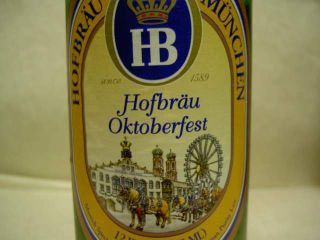 So said a friend of mine recently, by way of explaining the Hofbrau Oktoberfest. Have you had it? I reviewed this one last year, and, having re-tried it this week, I can safely say that little has changed. Though your typical Oktoberfest isn't exactly hefty, these beers are generally Marzens, which are fuller and darker than your usual lager, with higher alcohol and a malty, nutty character. Hofbrau's offering might as well be a Pilsener, and while light and refreshing, my expert friend and I agree that it is not exactly evocative of the season. But that's the way they are going, he claims: while America is just rediscovering its affinity for the mighty stuff, smote by the dark ages of Prohibition, the German's, our nation's forefathers in fermentation, are going the opposite direction.

Not all Oktoberfest beer, German or otherwise, is like the Hofbrau, of course. And, come to that, even the more "traditional" Oktoberfest beers have not always been as they are today. Brewing technology has changed a lot in the last few hundred years, from temperature controlled fermentation to genetic yeast manipulation to the pull-tab can -- these and myriad other advancements great and small have influenced beer's evolution, leading over time to a cleaner, more consistent, and easier to brew product. Spaten, Becks, Paulaner, and all the houses making a more traditional Marzen are still making a thoroughly modern beer; clean, clear, and crisp. Back in the day, they could never have made such a tame, domesticated drink, so close to water but in color and effect. So, did ja ever wonder what the peasants were toasting Prince Ludwig with way back on that first Oktoberfest in 1810? Well, now you can find out! 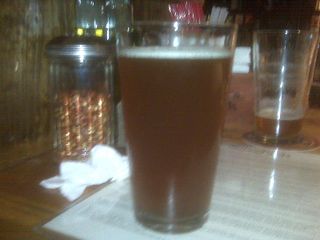 For the first time Hofstetten Hochzeitsbier von 1810 is available in DC! The beer is a mouthful, in name, flavor, and weight, coming in at a respectable 6.3% ABV. Made by a tiny brewery in western Austria (a brief three-hour drive from Munich, where Oktoberfest was born), the 1810 is an unfiltered Marzen lager, made by traditional means in very small quantities. Until recently, this beer was rarely seen off the continent, but importer B. United has seen fit to bless our fair city with a handful of kegs. I had the pleasure of a pint this past Wednesday at the Georgetown Pizzeria Paradiso ($8.75 / pint). The beer pours a deep, opaque russet brown, as you can see from my crappy cameraphone picture at left. The head is short, due to a naturally low carbonation, and dissipates quickly. While possessed of some of the malty sweetness typical of a Marzen nose, the 1810 has a lot more going on, exhibiting hints of citrus, dark red fruit, and lots of bready yeast. On the palate, it attacks soft (again, thanks to the low carbonation), leading to roasty malt and wheat, and then to a sour, acidic finish, reminiscent of many Belgian beers.

The Hofstetten 1810 is a fascinating exercise in retro brewing, and sure to be a real treat to Germanophiles and beer geeks alike. The 1810 is currently on draught at the Georgetown Pizzeria Paradiso (and will likely make a brief appearance at their Dupont location), and I am told that Brasserie Beck has also received a keg. Though the actual festival has come and gone, there's still a little time to taste a piece of Bavarian history.

Have you had the chance to try our local brewery (Blue and Grey brewery, Fredericksburg, VA)? Last year's Oktoberfest was outstanding. I just purchased a gallon myself, but have not tried it yet. IMO, These guys and gals produce some pretty good beers. I'm just a customer and avid beer geek, not affiliated with them in any other way.