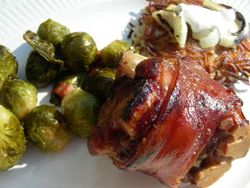 If you like pork and if you like beer, then you're in the throes of your favorite holiday and mine: Oktoberfest.

I don't know whether it's the glutton, the drinker or the German in me, but damn I love this holiday immensely (Well, not too immensely. I don't wear lederhosen or anything.). Thirty-three might be a little young to have a bucket list, but if I were to put one together, celebrating Oktoberfest in Bavaria would be toward the top. Hell, I'd even strap on a pair of lederhosen for the occasion (when in Rome, after all).

Just the idea that thousands of thousands of people getting together to drink maerzen and eat all manner of pork while singing beer halls songs is enough to get me down right frothy about the holiday. Then I came across the photo blog Orr Shtuhl posted on the Washington City Paper's Young & Hungry blog. Man, those pictures nearly made me say, "Screw the job, I'm going to Deutschland." Seriously, if you've ever thought about going over for the grand celebration you need to check out those photos.

But there's much more to German cuisine than brats and sauerkraut, even in the beer halls. So this year I decided to have a few friends over an Oktoberfest celebration featuring another staple of the beer hall: schweinshaxe.

Schweinshaxe is the roasted front hocks - or shins - of the pig. With all the recent interest in offal and charcuterie, pork hocks still fly under most Americans' radars. However, my wife, who studied in Bavaria, says schweinshaxe is as common as bratwurst and pretzels.

Given how easy it is to prepare and how unctuous the meat is (thanks to the fat and skin surrounding it), pork hocks should start making their way onto more of our menus.

However, the up side of pork hocks' obscurity is their price. I bought eight hocks from Wagshal's Market for $17. Along with the beer-braised brussel sprouts and potato pancakes, the roasted hocks easily fed seven people. 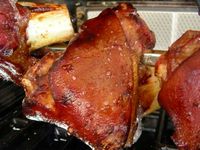 In Germany, hocks are typically braised, but I wanted to make sure the skin got crisp. So after braising them for a couple hours, I stuck them on a spit for 30 minutes. Afterward they looked like retirees in Miami - tanned and crispy. Beneath the crunchy skin was moist, soft pork covered in warm fat. I pulled a piece of meat off the bone and dabbed a little stone ground mustard on top. It was porky nirvana.

Now, you can't have Oktoberfest without beer. And with all due respect to American brewers, Germans make the best German beer. Whether it's hefeweizen or the maerzens traditionally made for Oktoberfest, German brewers simply do those styles better than we do. They just do. 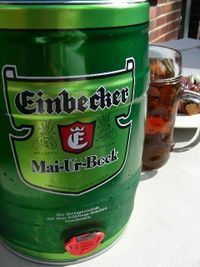 Keeping in the spirit of things, I hopped in the car and headed over to the German Gourmet at Bailey's Crossroads. You like German stuff? They got German stuff, including one of the best selections of German beers in the area. Rather than going with an Oktoberfest beer, I grabbed a 5 liter keg of Einbecker's Mai-Ur-Bock. It's a faintly sweet, well-rounded amber lager that is made for pork and potato pancakes. Sure, I should've grabbed the Paulaner Oktoberfest instead, but I knew I can find it on tap around the city. But give me some credit, I did get a mini-keg.

Roll out the barrel, baby! Prost! 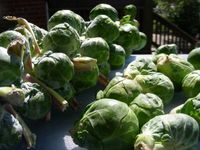 To begin, place the pork hocks, carrots, celery, bay leaves and the two roughly chopped onions into a pot and cover with water. Salt the water generously, cover and bring to a boil. When the water comes to a boil, reduce to a simmer and cook for two hours. 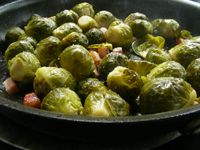 Heat a frying pan over high heat. When the pan is hot, add the bacon and brussels sprouts, reduce to medium high heat and cook until the bacon is crispy and the sprouts have browned some, about 15 minutes. Remove from the pan and cover loosely to keep warm.

In a sauce pot, pour the remaining three beers and a dozen or so black pepper corns, and bring to a boil. Once the basting liquid is boiling, turn the heat down and reduce the liquid by half.

When the pork hocks are cooked, pull them out of the pot, pat dry and stick on the rotisserie rod. Load the pork hocks on the grill and cook using medium heat for 30 minutes. Baste with the liquid every 10 minutes. Also, grill the slices of onion. 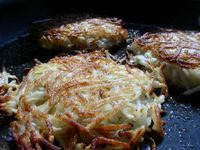 As the pork hocks spin, beat the two eggs and combine with the potatoes.  In a hot pan, add a couple tablespoons of oil. As the oil heats, take a portion of the potato mixture, form it into a patty and place in the pan. Season with salt and pepper. Cook for three minutes or until a brown crust forms. Turn, season and cook the potato pancake for another three minutes.

When the potatoes, onions and pork hocks are cooked, plate them with the brussels sprouts and top the potato pancakes with the grilled onions and a dollop of sour cream. If you haven't already, tap the keg and pour the beer.