Spain has been a hotbed for value priced wines for several years now, long enough that the wine magazines' calling it the "next big thing" is getting a bit old. It makes sense, though, that the Spanish should make lots of good cheap stuff, having more acres under vine than anyone else, and hundreds of years of winemaking heritage under their belts.

Most of the great values coming out of Spain are thoroughly modern -- light bodied and fruity, but concentrated, high in alcohol, and ready to drink on day one. Contemporary winemaking technology has made this style surprisingly easy to do well, and thanks to modern taste and a bit of promotional encouragement, the fruit bomb style is now the height of fashion.

It is nice, and indeed, a necessity for apartment dwellers, to have wine that is ready to drink without cellaring -- hell, with my tiny wine fridge, if I had nothing at hand but heavy, tannic Bordeaux, I'd be relegated to about a half case a year, which just would not due. Before clonal selection, carbonic maceration and other fancy-schmancy new techniques, the Spaniards came up with their own method of smoothing out their tannic-ass tintos: age 'em well and good.

Traditionally, in Spain's most storied wine regions, no wine was released before it was ready to drink. In poor vintages, this was no problema, as the washed-out juice was about as good as it was gonna be right off the bat. For better years, a complex system of aging designations was established and encoded into law. After six, twelve, twenty-four or more months in barrel, even the tightest wine would reveal itself, after which time it would rest in bottle at the winery for some time before release. The big daddy of the Spanish system is the Gran Reserva. In Rioja, a Gran Reserva must have spent at least two years in oak, followed by another three in bottle, before release -- these criteria vary by region, but are generally pretty stringent, though many producers choose to go above and beyond.

As you might expect, all that aging ain't cheap, so Gran Reservas often fetch a hefty price, most now selling for $100 or more! Thus, when I stumbled on the Bodegas Navalon Anciano Gran Reserva 1999 for $11.99 at Schneider's of Capitol Hill, I was nonplussed. Though I figured it for dubious, over the hill plonk, I let my curiosity get the best of me and picked one up, and was later very pleasantly surprised. 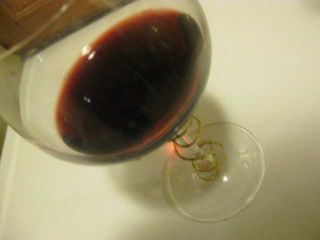 The Anciano Gran Reserva 1999 is a Tempranillo based wine from Valdepenas region of southern Spain; beyond that, I haven't been able to find much credible information. But that's okay, because the wine rocks! The Anciano pours a deep garnet, with brick-red highlights around the edge. Musty leather mingles with prunes, licorice and a hint of woodsy oak on the nose. On the attack the wine is soft, with most of its bitter tannins smoothed away; despite this, the flavors remain amazingly lively considering the wine's age, with tons of blueberry and strawberry leaping to the front. More woodsy and purple fruit flavors shine on in the middle, hung on a full, slightly chewy body, leading to a lengthy earth and rhubarb pie flavored finish.

The balance and fruit flavor on this wine would make it a steal for $25; being 10 years old, and having real, old wine flavor, at half that price, makes it unbelievable. I was told at Schneider's that this was a closeout from a now defunct distributor, but that they'd bought a "good amount," and should have it for awhile. Don't wait till it's gone, as the Anciano is the perfect autumn wine, and I've found it to be a great compliment to lamb, sweet potatoes, and roasted squash. And, as if that weren't enough, you can use the gold wire net to make yourself a sweet glass decoration like mine pictured above!