Rustico: Best beer bar or church of the hopped and malted? Both, actually. 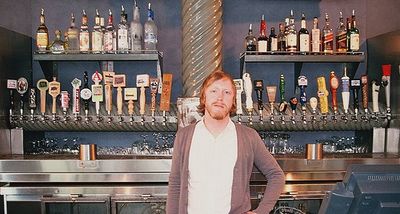 I am not a man of faith, but I have heard the word. I have gotten religion.

I have spoken with Greg Engert.

If ever there was a revivalist pushing the gospel of quality hops and barley, Brother Greg would be that man. His church would be Rustico.

For the past three years, Greg has been beer director for the Alexandria restaurant. In that time, his passion for beer -- craft and otherwise -- has turned the neighborhood eatery into one of the area's best beer bars.

The day I arrived to talk to Greg, he was getting the restaurant and his staff ready for Rustico's Oktobeerfest and the 3,000 eager beer drinkers who would descend on the place the next day. It looked like they were gearing up for a military campaign. Kegs, many, many kegs, of pumpkin beer and other fall seasonals were double stacked in the walk-in and along the bar's back wall. Out back, tables, coolers, taps and tents were stacked in the parking lot, ready for assembly.

This is the third year Rustico has put on the event and Greg was expecting the masses. He knows these people. So in addition to the Maerzens and harvest beers, Greg set up a couple cask condition ales. He was gilding the lily. The beer geeks and drinkers who'd show up the next day would be more than happy with 14 craft beers, but the two cask ales would put them over the top.

Greg knew this because it would put him over the top, too. 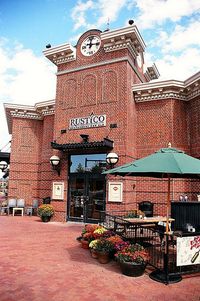 I realize Rustico is a restaurant, but look at the beer menu. Actually, when I sat down with Greg to talk about Rustico's beer program, he popped out of his chair to show me the menu. Rather than organize beers by style (pilsners, stouts, IPAs) or geography (British, German, etc.), Greg organizes them by flavor. Want something crisp? Try a Brooklyn Lager. How about a beer with a roasted flavor? Have a Founder's Breakfast Stout.

In fact, Greg's fingerprints are on all of the Neighborhood Restaurant Group's (NRG) properties. So if you like the beer lineup at Columbia Firehouse, thank Greg. EatBar? Thank Greg. And then there's the much-anticipated Birch & Barley and ChurchKey, an incredibly ambitious beer bar NRG is opening in D.C. Its success or failure will depend mightily on Greg.

Though these outlets, Greg has quietly spread the word about good beer. Beer enthusiasts who trek down to Rustico know there's a lot of craft beer to be had. But the people heading over to Vermillion can opt for craft over cocktails. The guy who'd be just as happy to have a Bud with his burger at Columbia Firehouse can try a better American beer instead.

Talking to Greg about beer is like talking to Baptist minister about sin and Jesus Christ. He wants you to know why he does what he does. He wants people to enjoy the beer and Rustico as much as he does. Birch & Barley and ChurchKey may be the next big thing, but Greg fully intends for Rustico to remain a destination for beer geeks and regulars.

Although Rustico was launched in March 2006 as a restaurant and beer bar, for the first few months there wasn't consideration given to the beer selection. It lacked focus. The NRG folks recognized this and recruited Greg from the Brickskeller to improve the lineup.

Today, Rustico has 24 American crafts and imports on draft, as well as a beer engine, because they know from good beer. Local beers regularly find their way onto the taps (Clipper City's Big DIPA Double IPA was on the hand pump the last time I was there), but Greg doesn't necessarily emphasize them. Again, it's about the flavor.

In an effort to strike a balance with Rustico's beer line up, Greg maintains a steady rotation of flavors on draft and in the cooler. So the Hop, Roast, Malt, Smoke and other flavor categories may feature Troegs, Flying Dog and Starr Hill one day. And they may feature Samuel Smith, Aecht Schlenkerla Rauchbier, and Left Hand the next. It all depends.

Speaking of Rustico's cooler, there's a lot of beer in there. More than 200 different beers as a matter of fact. And the cases of beer stacked on an upper shelf near the ceiling in the back? They haven't been forgotten. Rustico rigged the air conditioning system to keep the rare reserve bottles cool.

All this is well and good, but Birch & Barley and ChurchKey will have 50 beers on draft, and four different beer coolers will be kept at different temperatures to ensure that the beer stored inside will be at the optimum temperature, and the draft-line system will look like a great big beer organ. So why the hell would anyone in the District hump down the damn George Washington Parkway when they have all that right there?

Because it won't all be at the ChurchKey.

Sure, there will be a lot of different, very special beers at the new D.C. spot, but some things -- like the beer Greg brewed at the Sierra Nevada brewery -- will only be available at Rustico. And events like Oktobeerfest, brewer's dinners, private beer dinners and launch parties, will continue at Rustico. So will Greg.

Birch & Barley and ChurchKey is a big project, which Greg is personally and professionally invested in, but he plans to continue overseeing the beer lineups at all of the Neighborhood Restaurant Group's properties, including Rustico. And as long as Brother Greg is at the pulpit of the beer bar he made grand, that place is going to be alright.

Now, Rustico might be a great beer bar, but it ain't perfect. First, Rustico is a restaurant. As I've said before, I like my beer bars to be bars. Chef Steve Mannino might be doing some good work in Rustico's kitchen, but I'd prefer more division between the bar and restaurant. As it happens, Greg and Steve work to bring them together. In fact, Greg is quick to acknowledge the fact that Rustico is a restaurant first and a beer bar second.

Then there are the bartenders. This might be where the most work can be done. One night, the bartender is eager and friendly, introducing himself and attentive to our questions and needs. Another night, another bartender meanders behind the bar. When he gets around to taking our orders or to check our drinks, the 1,000 yard stare is locked in place. The guy may be there, but he's definitely not there. If Greg had a cadre of bartenders working as hard as the first guy, he'd have a hell of a team. As it is, he has a pretty mixed group: some mediocre, some outstanding.

Finally, there's the beer. Certainly, Rustico has one of the best selections of taps and bottles in the D.C. area. But I do have a few quibbles. Let's take the beer engine. My love for this machine is a matter of record. It's one of the greatest devices Western Civilization has ever created. However, it does require a skilled hand to operate. That might explain why during one visit when I ordered a cask ale, the bartender poured half my pint from a pitcher in the refrigerator and finished it off with the pump. When I asked why he did that, I was told it was to reduce waste. That didn't make sense to me then and it still doesn't now.

Also, I don't understand why there isn't a more specific focus on local breweries. One of the great things about the craft beer movement is the emphasis that's placed on supporting local brewers. To Greg's credit, I've always found a few local beers on draft, if not in the bottle. However, being local doesn't assure a brewery a spot in Rustico's lineup. I would hope that it would.

Want to see more photos of Rustico? Check them out here.