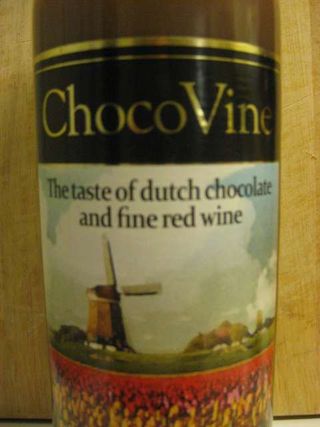 I have a problem with Baileys. No, not like a beef with it, more like an addiction. As soon as the weather gets cool, and the noon sun gets closer to the horizon, stores put up those stacks of shiny, shiny gift packs, and I invariably pick one up. "What the hell?" I ask myself, "I'll just have a glass or two after dinner." Yeah, right -- fast forward to 48 hours later, and that bottle is gone; that's twenty-some-odd bucks, down the hatch all too quickly.

There has got to be a better way! Oh, sure, I could try to exercise a bit of willpower, but I have no illusions about myself. As the nights get longer and the ol' melatonin levels drop lower, my willpower loses what little influence it ever exerts, and gets put away until March. But a $22 bottle of Irish cream every two days is just not sustainable. Thus was my curiosity piqued when I saw ChocoVine at a DC shop last week. As you can see from my picture, it looks kinda like Bailey's, and one of the gentlemen at the shop assured me that it tasted just like Baileys... and this for $12.99? I'd had cheaper Irish creams before and been less than satisfied, but this was something altogether different, and the price was right. Sold!

ChocoVine is a new beverage made in Holland from a combination of chocolate and Cabernet wine. According to its website, ChocoVine is "the perfect union of wine and chocolate," and sure to "create a near-orgasmic taste experience." Quite the claim! So I brought the ChocoVine home, and I am afraid it didn't quite get the reception I had hoped -- my girlfriend also likes the Baileys, but living with a crazed addict, she rarely gets to have any, and was disappointed by my knock-off replacement for the bottle I'd downed. But eventually, despite the cheesy trade dress and dubious origins, she was grudgingly won over, and I, too, felt my $13 gamble a success. 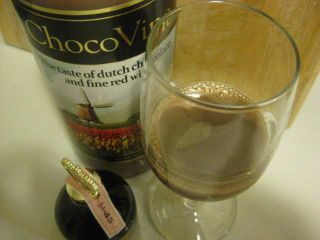 ChocoVine, beyond opacity, doesn't really bear much resemblance to Baileys at all. For starters, it is thinner than Irish cream, though still quite thick, and almost buttery on the front. ChocoVine pours an odd shade of dark muddy brown, looking much as you might expect of a combination of red wine and chocolate. Though Baileys does have cocoa nibs in its recipe, ChocoVine tastes much more heavily of chocolate, and is markedly sweeter on the finish. In a nutshell, ChocoVine tastes like really strong chocolate milk, with the slightly gritty texture of a heavily cocoaed drink, and a slight bite thanks to its 14% abv.

Neat or on the rocks, Chocovine is a little cloying and oddly textured -- but shaken a bit with ice, it mellows out nicely, and develops a slightly foamy, more milk-like mouthfeel. We also sampled a few of the cocktails listed on the ChocoVine website, and found the Lady's Night (2 parts ChocoVine, 1 part Chambord, shaken with ice) to be a very pleasant nightcap, a fact I don't consider the least bit emasculating. Haven't tried it yet, but we've both been eyeballing that bottle of peppermint schnapps someone gifted us several years ago...

I picked up my bottle at Dixie Liquors (3429 M St NW), but I am pretty certain I have seen it pop up at several other stores in the last few weeks. Fellow closet dessert drink fiends, I will not go so far as to say that ChocoVine surpasses the glorious liquid crack that is Baileys, but it is a damned satisfying and versatile alternative for the money. Pick up a bottle and let me know what you think!

That's funny. I went to a wine party and someone brought Chocovine. It's one of those things where you want to try it because you've never had it before, but you never want to experience again. =P

Oooo... one dissenter already. Fair enough! Anyone else?

I'm a fan of Chocovine. It doesn't have that heavy coat your mouth feel (the one downside to Baileys).

How can anyone say something bad about Chocovine? It's Heaven in a bottle for chocolate lovers.

I agree with Deb's review, and love Chocovine!

Has anyone tried homemade Irish Cream before? After trying that, you'll never like the commercial taste of Bailey's again. A bit cheaper to make it yourself too. I like Chocovine with Van Gogh Espresso vodka.

Love it or hate it, Chocovine is fast becoming a single sku baby Yellow Tail. The importer went through 12,000 cases in 10 days and thought 10 containers every two weeks would be plenty. He was wrong and is doing his best to keep up. I believe 2009 was the first full year in the US market and Chocovine will do over 75,000 cases. I believe Smoking Look started this way and went from 75,000 cases to over 400,000 cases the following year. Chocovine is reaching out to the non wine drinker just as Yellow Tail did with its sweeter profile.

A chocolate beverage with 14% alcohol... say whaaaat? SOLD ;) I recently tried the Van Gogh Espresso vodka and though it was fanflippintastic! I'm excited to try ol' Chocovine with a possible rendevous with the Van Gogh. Thanks for the review!

The Today show did a segment today which included Chocovine. I googled it and landed here. I called the local beverage store (Northern Michigan) and will pick up a couple of bottles today. How can red wine and chocolate be bad??

I have to say, the more I drink it the more I love it - I can easily see getting addicted!

ChocoVine is yummy! So has anyone tried it with Peppermint Schnapps yet?

I love ChocoVine! At first the thought of red wine and chocolate turned me off, however, when I tasted it, I was pleasantly surprised. I actually can get a bottle for $6.99 in the liquor store (that's really a great place) by me. It's always sold out quick, so alot of people MUST really enjoy it. Four stars for ChocoVine. Try it!

My brother and sister-in-law bought me a bottle of Chocovine for my birthday a few weeks ago and I have to say, I loved it!! Being the chocoholic I am, I really hated sharing it with everyone. I'm now trying to find a place to purchase it in Dallas, TX (they bought it in FL).

I stumbled upon this blog after picking up a bottle of ChocoVine for 8.99 in Omaha. I thought the concept was interesting and am not much of a drinker of any kind of alcohol, wine or otherwise.

I found it to be akin to Yoohoo with rubbing alcohol in it and it reminded me of my misspent days of youth pouring cheap vodka into any drink I could think of - luckily Yoohoo wasn't one of them.

The bottle promotes it as a wine, not a liqueur, but I think if treated more like a liqueur it might be more palatable. It sounds like the people who really liked it didn't drink it like a wine, but used it more like a mixer. I can imagine that the espresso vodka would be good with it, then again, I thought it could be good on its own.

It could be quite good with some ice cream, but I won't be drinking it straight ever again.

I tried ChocoVine at a friend's house the other night. I was leery, but I was pleasantly surprised. It just tasted like whole chocolate milk. It was much improved after a spin in a margarita mixer with a little cap of whipped cream. Like a milder mudslide-type drink.

I've been a Chocovine addict for several months. For the perfect after dinner dessert treat, put Chocovine and a few ice cubes in the blender- and eat it with a spoon!

I would like to know the nutrition on Chocovine. Sugar and calories.

Hey Janine I found it in Dallas!! Well not actually Dallas but Plano at Sprouts. They said that they just got it in for V day but I told them they need to start carrying it since no one around here has heard of it and there are people out there who keep asking for it. The wine guy at goody goody said they keep getting requests for it but they had no distributor here in the area :)

OMG, LOVE CHOCOVINE!! Stumbled on it here in Jersey while shopping for my wine and been hooked ever since. I have turned my other friends onto it as well and we LOVE IT! A bottle a week :) Love it cold and straight up!

I found it at the Sprout's Farmers' Market in the Dallas, TX area for $8.49. Delightful! I would be reluctant to put it in my morning coffee, as I do Bailey's sometimes.

Found ChocoVine at The World Market here in Ohio around the holidays,they always have a tasting of something. Brought a case that very day and it was going fast.

I make it my business to keep it in the house.

I love ChocoVine! It kinda tastes like a mudslide to me. I haven't tried any of the cocktails yet. So far I prefer it on the rocks.

I've never been a dessert drink person, and don't think I've ever really tried Bailey's without ice cream, but I picked up a bottle of ChocoVine tonight in Lincoln, after hearing much about it at work. Completely agree with the previous YooHoo + rubbing alcohol comment...but when it's put on ice, it is absolutely the most perfect dessert drink. Pretty sure I'm hooked. =D

If Chocovine is comparable to Bailey's in cream and sugar content, then there's over 400 calories in a single standard 5 oz. wine serving! I emailed their customer service requesting info and they REFUSED! Apparently the FDA doesn't require something labeled as wine to have nutrition information. Totally sketchy. Try it yourself: info@chocovine.com

I, too need nutritional facts. I wear an insulin pump and have to bolus every time I eat or drink anything. I am not experienced in alcoholic beverages, but this is one that isn't bad for me and I love it.

Love it!! Yes it does take the place of Bailey's in my house. CHEERS!!

ummm, ummmm, ummmmm! I love the first sip =Baileys then when it hits my throat=red wine! I'm hoarding the bottle that I received as a gift, because I can't seem to find it in Massachusetts...and it can't be shipped here! My friend bought it in Maine. Maybe I'll take a road trip!

I added crushed ice and a dollop of whip cream, and voila-- a very nice mudslide-ish drink. What is unique is that the aftertaste has a wine flavor, in my opinion.

Enjoying a glass now! Love it!!!