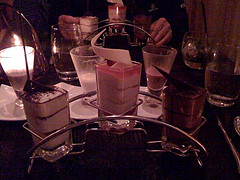 Co Co. Sala is a chocolate lounge and boutique that caters to a late night crowd. It says so right on its Web site.

For the most part, that makes sense. It's evening menu is dominated by an array of (mostly) chocolate desserts. At either of its two bars, you can order a chocolate stout or Co Co. Sala's signature cocktail, the cocojito (I'd encourage you to do so. It's quite good. Also try the flight of scotches. Good stuff and a surprise find in the chocolate lounge.) And stationed around the lounge and boutique are blocks and boxes of chocolates for sale, which are made in the back, behind a window, allowing you to watch the chocolatiers at work. Even the décor is heavily accented in reddish brown chocolate tones.

So I get it, Co Co. Sala is a chocolate lounge and boutique. What I don't get is Co Co. Sala's other side. Is it also a restaurant? Should I keep it in mind for lunch or on Sunday for brunch? How about in the evening before I wade into the dessert menu, should I expect to have dinner beforehand? 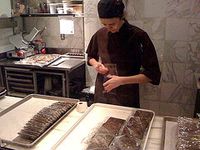 I don't know. To try and figure this out, I recruited the services of my wife, Trish. She's exactly the kind of chocolate lover Co Co. Sala is courting. Whatever my thoughts are about its savory offerings, Co Co. Sala is a chocolate and dessert destination.

That said, let's start with the savory and end with sweet (that is the natural order of things after all).

My first visit to Co Co. Sala led me to the bar. Now, I either learned that day that Co Co. Sala doesn't have appetizers or has nothing but appetizers. It depends on how you look at it.

The evening menu offers a dozen small savory dishes; from lobster salad, to a blue cheese beef slider, to mac and cheese. I opted for the Moroccan swordfish slider, which came out as a beautifully grilled piece of fish nestled within a tiny, soft bun. It was great. But it was tiny and it was eight bucks.

That's where my main beef with Co Co. Sala lies. With dessert, a little goes a long way. But with savory dishes, more is more (to a point). Put another way, three of those sliders would have made a nice sized appetizer, but it would have put me back nearly $30. That's more than most entrees around town.

So Co Co. Sala isn't a dinner destination. If you want to come in for a five-course dessert, but want to start with tuna tartar, they've got you covered.

During the day, however, Co Co. Sala shifts its focus away from dessert in an effort to attract the lunch and Sunday brunch crowd. Admittedly, I've never tried Co Co. Sala's brunch, but judging from my lunch experience, I imagine it's good.

The problem is, Co Co. Sala is a chocolate lounge that caters to an evening crowd, not a lunch destination in a neighborhood (Penn Quarter) that's loaded with restaurants. 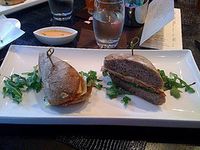 This is not to say Co Co. Sala can't do lunch. During a recent lunch, my beet and goat cheese salad was delicious and colorful. The spinach and feta tart with tiger shrimp was a surprise when it came out as a spinach and feta tart, with tiger shrimp in a dill sauce on the side. Still, it was quite good (the tart tasted exactly like a Pizza Hut pan pizza. I like Pizza Hut pan pizza.) The salami and parmigiano-reggiano sandwich my buddy ordered was good, though it could have used less bread and more meat. But the parmesan and rosemary fries he got were reason enough to make Co Co. Sala a regular lunch destination.

So Co Co. Sala can do savory. It just doesn't seem like it wants to. Or if it does, the savory parts of the menu don't seem well thought out. Although the lounge introduced the lunch service and does brunch, it still feels like a lounge. In the evening, when diners and dates fill the low tables and booths, Co Co. Sala looks like it's fulfilling the vision of owners Nisha Sidhu and Bharet Malhotra. But during the day, when a handful of diners are slumped over the same small tables eating salami sandwiches and drinking iced tea, I have to assume that this is less the vision and more a means of making a few extra dollars.

If I'm right, Sidhu and Malhotra should put some effort into their savory menus and make Co Co. Sala the lunch and dinner spot they seem to be flirting with. Otherwise, they should stick with what they do best: dessert after dark.

Speaking of that, I'll have Trish talk about the desserts...

So much chocolate, so little time (and money). What's a chocolate-lover to do when confronted by a menu that's at least 75% chocolate?  It took me quite some time to figure out what to order. I'd eaten at Coco Sala before, but I hadn't had the appetite to order one of their multi-course dessert offerings. This time I was ready.

To start, beverages.  I'm currently in my third trimester of pregnancy, and so unable to enjoy Co Co. Sala's interesting chocolate-themed cocktails on the menu. Unfortunately only one of the drinks is made "virgin," but it lacks chocolate. (For the majority of you who are not in the family way, I highly recommend the cocojito, which I tried some months before the pregnancy. The combination of chocolate with tart citrus and mint is irresistible.)

Happily, the flight of hot chocolates came to my rescue. There are five to choose from, and of the three I had, two could be dessert in their own right. I didn't enjoy the white chocolate, which I tried because I wanted to step outside my dark chocolate comfort zone. After a few sips it reminded me of sweetened, condensed-milk, straight up. But the peanut butter milk chocolate, and the dark chocolate were divine.  The peanut butter milk chocolate was rich, silky, and salty with peanut flavor. A cup of this would more than suffice as a dessert after a full meal. The dark chocolate was lighter and more bitter by comparison, although the chocolate flavor was not as strong as I would've liked.

As much as I enjoyed the hot chocolates, I was there for the Monde du Chocolat, Co Co. Sala's selection of 3 and 5-course desserts. After a brief flirtation with the Asian-themed course, I settled on the Italian 3-course because I'm a huge sucker for good tiramisu, the star of the main dessert course.

Three flavors of tiramisu are offered as the "main dessert," with a small dessert course before and after. Before I get to the tiramisu, however, let me praise that first little dessert - a vanilla panna cotta bite with chocolate praline soup. I'm not that excited about vanilla, but I got excited about this dish. The vanilla flavor was so clean and pure I could've happily eaten more than just the three or four tiny spoonfuls that were offered. The chocolate praline soup was second-fiddle at best. But then came three varieties of tiramisu (top photo).

Surprisingly, the "traditional" variety was forgettable: it lacked enough chocolate and espresso to make it worth the calories. The fraise-de-bois, on the other hand, was a knock-out. I would never have thought to put strawberry and espresso together, but they were a wonderful combination with the creamy interior of the tiramisu. The final tiramisu -- chocolate tiramisu -- was just the dark, bitter chocolate hit I was looking for. For all you dark-chocolate lovers out there, this is your tiramisu: everything is chocolate-soaked. The final course of two small Italian cookies included a very interesting ricotta cheese bite, whose light sweetness I thoroughly enjoyed after the tongue-coating dark-chocolate. Drew's not as into chocolate as I am (that is a significant understatement), but he ordered the main course of the "Xocolatyl: Aztec Experience" trio. The star of the plate was undeniably the tiny chipotle truffle, which had the perfect balance of deep chocolate richness and heat. I've had the pepper/chocolate combination before, but rarely have I tasted it so well executed. The hot chocolate souffle was everyone else's favorite, but I found it bland. (Note from Drew: I really did like this dessert. The sweet/heat thing isn't always done well. It is at Co Co. Sala.)

Overall, Co Co. Sala's sweet offerings provide something for everyone. If you're not a fan of big, rich dark chocolate flavors like me, there's still plenty for you to enjoy. (If you don't want any dessert at all, you're in the wrong place.)  And if you're just looking for a chocolate fix, skip the Monde du Chocolat and head for the "Dolce" selection of small plates where you can find a selection of artfully decorated artisanal chocolates with a variety of fillings that will hit the spot without filling you to the point of popping.

I've had brunch at Co Co. Sala and enjoyed it a lot but it certainly has its own unique twist that may not be for everyone. I like this place a lot and thing they do a good job of offering something a little different but you have a valid point in regards to their dinner menu and prices. The chocolate-cover bacon kept me pretty happy though!

I personally responded to Drew and Trish's thoughtful review...I didnt have their contact info so I emailed it to the emails below...kindly forward to them. I would be very thankful.

I've been to Co Co. Sala several times during the evening and enjoyed the experience. It's a great place to meet for drinks and enjoy dessert. But Drew's got a point about lunch. I can't imagine trying to hunch over those low tables for a full on meal.

I went to Co Co Sala for my birthday brunch and it was fantastic. So much tasty goodness on one table. I also held my bridal shower here and it worked out well. I agree that the tables are low which makes it difficult to eat as you normally would, but for a party it works extremely well and makes it more festive. Plus, they opened up the restaurant early just for us!

Just went for the 1st time last night for me and my bf's anniverary. I have mixed feelings about this place.

I love the brunch, and the lunch I had there was surprisingly great.

I just think they should only open 1 part at lunch - the part with the tables. I've been seated at those low tables with stools each time and it's very annoying. Uncomfortable and makes the meal feel like it's dragging on.

BUT, the food is great

It sounds interesting. I love to go there to have something to eat. I think it will be very happy for me. Thank you for sharing.