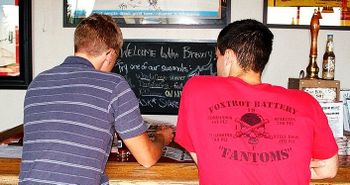 It's probably the beer.

Aside from the brewpubs we have in D.C., the District is devoid of any beer makers. However, our northern neighbors have two outstanding breweries, each just a 45 minute drive away: Flying Dog in Frederick, Md., and Clipper City in Baltimore. And once you're done at the breweries, both cities offer other great destinations, including brewpubs (pace yourself).

A few years ago, my wife and I toured Scotland by Scotch distillery. It gave us the excuse to visit a number of small towns and villages, including Oban and Pitlochry, that we would've otherwise driven through or avoided altogether. I'm applying the same approach to visiting Frederick and Baltimore.

I don't know about you, but it's hard enough for me to find a reason to wander into Bethesda or Alexandria. So Frederick and Baltimore might as well be in Maine. But the promise of checking out the inner workings of two outstanding craft breweries is enough to draw me out of the District.

For this two part series, I'll first focus on Frederick, Md., and Flying Dog Brewery, followed by a look at Charm City by way of Clipper City.

Flying Dog is one of the very best craft beer makers in the country. These are the good folks who brought us Gonzo Imperial Porter, Double Dog Double Pale Ale, and Raging Bitch (not making that up), their new Belgian-style IPA. Ralph Steadman, the man who illustrated Hunter Thompson's Fear and Loathing in Las Vegas and Fear and Loathing on the Campaign Trail '72 , illustrates Flying Dog's beer labels. And the brewery was just named the 2009 Mid-Sized Brewing Company of the Year.

(A quick -- bitter -- aside. For the past couple months I've been working on a piece on bars in the D.C. area that have hand pumps. So I dropped a few F-bombs last Wednesday when I saw that the Washington Post had two - two! - articles dedicated to hand pumps and cask ales. Blake Gopnik and Greg Kitsock did a nice job on both articles, though Kitsock didn't mention District Chophouse in his rundown of bars with beer engines. Take that, old man! Anyway, enjoy all the shots of hand pumps I took. Damn it.)

By all rights, Flying Dog should still be in Colorado. As big a fan as I am about many of our East Coast breweries, Colorado and Oregon are the twin Meccas of American craft brewing. Until a few years ago, Flying Dog was located in Aspen, Colo., where George Stranahan and Richard McIntyre launched the company as a brewpub. In time, the Flying Dog folks realized most of their business was on the East Coast. So in 2006, they left Colorado and moved into Frederick's Wild Goose brewery, which they had purchased a few years earlier to handle their East Coast accounts. Today, the brewery produces not only Flying Dog beers, but also Wild Goose, Terrapin and a few other micro beers on contract.

You wouldn't know that walking into the tasting room. The room at the front of the brewery looks like a Ralph Steadman art bar. Steadman's paintings and illustrations hang behind the bar and around the room, while the tap line is full rundown of Flying Dog's sizable array of beers. In addition to the regular taps, the tasting room's bar has a nitrogen tap and the aforementioned beer engine. Outside, the windows are ringed by hop vines and the trellised patio almost makes you forget you're drinking in an industrial park.

For $5, Brian Arnold (left), Chet Hopper or one of Flying Dog's other staffers will walk you through the brewery and pour you five 6 ounce samples (in truth, I got six samples when Brian offered everyone a taste of Doggy Style Pale Ale straight from the bright tank). For the most part, a brewery tour is a brewery tour, so I'm always interested in the little details. At Flying Dog, it was the pairs of boots hanging off a pipe over the brewing floor. Apparently, when Flying Dog staff leave the brewery, they get to toss their boots over the pipe. You have to like that (well, that and the beer from the bright tank).

After the tour and samples, I headed into downtown Frederick. Thanks to Bryan Voltaggio, Frederick is on the foodie map. The Top Chef contestant's restaurant Volt made it into the Washington Post's Dining Guide and the chef's table - Table 21 - is booked into next year (my reservations are for April 2010).

On the day I was visiting, Frederick was holding its In the Street festival, an event celebrating the city's historic downtown. Flying Dog had three booths spread out across the festival, one of which was in Volt's parking lot. That's where I ran into Stephanie Hinote, the brewery's marketing director. She was making the rounds to Flying Dog's booths where they were passing out samples of Raging Bitch. Like the tour, the booths were manned by Flying Dog's brewery staff, including brewer Larry Pomerantz, who made the Colorado to Maryland move with the brewery, and cellar tech David Kozloski, who worked at Virginia's Breaux Vineyards before joining Flying Dog (left and right in the photo, respectively).

Why the Flying Dog roll call? Because I thought it was nice that Larry, David and the other Flying Dog folks were hanging out at the festival, drinking a few beers and pressing the flesh with their Frederick neighbors. The brewery could just have easily recruited volunteers. They didn't and good for them. 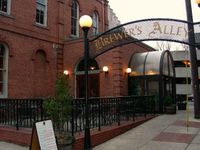 Oh, and try the IPA. It's excellent with the oysters.

A tip from Stephanie led me a block down Frederick's main drag, Market Street, to Firestone's. Like Brewer's Alley, it offers an upscale pub menu. Unlike Brewer's Alley, it pours other people's beer. It's a good place. Try the burger and truffle fries. The fries were salty, earthy and garlicky, while the burger was big, juicy and as bloody as I ordered it. Now you could wash it all down with one of the craft beers off their beer menu, or you could get a Flying Dog draft. At this point, I leave it up to you.

So there you go: a Top Chef chef, a quaint downtown, and a great dining scene, all less than an hour's drive away. If you haven't visited Frederick yet, maybe a tour of Flying Dog and its tasting room is just the excuse you need.

Additional photos of Flying Dog and Frederick are available here.

Great meeting you at the HH last night! Great photos by the way. I always see Flying Dog beers at the stores but never realized they were in the area. Now that I know they're a local brewery, I'll have to try them out!

Hey Mary, it was good to meet you too. Yeah, we're pretty lucky to have a number of great breweries in our area, with Flying Dog at the top of the list.

Wow，great content and your blog template is so beautiful. Is this template free or not. If so, would you please share this template? if not, how much does it cost? Thanks a lot!

It's so lucky for me to find your blog! So shocking and great! Just one suggestion: It will be better and easier to follow if your blog can offer rrs subscription service.

I just found your blog, and I stumbled across this entry. I'm from Frederick, so I really appreciated this post!