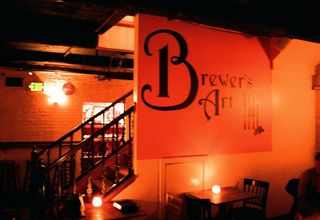 What do we know about Baltimore?

What I didn't know until a few years ago was that Baltimore is a town for beer lovers (yeah, take that Virginia.). There's Max's Taphouse and Mahaffey's Pub with their wonderfully long beer lineups. There's The Raven Special Lager, which is the only style of beer Baltimore-Washington Beer Works makes - and may be the only style of beer Stephen Demczuk needs to make. It's good stuff.

And then there's Clipper City and The Brewer's Art; one a brewery and one a brewpub, and either reason enough to suffer the Baltimore-Washington Parkway. 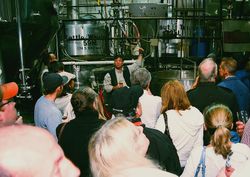 To go on a Clipper City brewery tour is to follow a wandering performance. Hugh Sisson, founder of Clipper City, has done a bit of acting in his day, which becomes immediately evident when he kicks off the tour with a dramatic reading. The man's a showman.

For a mere $5, you get a glass and stack of wooden nickels good for a few pints of Clipper City or Heavy Seas beers on draft in the brewery's tasting room. As for the tour and one-man show, that's free.

Clipper City is smaller than you think. At 13,000 barrels per year, the brewery produces less than half the amount of beer as craft brewing heavyweights like Dogfish Head, Stone and fellow Maryland-based craft brewery Flying Dog. But being Charm City's southern neighbor, we don't lack for access to Hugh Sisson's beer. Good thing. I like Hugh Sisson's beer.

As is the case with many craft breweries, Clipper City began as a brewpub, sort of. In 1989, Sisson and his father Al gave Baltimore its first brewpub since Prohibition when they began brewing house beers in the back of the family restaurant, Sisson's. Looking to get into commercial beer making, Hugh left the Federal Hill brewpub in 1995 to start Clipper City. Eight years later the Heavy Seas line set sail.

The Heavy Seas beers have taken over Clipper City. Touring the brewery with Sisson, you can't miss the Jolly Roger hung over the bottling machine, the stacks upon stacks of Heavy Seas beer boxes ready to be shipped, the labeling machine loaded with labels of the upcoming Yule Tide Christmas ale (It's a Belgian triple!), or the pallets loaded with kegs full of the fantastically delicious Big DIPA double IPA. Sisson still brews beers under the Clipper City and Oxford labels, but Heavy Seas is clearly his primary line (so much so that the company will soon switch names from Clipper City to Heavy Seas). Throughout the tour, you get a history lesson of Clipper City beer, craft brewing in Maryland and how Hugh is intimately involved with both. Hugh works the crowd, offers samples of malt and hops, and eventually leads the crowd back into the tasting room to finish cashing in their nickels. (During the week, the tasting room serves as the office for Sisson and his staff. On one side of the room is Hugh's desk, on the other side is where marketing director Kelly Zimmerman and the other staff work. Wearing a bright red cowgirl hat and pouring beers for the tour takers, Kelly told me that taps, bar and benches in between the desks stay right where they are Monday through Friday. My office sucks.)

If Sisson's was Baltimore's first brewpub, The Brewer's Art is its best. Hell, it's one of the city's best bars. I was introduced to The Brewer's Art years ago by some friends who lived around the corner. I've loved it since. The bright front bar and white-table cloth upstairs dining room and lounge serve as dramatic contrast to the catacomb bar downstairs. 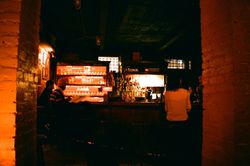 Every bar should feel like the downstairs bar at The Brewer's Art. With its mixture of nooks and low lighting, it's not hard to disappear into the space. If you're feeling a bit more communal, you can grab a seat at the V-shaped bar and order one of The Brewer's Art's many house beers, or order up a sample of the lot.

Although the cave-like basement would seem like the appropriate place to stick the brewing operation, the tanks are actually tucked into a room behind the first-floor dining room. Co-owners Volker Stewart and Tom Creegan clearly have an affinity for Belgian-style beers and a knack for brewing them. From the Ozzy to the Proletary Ale, these beers could be served in Brussels or alongside a plate of moules frites at Dr. Granville Moore's (In fact, Dr. Granville Moore's could serve The Brewer's Art's beers. The brewpub's Ozzy and Resurrection are brewed and bottled off-site, and available in the D.C. area, so ... you know, get on with it.).

Whether you're upstairs or down, the brewpub's kitchen is there for you. In keeping with the nattier theme, the menu upstairs is upscale, featuring sweetbreads, Kobe pot roast and pan-seared skate. Downstairs, the menu offerings are more pub fare, including a reuben flatbread pizza, pork belly and a respectable portabella sandwich (Tip: You can order anything off the upstairs menu while enjoying your evening downstairs.)

Regardless of whether you go in for the skate or a burger, don't skip the rosemary and garlic fries. Those salty, garlic funky fries just make you want to order another Ozzy, and there's nothing wrong with that (especially when a pint will set you back about $3).

Clipper City is a great craft brewery and Hugh gives a lively tour, but to be honest, an evening at The Brewer's Art is all I need to know about Baltimore to make the trip north.

Want to see more pictures of Clipper City and The Brewer's Art? Check them out here.

Really, a shot at the Orioles? Talk about the pot calling the kettle black.

Wait, are you busting my balls for being a Bucs, Bulls or Rays fan (all are fair game, I'm just trying to understand)?

I haven't been to Brewer's Art in too long. Time to get in touch with my near-North friends.

Thanks for the posting with all the things to do.
Brewer's Art is a great place.

That should be enough for them to learn and be patient with. I hope so.. We all go through such stages. rowing machine