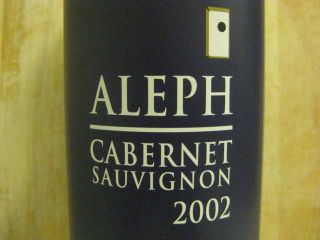 Hmm... I wonder how accurate this column title is at this point. The economy is on an upswing, after all, and I am starting to feel a bit unpatriotic, dwelling our nation's shortcomings so. Maybe I should be calling these things "Recovery Refreshment," or maybe, "Boozehoundin' and Reboundin'?"

Anyway, I know I haven't gotten a raise in awhile, and cheap wine is always welcome, good times or no, so I've got a real winner for ya'll this week: Aleph Cabernet Sauvignon 2002, from Mendoza, Argentina.

I picked this one up on a whim at Schneider's of Capitol Hill last week, from a case stack near the front registers, priced at a mere $3.99. When I asked the sales guy for his opinion, I was informed that it was "great," and had garnered an 89 point score from the Wine Spectator, to boot! Here's what that rag's editor James Molesworth had to say about the Aleph, back in September of 2004:

High-toned berry, vanilla and floral notes are followed by red and black cherry and red currant fruit, with elegant toast and mineral notes as well. Gains flesh and length as it opens, with nice sweet fruit through the finish. Drink now through 2006. Score: 89. 750 cases made. Release Price: $20

Well, regardless of score, this one apparently did not sell as well as it might have, which is why Schneider's got it at such a deal, and is now marketing it now at a fifth of it's release price! After many years in bottle, this wine now exhibits a pretty dusty leather / mushroomy character on the nose, along with violets, raisins, and grapefruit. The black cherry on the pallate still holds over from this Cab's youth, as does a bit of vanilla, but the flesh and sweetness that Molesworth found have mellowed out, leaving it much softer and more mild than it had been upon release. Where it was once vibrant and bright, the Aleph has faded, but in the best possible way, retaining plenty of acid and fruit, and trading power and grip for those strange and wonderful flavors that only come with age.

(Note: Unfortunately, age also brings brittleness. As with many old wines, removing the cork on this one was a bit of a challenge, and it broke in half in the bottle neck, so exercise caution whilst opening.)

Considering the extremely small production run on this wine, I am not surprised that I have not seen it anywhere else, and I don't expect to. Schneider's had about four cases stacked on the floor, and probably has several more in their sizable warehouse. If you eschew the bold fruit and boozy strength of young wines in favor of something a bit more subtle, the Aleph Cab 2002 is an incredible buy for less than a fiver.

Yes, our reviews do have a 'shelf life'. Our ratings represent what we think the quality of the wine will be when at its peak. The drink recommendations we give are aimed are letting the reader now when that peak will be - and we try to be cautious, preferring wines before they begin to slide.

I'm glad you still enjoyed the wine, though from your note, it certainly appears this wines' better days have passed. That, combined with a tough economy and backlogged inventories, is likely why it's being blown out at such a low price.

I reserved a mixed case of the cab and malbec online for store pickup on your advice. keep it coming...

Hey, this is very off-topic.. but I wanted to pass it along.

Google map of all the ethnic/specialty markets/groceries in the D.C. area...

A discussion on Chowhound kicked this off, so I made a map of all the little specialty shops in the area. It's only East Asian and Middle East/Indian/Mediterranean right now, but Euro/Gourmet, Latin/South American and African/Ethiopian might be coming.

(You can view both maps together, by opening one in the same tab as the first, and checking the title of each map in the lower left hand corner.)
the latter map is just budding, but both are incomplete and can use help for anyone who wants to chip in.
Other maps will include Euro/Gourmet, Latin/South American, and African/Ethiopian -- assuming I don't lose interest quick.
----
I think this is a cool idea. I'd never been to Great Wall in Merrifield and was pretty blown away (live bullfrogs?) I wouldn't have checked it out if I hadn't learned that it was on my way to work.
Anyway, it seems worthwhile to flesh out. I'm not on a quest though -- if you think its a good idea, help out. You can do that just by opening the map, putting you address into the map search bar (so that you can find your house), then zoom out and see if any of the shops in your area are missing (or if one of the listed stores has closed.) Leave a message here afterwards.
If this is popular, maybe it can expand to include reviews of places (stock size, prices, special/odd items, etc) and photos.
What do you think?

Wow, hello Mr. Molesworth! Thank you for reading and participating; wouldn't have expected to be on your radar. Again, thank you, but I fear you may have misunderstood me, and I thought I might take a moment to more thoroughly explain my position.

I totally appreciate the idea of a wine's shelf life -- of COURSE wines change, and that is the fun of it. And knowing when a wine is expected to 'peak' is one of the most important things the consumer can know. I applaud you and your contemporaries for providing that info, and thank you as well for your thorough and consistently helpful tasting notes.

While I was being facetious when I called your magazine a 'rag,' as it is obviously well regarded, I was not being so when I asked rhetorically about the declination of score over time. When one embarks to score wines on a precise 50 point scale, I would think that he would consider that a wine might change enough in character to merit a shift of a point or two after a mere couple of months, and maybe even more over several years. When the difference between an 89 and a 90 can mean all the difference to a certain set of consumers, is this not a valid concern? When you say that you rate a wine based on "its peak," and give a four year range in your notes, are we to understand that that wine will remain unchanged throughout that period?

I was not saying that having an 'expiration date' muddies the water of the score, but visa-versa. Whereas having a critic's educated opinion as to when a wine will start to decline is great, I feel that the 100 pt system confuses the matter. Assigning such a specific, concrete number to a product that is in constant flux just strikes me as ludicrous, and more than a little counterproductive to the practice of choosing the proper wine for an occasion. With tasting notes, it is easy to take into consideration the workings of time, and often certain characteristics will remain after years in bottle -- notes are a record of impressions, and their fluidity is accepted as writ. When it comes to scores, the mind (particularly the stat-happy American mind) is not trained that way: Scores are solid, stable, and generally accepted as more important than words. Whereas those traits are well-deserved and accurate in many fields, they simply do not translate to a discussion of wine, which unfortunately leads to misunderstanding, and sometimes, abuse.

But I am sure you hear from cranks like me all the time, so I will not bother you further. Thank you again for the vital service you provide. I hope that I have cleared up any misunderstanding on your part, and beg your pardon if I have caused any further offense.

I picked up my case today - they were out of the malbec so its all cab - and for $3.99 I need to get another case. This is nicely aged and a great drinker. Perfect wine when you don't want to crack a more expensive bottle!