Don't call it a comeback! Chicken wings on the grill, Super Bowl on the TV 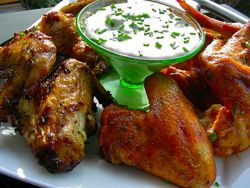 Next week's game has all the makings of being the best Super Bowl since 2002. Both the Saints and Colts have great story lines and last weekend's championship games point to a fantastic match up in the works. (With all the connections to Louisiana, a pot of gumbo and a case of Abita wouldn't be a bad call.)

So what better time to restart the old grilling column? I've been a bit busy lately with beer bar profiles, homebrewing and expanding the family. As a result, I haven't cranked out a grilling column since Oktoberfest. Shameful, I know. But I'm sure everyone has been dutifully grilling throughout the college and NFL seasons, right? Right?? 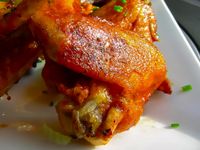 The beauty of grilling chicken wings this time of year is you don't need to spend that much time outside with them. Toss them on, glaze the hot wings a couple times when they're nearly done, and pull 'em off. That's it. I'm a proponent of year-round grilling, but I hate spending time outside during the winter. (Well, winter up here. If I were writing this post back home in Tampa, I'd be outside in shorts. Your winters suck.)

For this post, I did the wings two ways: buffalo style, or hot wings, and jerk. For the jerk, you marinate the wings over night. For the hot wings, you glaze them on the grill and prepare a blue cheese sauce while they cook (but it'll be better if you make it the night before). Most importantly, this is all stuff you can do while drinking beer. I know, I did.

So skip the bars, buy a couple packages of chicken wings and make sure you have propane in the tank (or charcoal in the bag). This is the Super Bowl, so it's time to do it right. And the only way to do it right is to do it on the grill.

(This is the point I usually make a beer recommendation. Not this time. As I mentioned, I've been homebrewing, so I'll be drinking my own during the big game. I will say this: with all the pre-game analysis, festivities and what not, and then the game, Super Bowl Sunday is a marathon, not a sprint. While I'd love to spend the day sucking down Hopslam, the 10 percent beer would lay me out before kickoff. So shoot for something a little lighter, like Oskar Blues' Mama's Little Yella Pils, Abita's Turbodog, or Clipper City's MarzHon. All three are great beers that will treat you right all day long.)

Grilled Jerk and Hot Wings
(makes a lot of wings) 20-25 whole chicken wings (I don't separate the drummette and the wingette. Life's short, give everyone a whole wing.)
1 large 10 oz. bottle of hot sauce (I buy something cheap and relatively mild. In this case, I used Tapatio.)
3 tbs. honey
1/2 stick of butter (room temperature)
Salt and pepper to taste
Vegetable oil 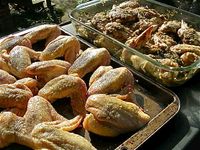 For the blue cheese sauce, add all the ingredients except the chives into the Greek yogurt, taste and adjust the seasoning as necessary. Cover and refrigerate. Scatter the chives on top before you serve.

An hour before you're ready to grill, remove all the chicken from the refrigerator, as well as the butter. Brush the chicken you're using for hot wings with a light coat of oil. Season with salt and pepper. 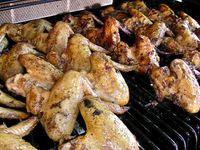 Whether you're using a gas or charcoal grill, set it up for indirect cooking (charcoal: hot spot on one side, cool on another; gas grill: two outer burners on, two inner burners off). When the grill is hot, put all the chicken on and close the cover. Grill the chicken for 30 minutes. Open the lid and flip the chicken. Also, swap the pieces of chicken that are farthest from the heat with the pieces closest to the heat. Close the cover and keep grilling for another 30 minutes.

During this last half hour put the wing sauce together. In a sauce pot, combine the hot sauce, butter and honey. Simmer over medium heat until the ingredients coalesce. After the wings have been on the grill about an hour, start brushing the sauce on the chicken.Close the lid and cook for 5 minutes. Add another coat of the wing sauce and grill for another five minutes.

Pull all the wings off the grill, get the blue cheese sauce out of the fridge and go watch that game.