The Return of Hopslam

Last year, around about this time, I extolled the virtues of a hero. Born in the mystic land of Kalamazoo, forged with grain and honey, and tempered to a fine hoppy edge, this hero came each year at Winter's height, and banished the Demon Cold with balance and grace, and brought great cheer to the peoples. This hero's name was Hopslam. And yea, there was great rejoicing, and more than a little revelry, until he again he disappeared, only to return when he was most needed. Well, he hath returned friends, to beat back the storm and cold... but lo! I fear he doth look a bit less vigorous than when last we met, and oh what a tribute he now demands!

The Hopslam has been one of the most praised beers of the past several years, and you can count me as one of its greatest supporters. This Imperial IPA from Bell's Brewery — flavored with a combination of heavy hops and honey, and weighing in at an explosive 10% abv — is widely considered one of the best spring seasonals and practically flies off the shelf. Having been a bit swamped with personal and work obligations, I kinda lost track of the spinning of the beer world and was thus happily surprised when I saw the fave in a Dupont area market last Wednesday. Thoroughly elated, I picked up a sixer and all but skipped to the register. "Oh, you found the Hopslam," said the elderly cashier with a wink. "Just came out today! That'll be $24.00, plus tax."

Now, I am the first to admit that I spend way more than is sensible on my beer and wine budget, but even for me, $24.00 a six pack is pretty freakin' steep. Sure, Hopslam was never what you would call cheap, but I rarely saw it for more than $20.00 on the shelf last year, and usually it was closer to $15.00. Curiosity overcame frugality; I left nearly $30 poorer and anxiously cracked a bottle as soon as I got home. 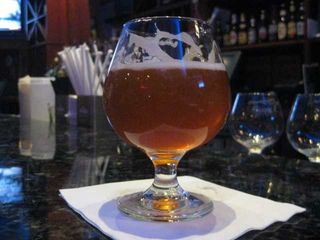 This year's Hopslam pours a hazy golden orange, with a full head and long-lasting lacing. Spicy and bready notes head up the nose, accented with notes of grapefruit, honey, and ginger. Lots of honey and bitter hops lead to a full, citrusy, slightly sour mid-palate. The minute-long finish features an interesting melange of sweet honey and bitter hops, along with an odd, vaguely soapy quality. When sampled on draught, the Hopslam was a) very similar, if a bit sweeter, with more grapefruit on the nose, and b) also a good deal more expensive than it had been last year, selling now for $8.00 per 10 oz snifter.

Don't get me wrong, the Hopslam is still a pretty damned good beer, and the flavors match up pretty well with what they've always been. This year, though, a little something seems to be missing; the beer seems less full and less beautifully balanced than it used to be. I don't know, maybe it's the new pricing that is subconsciously turning me off, or maybe that merciless bitch Time has made me older, and therefore, more jaded and cynical. Any way you cut it, the bloom is off the rose.

Supplies were extra limited this year, so if you want to give it a whirl, better act fast. I have seen the Hopslam for sale at Cairo Liquor, Schneider's of Capitol Hill, One West Dupont Wine and Spirits, and Wagshal's (all in the $20 to $25 range), and you can be pretty sure that area Whole Foods got themselves a healthy supply.

Wow, regardless of how I felt about it, this stuff went fast. Cairo Liquor was out of stock when I swung by today, Chevy Chase Wine and Spirits (one of DC's premier beer outlets) appeared to be out, and Schneider's was down to less than a case. If you still want it, you'd best grab it when you see it!