Basket for stir frying? Nope, but a handy pan for grilling oysters and such 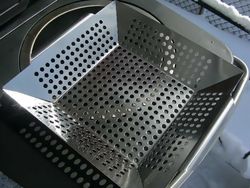 Because I'm into cooking and grilling, I get get a lot of gadgets as gifts. I've received digital thermometer grilling forks, a garlic press shaped like a parrot, cutlery sets, a couple juicers (maybe I'm vitamin deficient), etc.

This past Christmas, my brother and his family added to my collection by giving me a grilling basket ostensibly so I can "stir fry" on the grill. As much as I appreciate the gift, and I do, there's no way I'm going to stir fry in that thing.

The fact is, I can't. It's not built for it. Stir frying involves high heat and sauces, and should only be done in a wok. It's actually a rather nuanced form of cooking. The perforated grilling basket can't hold liquid and won't conduct heat as evenly as a wok. It's simply the wrong tool for the job. (That said, I have stuck a wok on the side burner of my gas grill to do a little stir frying. That works pretty well, especially if you have an electric stove in your house. The side burner can get the wok much hotter and the inevitable smoke that comes from stir frying drifts away in the breeze, rather than choking your kitchen.)

But as a tool to cook small and delicate items on the grill, the basket is an excellent tool. Ever since I watched Tony Bourdain visit a restaurant in Spain that uses wire basket pans to cook over hot coals, I've been thinking about applying this technique to my grilling. The grilling basket is a good start.

Admittedly, I got lucky with this gift. So much of the grilling accoutrement out there ranges between useless and complete crap. Top of the pile is the grilling fork. No tool is as ubiquitous or as useless as the grilling fork. If you're thinking about buying one, don't. If you own one, get rid of it, or find another use for it (I use mine to pierce potatoes). There's not a single vegetable or piece of meat that needs to be speared. And yet, everyone wants to stab their damn steak. Stop it. Piercing meat will do nothing more than drain it of its juice (read: flavor). Other useless items include fish-shaped grilling baskets, special basting brushes (cheap pastry brushes often work better), beer-can chicken stands (beer cans work fine), fish turners (use a spatula), and obscene hot dog stands.

As I mentioned in a post a while back, the one tool everyone needs for the grill is a good pair of tongs. Beyond that, a spatula, grill brush (for cleaning), grill cover, skewers and a thermometer are very handy, but you can live without them, depending on what you like to cook. 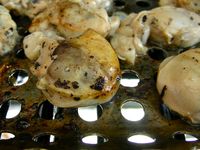 You can also live without the stir fry basket, but at least it can be reimagined. The first thing that came to mind was oysters. Unless you cook them in the shell, which I've done, you can't cook oysters on the grill (the little buggers slip right through the grates). But with the basket, I can quickly grill the oysters directly over the heat, imparting a delicate smokey flavor to the bivalves.

The basket will also be useful for grilling certain cuts of delicate fish. Typically, I lay down a perforated sheet of oiled aluminum foil to make sure the filet doesn't stick to the grate or break up and fall though the slender bars. The grill basket can serve as a pan that would allow the fish to grill, while maintaining its structure.

As for vegetables, the basket will grill whole cherry and other small tomatoes quite nicely. In fact, any small piece of fruit of vegetable that you don't want to or can't skewer (pearl onions?) is ideal for the basket.

So as it turns out, the basket was a great gift with a number of uses. It's just that the one use it will never have is stir frying. 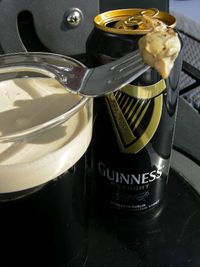 To demonstrate the usefulness of the basket, I made a grilled oyster and tomato salad with shallots. Because I'm grilling oysters, the natural beer to pair with the dish is a stout. And in this case, the king of stouts: Guinness. I love craft beer and generally have nothing but bad things to say about the macro brewers, but Guinness stout is the stout by which all other stouts are (and should be) measured. Yes, it's owned by one of the largest beverage companies in the world (Diageo), but the folks back at the Guinness brewery make a phenomenal beer. The craft brewing community has produced a lot of interesting stout variations (imperial, chicory, chocolate, oatmeal, milk, and even oyster), but when it comes to a straight forward traditional stout, there is none better than Guinness.

And when you're pairing a beer with as delicate an ingredient as oysters, that's what you want. The other stout flavors, and the richness of imperial stouts, would overwhelm the flavor of the grilled oysters and salad. Besides, oysters and stout is one of the oldest food and beer pairings. There's a reason for that: it's good. The creamy, dry, faintly sour flavors of a Guinness stout are a wonderful counter to the sweet, briny (and when grilled), faintly smokey flavors of grilled oysters. It's a match made in Irish heaven.

1/2 pint of fresh oysters
2 shallots
1 pint of cherry tomatoes
1 bunch of arugula
1 ounce of fresh lime juice (about a half of a lime)
3 tbs. creole or stone ground mustard
1.5 tbs. of honey
1 tbs. of red wine or cider vinegar
Olive oil
Salt and black pepper to taste 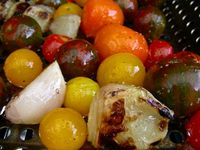 Prepare the dressing by whisking together the mustard, honey and vinegar. Taste and adjust as necessary.

For this recipe, you're going to cook directly over the heat. So once the grill is ready, place the basket on the grates over the burners, or coals, and put the shallots in. Grill the shallots for 10 minutes, turning occasionally, then add the tomatoes. Grill for another five minutes, or until the tomatoes begin to burst. Remove from the basket, roughly chop the shallots and set aside.

Take the container of oysters out of the refrigerator and drain off the liquor. Rise the oysters gently, shake dry and place in a bowl. Coat the oysters with olive oil, half the lime juice and a small pinch of salt and pepper. 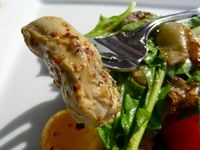 This dish looks amazing. I will have to attempt to reproduce it! Thanks for the post.