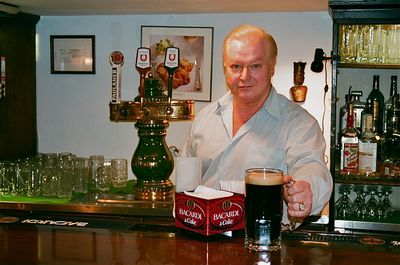 On warm, sunny days, it's nearly impossible to walk past the corner of 4th and Massachusetts at Stanton Park. There you will find the outdoor patio of Café Berlin packed with people pulling back perspiring liters of German lager the size of small children. I used to walk by every afternoon on my way home from work. Often, I'd end up calling my wife to ask her to meet me there. I never got an argument.

I love all the new beer bars popping up around town. And it's fantastic that so many bars and restaurants are now serving great American craft beers. But before this latest American revolution took hold in D.C., the Germans were already entrenched.

So for this best beer bar post, rather than profiling one best beer bar, I'm shining the light on all three of D.C.'s German beer bars. It turns out they serve great German beer before and after Oktoberfest. Go figure.

If beer had a family tree, one of its grandparents was German. The country gave us lager beers, which gave us pilsner, the kingfish of all beers. But I'm not going to hold garbage beers like Budweiser against the Germans. No, not when they've given us hefeweizens, doppelbocks, dunkels, maibocks and Kölsch style beers. Their beer purity law, the Reinheitsgebot, gave beer the structure we know today by mandating that German brewers could only use water, barley and hops (yeast was added later when they figured out what it was). And let's face it, Oktoberfest is the greatest beer festival in the world. Hell, the annual event even has its own beer style.

Over at ChurchKey, Beer Director Greg Engert lists the type of glass each of his 555 beers should be poured in. Over at Café Mozart, Café Berlin and Old Europe, you're choices are steins, pints and tall glasses for hefeweizen. They always have been and they always will be, and that's great.

Sure their selection is much smaller than Pizzeria Paradiso's, and they're kitschier (well, mostly Old Europe) than The Black Squirrel, but they're just as significant when it comes to the District's beer scene. Engert made an interesting point during his recent interview on the Kojo Nnamdi Show. He said the rise in craft beer is due, in part, to people's desire to really enjoy the experience of drinking that beer.

I couldn't agree more, and where you enjoy that beer can have a real influence on the experience. While I pick up the occasional six pack of German beer (especially when I can get out to the German Gourmet in Falls Church), there's nothing like having a few Spatens at the bar in Café Mozart or seeing an old woman in a dirndl heft glass steins across the dining room at Old Europe. Toss in a plate of sausages and kraut, and I'm practically in Bonn.

Like I said, these places can come off as a bit kitschy. But according to the missus, who spent time studying in Bavaria, they're not completely inauthentic. Café Berlin is the most typically German of the three (in her opinion) followed by Old Europe and Café Mozart (which apparently isn't particularly authentic, but neither is Lauriol Plaza and people seem to like that place). If you want the German experience with your German beer -- and you do -- then these restaurants have you covered.

(Before someone complains that I excluded the Saloon, let me explain why I didn't include it in the profile: it's not a German bar or restaurant. It has a respectable number of German beers on draught and by the bottle, but it is not particularly German in any other way, though all the rules would make you think otherwise. More importantly, the missus gave it the thumbs down on German authenticity.)

Let's talk about the beer. I get the sense that the great German lagers are getting lost in all the hoopla surrounding craft beer and the Belgium invasion (which I've played a part in). Aside from Oktoberfest, the last time anyone paid much attention to the German brewers was when Schneider Weisse and Brooklyn Brewing collaborated on a couple beers. So let's be clear: Germany makes some of the very best beer in the world. I appreciate what's going on in Italy, Denmark and Finland, but these countries will never have the impact on beer that Germany has had. And for as much as I like the various styles of beers that are coming out of the rest of Europe, I'll take an amber hued Paulaner Salvator or Weihenstephaner hefeweizen (hold the fruit, thanks) over any of them any day.

This isn't about competition, though. This is about celebrating German beer and our trio of German establishments.

Take Café Mozart, with its front deli selling traditional German meats and sweets. The bar, sandwiched between the deli and back dining room, is everything you want in a drinking establishment. The dimly lit room with low ceilings has a smattering of tables and a line of stools along the bar. Grab a seat and ask bartender Greg Brooks (pictured above) for a liter of Spaten Optimator. Hang out long enough and you may even catch a little live accordion music (that's German, people).

Then there's Old Europe, located down the street from the National Cathedral and up the street from a strip club, the German restaurant seems a little out of place. From the aging antlers and artwork along the walls, to the staff in dirndls and lederhosen, the place looks like it was built for Epcot. But my wife assures me that as over the top as Old Europe seems, it would fit right in back in Bavaria. Admittedly, the décor does start to work when the Bitburgers and wurst hit the table. Besides, after a couple liters of lager, who cares about what's on the walls? 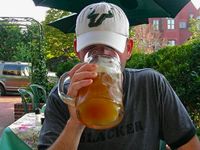 And then there's Café Berlin. Ah, Café Berlin. I have spent many afternoons that turned into evenings at the German restaurant on Capitol Hill. The Lagerheads over at the City Paper argue that D.C. won't have a beer garden until the Bier Garten Haus opens next month on H Street. Technically, they're right, but Café Berlin's outdoor patio isn't a bad substitute. The restaurant is practically designed to keep you outside. The dining room is nice, but small. So too is the bar. The one time I sat there I kept getting looks from the staff wondering why I wasn't outside (I knew this because they kept asking me if I'd like to move outside). They were right to be confused; Café Berlin's patio is one of the best spots to enjoy a beer in D.C. And when you consider the beer you're drinking, it makes the experience that much better.

Every fall when Oktoberfest rolls around, we get really pumped up to consume all things German. By mid-October, we move on. That's a shame, because we're fortunate to have three stellar watering holes where we can quaff a liter or two of Deutschland's finest all year long.

Hopefully opening soon to add to that list will be Biergarten Haus on H Street NE. They are going to have a good sized beer garden out back and what looks like a promising menu.

I have not been to any of these German Bars yet. I cannot wait to try them all out and let you know what I think. Great post, I will have to tell our residents about these .

I recommend ordering from the dinner room menu (rather than the bar menu) at Cafe Mozart. The food is fantastic German faire.

Love the USF hat! Which means you left Mr Dunderback's off the list ;)

Oh, I've talked about Mr. Dunderbak's before. In fact, I did so in a profile about Tampa's own Cigar City Brewing:

I love beer a lot . So wonderful to drink beer after a hard working day ! I love beer so much
Thanks for the information! I've been meaning to start this process myself so this is a big help.