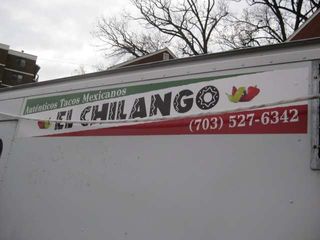 Over the past couple years, food trucks have hit DC in a big way -- a veritable convoy of the suckers have descended, bringing with them a bit of west coast charm hitherto unseen. Cuisines and attitude vary, from the over-the-top antics of the curry slinging Fojol Brothers, to the constantly Twittering bakers @CurbsideCupcakes. Several rock the social media like nobody's business, whereas others fly well below the radar.

El Chilango is definitely one of the quieter, less exposed trucks on the block. I had never seen nor heard of it until one cold December afternoon, when my girlfriend came home bearing tacos (that's why I love her!). She said she'd gotten them from a truck on Barton Street, and that the nice man cooking them even invited her into the truck, as it was rather blustery outside. Since then we have gone back several times, and have sampled practically everything they offer -- which is tacos. Just tacos. But, oh, what tacos! 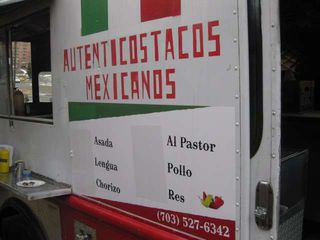 Jesús, the truck's lively proprietor, serves up six different kinds of tacos: Lengua (beef tongue), Chorizo, Asada (grilled steak), Pollo (chicken), Al Pastor (marinated pork), and Res (beef), each available for $2.00 apiece. All come dressed in the traditional Mexican style, topped with plenty of cilantro and onion, double wrapped in crisp re-fried tortillas. Cucumber, radishes, and salsas verde and rojo are thrown in the deal on the house -- it really turns out to be quite a bit of food for the modest price tag.

Though the Pollo is a little dull (as might be expected), and the Asada only so-so, the rest of Jesús' offerings are out of this world. The Lengua is only slightly beefy, but has a wonderful, almost fluffy texture -- this taco would be a great intro for someone who 'doesn't like tongue,' so buy it for a friend, and don't tell him what it is. The Chorizo has a good amount of spice, but isn't offensively salty, which can 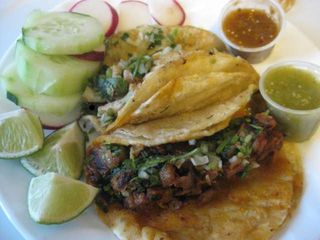 often be the case with cheap Mexican sausage. Though I am not 100% sure what the difference is between the Asada and the Res, I can say that the latter has an outstanding texture, both crunchy and fatty at the same time, and a great blackened flavor.

The Al Pastor, though, is my hands-down favorite. This traditional Mexico City dish is made from adobo and chili marinated pork, which is cooked rotisserie-style with pineapple. I think he might cheat on the rotisserie part, but the pork itself has just the right level of fat content, and the smokey adobo and pineapple fruit come through nicely. With a bit of green chili sauce splashed on the top, the sweet, spicy, and smokey flavors meld into something truly beautiful.

When you visit, don't miss Chilango's homemade horchata. A combination of honey, rice milk, and spices, horchata has the consistency of skim milk, but is obviously much sweeter, and bears a faint flavor of cinnamon. I had ordered a Jarritos, but they were out, so when I was handed a cup of this opaque white 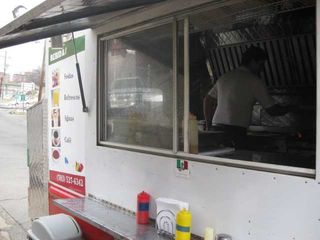 stuff instead, I was very skeptical, but damned if it didn't make a perfect accompaniment to my tacos! Though I was disappointed to miss out on my favorite pineapple-flavored soda, the horchata's mellow sweetness made a soothing counterpoint to my spicy entree.

What El Chilango lacks in variety, it more than makes up for in quality. Even at some of your more expensive Mexican joints, the tortillas can be soaked and flabby, and the meat bland and over salted. I love the double tortilla at El Chilango, which is always crisp and firm, and the fillings are well above the curve. These are some of the best tacos I've had in the area, and when you throw in the fixins', it ain't much more expensive than Taco Bell.

El Chilango is normally parked on N. 14th St, between Quinn and Queen St, right off of Route 50, between the hours of 1:30 and 10:30. In the springtime, Jesús will likely shift the operation to Barton Street, between Fairfax Drive and N. 11th St.

do you know if he's open on weekends? or is this weekday only?

Last time I visited, Kevin, it was on a Sunday, and he was parked at the Barton Street location. When I asked when he worked, Jesus did say everyday, so you should be able to find him at one location or the other on weekends. Good luck, and I hope you enjoy!

No veggie options? Bummer. Guess that wouldn't be "authentic."

I went by tonight. The al carbon was delicious and the horchata was very tasty.

They said they're open every day ("Monday through Sunday"). Last night and tonight they were at the 14th Street location. They're very friendly! I'll definitely be back.

Ya, so no veggie or fish versions? Disappointing, but I will definitely recommend this to our residents.