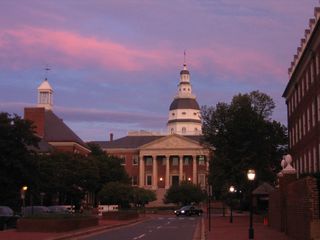 As many of you residents of Maryland are aware, the Old Line State takes a hard line when it comes to shipping wine. Lots of states have laws limiting the shipment of liquor to a private residences; many limit the amount one may receive in a year, some only permit intrastate shipment, and others levy a tax. At my old retail job, we often shipped to some of the more, erm, "questionable states," and had a pretty good success rate. Maryland, though, was on a very short list of no-no states, as their laws are downright draconian. Not only does the state forbid liquor shipping from out-of-state, but in-state liquor shipment of any kind is also verboten. And guess what? If you're caught, it's a FELONY, even for the recipient!

Sound a bit outmoded? Unjust? Unconstitutional, even? A lot of folks think so, and have pushed for legislation to have Maryland join the thirty-some-odd states that treat their citizens like responsible adults. In both '08 and '09 bills have crossed the congressional table, but thanks to tired old morals and some stiff opposition from the wholesaler lobby (which has much to lose, and lots of money to throw around) each has been summarily dispatched.

But grassroots support has been building, with several groups popping up fighting for the rights of MD drinkers, most notably the Marylanders for Better Beer and Wine Laws. Founded in 2005, the MBBWL organizes meet-ups advocates on behalf of Maryland producers and consumers. Thanks to their work and that of some allies in the government, it looks as if another bill might make it to the floor this session. But they need your help! The nice thing about issues like this is that an single individual can have a real impact. So what can you do?

On the scale of injustices in the world, this is, of course, a minor one. But if you are resident of DC or Virginia, where laws are more progressive, it will only take you a couple seconds to do your neighbors to the north a solid. And Marylanders, I know your state has as many problems as the next, but this is a inequity with a realizable solution just over the horizon. Not only do these laws hurt consumers and support big business, but they are also a huge detriment to your state's growing winemaking industry. Click those links and get yourself empowered!

Thanks for posting the links. I'm so jealous of my VA neighbors who can join wine clubs. Hopefully we'll get the same privileges in 2010!