A Restaurant By Any Other Name Is Not a Gastropub 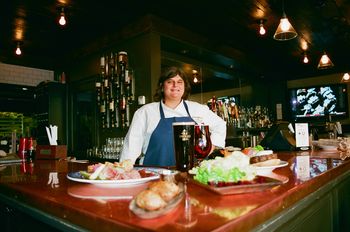 This Wiktionary definition is the best I could find for gastropub, but it's illustrative enough. A gastropub is generally understood to be a public house (read: bar) that serves equally high-quality food and beer. In other words, a place you're just as likely to go for a few great beers as a nice meal. The concept hasn't been around all that long, but it has certainly found traction here in D.C.

Well the term has found traction, the establishment of actual gastropubs, not so much. Jamie Leeds (above) is the co-owner and executive chef of one of D.C.'s two gastropubs, Commonwealth. Granville Moore's on H Street, is the other. I would be just as inclined to visit either for a few quality ales as I would their upscale dishes.

Yet, a Google search of the terms "gastropubs" and "D.C." pulls up a number of restaurants that either refer to themselves as gastropubs, or are referred to as gastropubs. Againn is clearly a restaurant. So is Brasserie Beck. Both have good beer selections (Beck's selection of Belgian beers is excellent, in fact), but the small bar areas, large dining rooms, showcase kitchens and raw bars (is that a new trend, too?) indicate that these places were designed to be restaurants, not drinking establishments. Rustico, which was named D.C.'s best gastropub in 2008 by the City Paper, could be a gastropub, but Beer Director Greg Engert and the management of the Neighborhood Restaurant Group, which owns Rustico, are very clear about the fact that it is very much a restaurant. 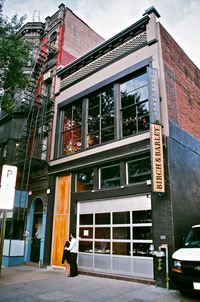 This also goes for the NRG's beer palace, ChurchKey. One floor below is Birch & Barley, ChurchKey's sister establishment. Executive Chef Kyle Bailey offers several dishes that could be served in any white tablecloth dining room in the District, including pan-roasted skate and braised pork cheeks. But because burgers and flatbreads are the focus up stairs, ChurchKey is not a gastropub (though, the deviled duck eggs with duck pancetta and sweetbread dishes nearly do the trick). And though Birch & Barley diners have access to all of ChurchKey's 555 beers, the six seats at the bar are an excellent indication that this is a place geared toward diners, not drinkers. Fortunately, no one at NRG refers to either establishment as a gastropub, so there's no issue here.

Unfortunately, that hasn't stopped Urbanspoon. The restaurant review Web site lists ChurchKey and Birch & Barley as gastropubs. It also lists, Againn, H Street Country Club (you know, the place with the mini golf) and Scion in Dupont Circle as gastropubs.

Therein lies the problem; the more people misuse the term, the less meaning it will have. As Leeds puts it, the term gastropub is becoming the new bistro. Beer is trendy now, and the gastropub concept is closely aligned with it. And like the term bistro, gastropub is the exotic new concept. It's British, and right now things that are British are nearly as trendy as beer. So why call your restaurant a restaurant, when you could call it a gastropub?

On the other hand, it's fair to ask what difference does it make what a restaurant calls itself. Without a true definition, gastropub is more of an adjective than a noun, so it describes establishments rather than defines them.

The thing is, I like gastropubs. Back in 2004, my friends Emma and Tom turned me on to gastropubs during a trip to London. They lived around the corner from The Junction Tavern, a beautiful old pub in London's Kentish Town neighborhood. The Junction specializes in real ales from local breweries and offers an upscale seasonal menu. It's a model gastropub, and a fantastic one at that. Ever since then, I've been very interested (maybe a little giddy) when a new one opens up in D.C. -- and disappointed when it turns out to be just another restaurant.

To gain some clarity on the subject of gastropubs, I e-mailed David Bulgar, a reviewer for the British pub review Website, Fancyapint. David has visited his fair share of gastropubs.

So David, what's a gastropub?

"I think most English drinkers would define a gastropub as a pub that focuses on restaurant quality dining, often serving modern British cuisine. Some gastropubs manage to operate as a good place to simply go for a pint as well as food, while others kill the drinking experience by looking and feeling to much like a restaurant, not a pub."

Maybe Brasserie Beck does fit the definition. But as he said, the establishment should be as much a pub as a restaurant.

When Commonwealth opened in 2008, D.C. finally had its own gastropub. The decor is a nod to the concept's British roots (though not necessary for a gastropub), but more importantly, the beer list is solid, with a respectable mix of British and American craft beers on draft and in the bottle, as well as pair of handpumps mounted on the bar. Keep in mind, Commonwealth came along a year and a half before ChurchKey and its five handpumps opened its doors. Like the Junction, the food coming out of the kitchen struck the right balance between traditional pub fare and smart, upscale cuisine. Given all the Irish bars we have around D.C., I know not to expect anything more interesting than the perfunctory shepherd's pie or fish and chips, and an ice-cold Smithwicks. Leeds, however, offers a menu of local, organic, sustainable dishes and pints of real ale.

And it's because of the attention Leeds and her business partner Sandy Lewis pay to the beer program that makes Commonwealth as much a drinking destination as a dining spot.

As David said, this is what separates gastropubs from restaurants.

A gastropub, he said, is "first and foremost a pub. It will have all the features of a pub, i.e. a bar, an area for simply drinking, without the need to order food. An English drinker will be able to distinguish between a bar, a pub and a restaurant a mile off. Pubs are generally older, serve a range of ales and lagers on tap, and have simple wooden chairs and tables, maybe a pool table and or dart board, and sell crisps and nuts as snacks; bars tend to be newer buildings, the often do not serve draught ale, and commonly only serve bottled lagers, they will have more modern furnishings, and would not have darts, pool, the crisps and nuts etc, in their place will be a cocktail menu and louder music. A gastro pub is distinctive because it will look more like a dining room than a drinking room, with tables set with menus, wine glasses, etc."

Walk into Commonwealth or Granville Moore and the bar is the very first thing you see. At Againn and Beck, the first thing you encounter is the hostess stand, followed by the raw bars.

Now that the gastropub trend is gaining steam in D.C., in name at least, I went back to Commonwealth to talk to Leeds. Commonwealth was envisioned as a gastropub that would have a robust beer program, casual, but elevated cuisine, and ultimately a place that would be responsive to its neighborhood clientele. Leeds said Lewis developed the beer program, while the menu was her design. Wanting to do something besides seafood (Leeds and Lewis also own Hank's Oyster Bar), Leeds decided a gastropub would give her the chance.

To be honest, even Commonwealth wouldn't fit David's strict definition of a gastropub. In Britain, he said, most gastropubs are old pubs that decided to upgrade their menus. Well, London has a lot more old pubs than we do, so unless Leeds had taken over the kitchen at the old Mr. Eagan's, Commonwealth and Granville Moore are the closest we're going to get to true gastropubs.

Although beer was always a focus of Commonwealth, Leeds said she's surprised that her gastropub has become such a destination for area beer enthusiasts. Leeds said Commonwealth remains focused on catering to its Columbia Heights neighborhood, but its beer sales are "through the roof" thanks to all the regional traffic the bar gets.

Now, compare Commonwealth to Againn. I don't mean to pick on the place, but it's the latest restaurant to call itself a gastropub. Its beer selection is fairly large, but it's heavy on the familiars (Harp, Stella, Dogfish Head, Heineken), and has several multiples from a few breweries. Mind you, it's great that they carry five or six different beers from Founders and Brewdog, but it also shows a laziness or ignorance about beer. Rather than taking the time to select a few beers from a variety of breweries, Againn has padded its beer list by selecting many beers from a few breweries. Also, the staff is either too new or too indifferent to know much about the beer list. If you're going to run a gastropub, the staff should be knowledgeable about the beer. Situated between the raw bar and the dining room, Againn's bar seems like most restaurant bars: a place to have a drink while you're waiting on your table. It just doesn't feel like a place you want to spend an afternoon or evening drinking.

Does this mean Againn is a bad place? No, it just means that it's a restaurant, not a gastropub. In fact, it has all the makings of being a good restaurant, and it doesn't have to call itself a gastropub to achieve that goal.

So if I want to go out for a nice meal, I may go to Againn. If I want to try a few quality beers, I may head to ChurchKey. But if I want both, I'll go to Commonwealth or Granville Moore's.

2 cheers to that. A gastropub fills that special niche and it's a shame that establishments try to capitalize on that. It's simple - assuming the requisite beer and food quality - if your dining room is anywhere near the size of your bar, a gastropub you have not. You have to be considered a pub, then you can start looking to be considered a gastropub. If Hank Dietle's Cold Beer started serving food from Addies, then you might have a gastropub in Rockville!