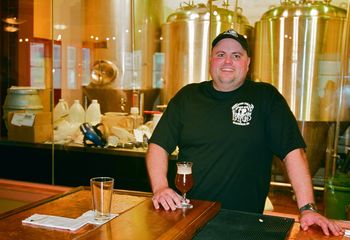 There's been a changing of the brewing guard in Hyattsville.

Charles Noll, Franklin's first and only brewer, has returned to upstate New York. In his place, owner Mike Franklin has hired Mike Roy, a New Hampshire native who was brewing and bottling at a Boston area brewpub chain.

Understandably, the switch caused some concern among Franklin's regulars. It caused a little concern for me. After all, I did just name them a Best Beer Bar. That means something, folks. Sure, Franklin's has also been touted by The Washington Post and the Washingtonian, but it's the seal of approval from your favorite blog that carries the weight around here. Charles was a talented brewer who built a loyal following and put the brewpub on local beer geeks' maps.

So how does Mike Roy follow that? By building on Charles' success and putting his own signature on the brewpub.

Although Franklin's is a favorite among local beer enthusiasts, the restaurant side of the operation is the money maker. Given the rise of craft beer and the notoriety Franklin's has gained, owner Mike Franklin sees an opportunity to improve the brewpub's brewing operation, a lot.

When Mike hired Mike (I know, this can get confusing), the owner told the brewer that if nothing else he expected him to maintain the popularity of the beer program. Ideally, though, both Mikes want Franklin's to be among the premier craft beer spots in the Baltimore-Washington area.

Based on the beers Mike Roy has produced in his short time at Franklin's, the new guy just might do it.

(Quick aside. During the transition from Charles to Mike, the production of beer dropped a bit. As Mike Roy gets his new lineup of beers brewed, Mike Franklin put regional craft brewers on tap, including Heavy Seas, Troegs and Dogfish Head. He could've cut back on the number of beers available or put something cheaper on draft, but he didn't. That's worth noting.)

Out of the gate, Mike Roy is giving local beer geeks exactly what the want: hops and Belgian-style beers. Big, hoppy beers were a signature of his predecessor, and they will remain a staple of the Franklin's lineup, but they won't dominate the draught list as they did. Even Mike's first hoppy beer wasn't an IPA. Instead, Mike led with his hopped Scotch-style ale, Hop Zen. Scotch ales are traditionally a favorite of the malt-head set, thanks to their sweet, rich character, but Mike adds just enough hops to not only balance the malt, but give the beer a pronounced bitterness. It's a good beer.

In a couple weeks, the Hop Zen will be followed by a double IPA he's calling Hop Madness. Here again, Mike goes a little nontraditional. Most double IPAs follow the recent craft beer trend of big alcohol bombs (not that I'm complaining), ranging anywhere from 7 percent A.B.V. (Hair of the Dog's Blue Dot) to 18 percent (Dogfish Head's 120 Minute IPA), with most imperial IPAs pushing double digit A.B.V.s. So where does Mike's Hop Madness come in? At about 8 percent. As breweries continue to wage Cold War-like campaigns to make bigger, badder beers (See BrewDog v. Schorschbraeu), Mike is rolling out a double IPA his customers can quaff a couple of without  falling off their stools.

During our interview, Mike gave me a sneak peak of the double (yeah, it's a good gig). While the beer is still a couple weeks from finishing, the flavors were all there. The bitter Columbus hops were braced with a dark, caramel malt, and the Simcoe buds gave the beer a beautiful citrus, hoppy nose and taste. It's going to be a good beer.

In addition to the hoppy beers, Mike has brewed a couple Belgian-style ales, Golden Opportunity and Dubbel Vision. If anything, this is the style Mike plans to use to make his name. Golden Opportunity is a 6.5 percent Belgian-style golden ale that's a little sweet and fruity, with the tell-tale clove notes and enough carbonation to give the beer some bite. Dubbel Vision, a Belgian-style dubbel, is richer than the golden ale, with a slightly molasses-like character, but only bit higher in alcohol 6.8 percent A.B.V. Of the five beers Mike has on draught now (there's also a red ale, dry stout and a porter) these two Belgian-style ales are his best. (If you're keeping score, Mike has made a golden ale and a dubbel. So yes, a Belgian-style triple is on the way. One day, that triple might be available by the bottle in Franklin's General Store.)

Mike also plans to tinker with Franklin's standards: the Twisted Turtle Pale Ale, the Bombshell Blonde, the Sierra Madre Pale Ale, and the Private IPA. It's not yet clear how different these beers will be, but Mike says that when he's done, only the names will be the same.

Belgian yeast strains and hoppy Scotch ales aren't the only things Mike brings to Franklin's. He's also started a blog to keep customers informed about the beers on tap and what's coming up. It's part of his plans to interact with his new regulars, so they can stay in the loop on what he's brewing and he can find out what's working for them and what's not.

Mike says he likes feedback and enjoys interacting with his customers. I might chalk this up to a new employee saying the right thing about his customers, but Mike is a gregarious guy. I stopped by Franklin's to do a quick interview, but we ended up talking for two hours, including a good 30 minutes on yeast strains, hops and beer brewing software. When we were done, he waded into the crowd waiting for him at the bar.

During our conversation, we also covered how he got from Boston to Hyattsville. In short, Mike's previous job at the brewpub chain Beer Works wasn't the best situation and Franklin's gave him the opportunity to take over the brewing operation of a thriving business.

He actually cut his teeth at the do-it-yourself brewery, IncrediBREW. By guiding novice brewers through the brewing process, Mike ended up cranking out dozens of beers a week and learning a lot about raw materials, yeast strains and the brewing process.

Now he's in a situation where he can use his 10 years of brewing experience to make a good beer operation great. And as head brewer, it's his vision that will take the brewpub where he and Mike Franklin want it to go.

"The day that I rest on what I did in the past is the day I need to get out of this industry."

Mike is great--not only does he know everything about brewing beer, but he loves to share his knowledge!!

The beers are great, and I predict great things for Mike and Franklin's to come.