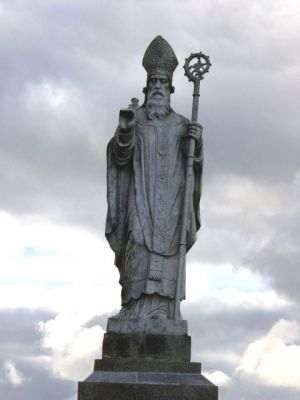 So when Saint Patrick was ministering to the druids and such of Northern Ireland in the 5th century AD, do you think he had any inkling as to what people would be doing in his name 1500 years down the line? History and hagiography agree, the man himself was a bit of a hardass, more into fasting and prayer than, say, drinking copious amounts of crappy green beer. On top of that, did you know he is more traditionally associated with the color blue than green?

Calling a spade a spade, I think its fair to say the whole thing is a farce. Everyone knows the celebration these days has nothing to with a long dead bishop... but it needn't be only about Car Bombs, shamrocks, and silly green hats. Celebrate the great nation's history and get a buzz; drink some whiskey!

Ireland has a fabulously long history of distilling, dating back over a millennium! Whiskey making was once a sort of national pastime, with thousands of stills, both sanctioned and illegal, running full-time throughout the country. Unfortunately, economics and international competition were not good to the Irish distillers, such that today a mere three distilleries remain. Because of this, seeing a new label is rare, so the fact that St. Pat's 2010 brings us two new brands is downright inconceivable! 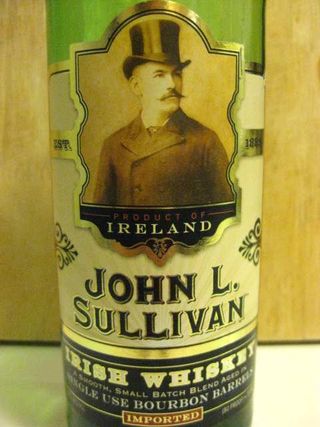 This guy has been on the market for a few months now, and I am afraid the WaPo beat me to the punch. But no matter, it's still a pretty damned good whiskey. JLS is made at Cooley Distillery, the last Irish-owned distillery in the country, which already has some renown for its Connemara and Tyrconnell lines. The spirit -- named after the turn-of-the-century sportsman, and America's first millionaire athlete -- is double distilled in pot stills, then aged in single-use bourbon barrels. This unusual last step adds a depth of color unusual to the species, yielding a pretty, pale gold. Lots of vanilla, some peach, and a hint of allspice on the nose. JLS is a little more oily than most Irish on the front, with the flavor of malted brown sugar, proceeding to a rather smooth, rye-accented finish. If Jameson or Bushmill's is your usual dram, you will definitely notice the difference, but may very well enjoy its more forward "American" personality.

JLS is available at several local stores including Schneider's, Connecticut Ave Wine and Spirits, Ace Beverage, Dixie Liquor, and Cleveland Park Wine and Spirits, for in the neighborhood of $24 / 750ml bottle. I've also seen it around at several area bars in both DC and Virginia, including Cafe Saint-Ex, Marvin, O'Sullivans, The Passenger, and Againn. This new brand is actually quite old, and one of the more popular in its homeland. Paddy was once the flagship brand of the Cork Distilleries Company, which named this, their first attempt at a bottled spirit, after their best salesman, Paddy Flaherty. Paddy has a reputation for being one of the softest, smoothest whiskeys produced in Ireland, a country already known for the easy goin' stuff. The spirit pours a dark burnished yellow, like an older Chardonnay. The nose is quite malty, with a floral note, some melon, and a touch of sweet vanilla. More malt meets you on the attack, along with lots of banana, proceeding to a soft, oak-dominated finish. Being so mild, fruity, and light, this is almost the perfect intro whiskey for your novice friends; still, it is definitely complicated enough to give the connoisseur something to ponder.

Though I remember Paddy fondly from my study abroad period in Dublin, the brand has never really been marketed in the US, so I was shocked when I saw it at The Gibson the other day. I know that they have a good supply, and that Potomac Wine and Spirits nabbed a couple cases, which they are selling off at $31.99 / 1 Liter bottle. Supposedly, the distributor (RNDC) brought in about 70 cases to test the market, so there has got to be more out there somewhere. Let us know in the comments section if you track it down. If you find Paddy to your liking, let your favorite bars and retailers know, and hopefully they will put some pressure on RNDC to make it a regular item.