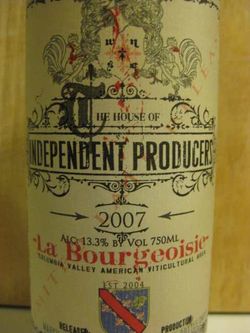 Confession: I sometimes buy wines because I like the label. Not 'label' in the sense of the producer, but the actual paper on the front of the bottle. I know, I should know better, but some are so very, very shiny! Usually the actual wine is just kinda 'meh,' and sometimes I end up with a (well deserved) polished turd. Every once in awhile, though, the method yields a winner.

Wandering around Wagshal's the other day, this guy pictured at left jumped out from amongst the domestic Merlots. Look at that label! Its like a gothic parody of an old school Bordeaux bottle, complete with blood vomiting roosters, for chrissakes -- If Tim Burton designed a wine label, this is what it would look like. While nowhere on the label does it actually say who makes it, the back sports a compelling mission statement:

To capture terrior in its most raw form and to preserve the integrity of the wine world by rebelling against the 100 point rating system. A wine of sustainable and environmentally friendly farming. No advertising.

Below this, in bold black and red, a call to arms: It took a surprising amount of research to figure out who actually makes this stuff. Independent Producers appears to be the pet project of Christophe Hedges, Sales & Marketing head of Washington State's biggest winemaker, Hedges Family Estate. About five years ago, HFE stopped sending their wines to the big magazines for review, rightfully asserting (in this writer's opinion) that the assignment of numbers to wine is both absurd and detrimental. Christophe, a self described 'hipster,' and former score junkie, is very vocal on the subject on the Netterwebs: check out his delightfully bizarre Xtranormal video on the subject here (careful, it is frakkin' NSFW). This brand is the culmination of his philosophy, and is unabashed in its message.

In addition to the heretical appeal, these wines are also pretty drinkable, both displaying those cold-climate characteristics that make Washington State wines so appealing. The Merlot is mouth filling and round, with lots of chocolate and raspberries on the nose, and a dark and dirty, dry, smooth-tannined finish. The Chardonnay is nice and steely, with subtle notes of pineapple and pear; though a little low in acid for my taste, it made a fine compliment to my dinner salad with balsamic and oil. Anyhow, I give them both a solid 92...

I am pretty sure these wines are new to the area, so it might be some time before they are commonly available. As I said, I got mine from Wagshal's, and I will update here as I spot them around town. If you have a good relationship with your retailer, tell him to contact Roanoke Valley Wine Company, who I believe represents the brand throughout the region. And if you try them and like them, tell a friend, as the ScoREVOLuTION will not be advertised.

heeeheeee, I don't drink at all, but I do enjoy wondering around in wine shops looking at the labels :-). Thought I was a bit weird, but now don't feel that "bad" anymore :-)

Picked up the Merlot at Red, White, and Bleu in Falls Church and it was pretty good. I believe they have the Cab as well. Always been a fan of the Hedges stuff, and until I saw this didn't pick up on the connection. Thanks.

I'm guilty of buying wine for the labels too -- it's impossible to resist buying something that looks good when you're in graphic design.

Guilty pleasure, I guess. But every now and then it works out nicely :)

Yeah... The label is nice... I am on a quest to find more of the 2006 Independent Producers Sauvignon Blanc. I scored three bottles in central Illinois and cannot find anymore. Can't wait to try the 2007 Merlot.

This is the first time I have heard of someone buying wine because they liked the labels. Guess its more common than I initially thought. time to mention this to the suits in the boardroom I think.

ha, your story sounds like my own, except I was at wholefoods. when I saw this merlot - I picked it & read the scoRevoluTion label & purchased it as a way to thumb it to "the man" and went back the next day to buy a case. it's just heavenly...