Grilled Bacon: At Least the Stillwater Ale was a Good Idea - DCFoodies.com

Grilled Bacon: At Least the Stillwater Ale was a Good Idea 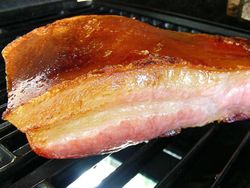 "Sometimes you eat the bear, and sometimes, well, he eats you."
- The Stranger

Here at the DC Foodies test kitchen (my backyard), I come up with all sorts of good ideas. The problem with good ideas, though, is they don't always produce good results.

My idea to grill bacon is a good idea. It combines fire, pork, fat and salt. What's not to like? Well, like The Stranger told The Dude, sometimes the bear eats you.

Grilled bacon, however, is not bacon. It's ham. It's country ham, actually. That shouldn't be too much of a surprise, as I approached the preparation and grilling the same way I approach large cuts of pork: I seared and then I slow cooked.

In other words, it makes some excellent country ham. Not exactly what I was expecting, but it sure wasn't bad. It just wasn't bacon.

When I came up with the idea of grilling bacon, the first thing I did was Google it. Sure enough, a whole bunch of folks have taken to the grill with packages of bacon. But the problem with grilling thin strips of bacon, as I see it, is all that delicious pork fat drips off, leaving you with shriveled pieces of smoked pork (which is great if you want to make jerky). When you pan fry bacon, the meat cooks in its own fat, giving it that fatty, delicious flavor we all know and crave. 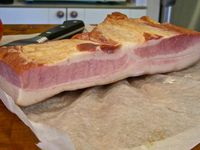 Instead of using strips of bacon, I opted for a one and a half pound slab that I picked up from my buddy Carlos at Canales Quality Meats. Slow grilling a slab of bacon bacon allows the rendering fat to baste the meat as it sweats in the heat, keeping everything nice and moist.

In the end, that's exactly what happened. After initially searing the fat cap, I flipped the slab and moved the whole thing to a cooler part of the grill and allowed it to cook for 35 minutes. The result was delicious, delicious ... ham.

So instead of BLTs, I came up with four HLTs. They ain't too bad, so go with it. 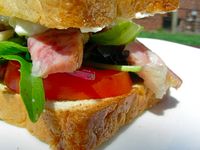 HLT one was a fairly straightforward BLT .. uh, HLT, except I roasted a couple heads of garlic in the oven and mixed them into the mayo. Now, I'm a pulp-in-my-orange juice guy, so I didn't mash up the cloves too much because I liked the idea of biting into the odd chunk of roasted garlic.

Basically, this is a smoked ham sandwich with roasted garlic mayo. It's a good sandwich, but probably not worth the trouble. Just go buy some ham. For HLT two, I had high hopes. It's the same sandwich as HLT one, but with the addition of soft French blue cheese. In my mind, the combination of salty, smokey moist pork would go incredibly well with the creamy, tang of the blue cheese. In reality, the sandwich garnered a "meh" from the missus. Hey, you win some, you loose some. 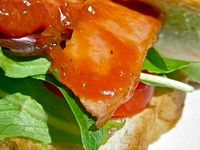 When HLT three was still BLT three in my head, I was planning on treating the bacon like pork by brushing it with barbecue sauce. In the end, I brushed the grilled ham with some peach barbecue sauce and it worked (note: use regular mayo). It's a little smokey and a little sweet, which worked well with the saltiness of the ham. Like the first sandwich, though, it didn't work well enough to go through the trouble. Stick with pork chops and the sauce and you'll do just fine.

And then there was the final sandwich, HLT four. This was the one that excited me. This was the one that would get my dear wife to roll her eyes. This is the one that I crowned with an beautiful egg, fried sunny side up. I do love me some eggs, and I've been accused by the missus of sticking them on top of everything. She's right, but that doesn't make it wrong. In fact, when it came to this little project, it made everything alright. 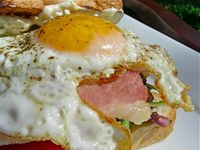 There is something near perfect about the combination of warm egg yolk and moist, hot ham. It's rich, savory, unctuous. And just as those flavors have you thinking you're eating an overly complicated, yet kinda sloppy breakfast sandwich (nothing wrong with that) the roasted garlic mayo keeps the sandwich squarely in the p.m. The sandwich reminded me exactly of the Three Little Piggy sandwich I had at Chicago's Silver Palm Restaurant (a sandwich Tony Bourdain described as "a work of genius, in an evil way."). Throw some of that blue cheese on it and you're there. The HLT with egg justified my day (nearly). And that's enough of a happy ending to go out on. 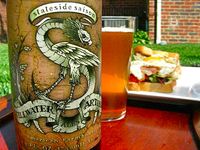 To go with my porky project, I picked up a bottle of Stateside Saison from the region's newest brewery, Stillwater Artisanal Ales. Stillwater is still very much a one-man band headed by Brian Strumke, a DJ turned contract beer maker (happens all the time). You can read all about Brian and Stillwater here or listen here. It's an interesting story, but what's important to me is that we have another local brewer producing quality beer.

The Stateside Saison, Brian's initial offering, is a well balanced golden farmhouse ale. I like this style of beer, but all too often it tends to be a bit cloying. The Stillwater ale, however, is just bitter enough, thanks to some dry hopping, to keep the beer from getting insipid. And at 6.8 ABV, you don't have to share the 22 ounce bottle if you don't want to.

Yeah, that's it. The ingredient list is pretty short this time. In defense of buying a pound and a half of bacon just to make ham, it put me back all of $5. So if this idea appeals to you, it's an inexpensive way to experiment with bacon on the grill.

An hour before you're ready to grill, pull the bacon out of the refrigerator and let it warm up. For grilling, you want to set up a hot and a cool zone. This will allow you to sear the fat cap and then slow cook the slab.

Remove the bacon from the grill and allow to rest for 10 minutes. Trim off all the excess fat cap you don't want and do with the ham what you will.

I think one would have better luck smoking individual slices. I'd like to take up either grilling or smoking bacon as an experiemnt, but I don't have access to a reliable grill for tweaking right now.

"The Stillwater ale, however, is just bitter enough, thanks to some dry hopping, to keep the beer from getting insipid."

Chris, I thought about the smoker, but I figured it would be too much because the bacon was already smoked. However, grilling thick slices might have worked better. Clearly, this is something I need to revisit.

Anon, generally you're right; dry hopping is meant to provide aroma, while bittering hops added early in the boil are meant to provide only bitter flavors. However, as hops have a naturally bitter flavor and do impart some of their oils to the beer during the dry hopping, I have to assume that effects the flavor of the beer. That said, I could be wrong and Brian Strumke is just adding a good amount of bittering hops early on, or the farmhouse yeast he uses has some bitter qualities. I've been wrong before and I'll be wrong again. What's important is he's making a good beer that's well worth trying.