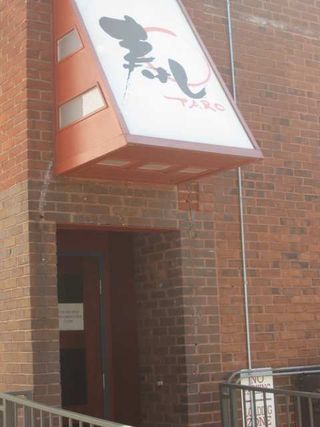 Last week I received a fabulous surprise birthday gift, when Eliza took me to Sushi Taro for omakase. For those that don't know, omakase pretty much means "your call," an instruction giving the chef carte blanche to serve up whatever he thinks is best. This is a commonly offered option in Japan, but not widely available in DC -- I'm told it took quite a bit of research to track the service down. So this is something I had wanted to do for ages, but other than eating way more fish than my stomach can technically hold, I had no idea what to expect.

Sushi Taro has taken quite a bit of flack on the internet since its complete restructuring back in late 2008; I'd never been, but it seems they converted from a typical Japanese sushi and noodle shop to something a bit more upscale. Lots of people on Yelp call the new Taro "soulless," and other equally unflattering things, swearing to never come back. That said, the place was bumpin' when we arrived around 7:00 last Saturday, and were led by the perfectly lovely front of house staff to a small room at the back of the restaurant. Inside was a small six-seater sushi bar, at the corner of which sat another couple sipping sake. We ordered a couple drinks, settled in, and waited for the chef to arrive.

What followed was a magical three hours, and one of the greatest food experiences of my life. I wasn't even planning on reviewing it (hence the few, mediocre pictures), but we had such a fantastic time I just had to share. 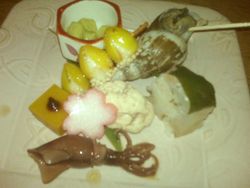 The meal is split into three distinct courses: Appetizers, sashimi, and finally sushi. The appetizers consisted of a mix of traditional japanese small plates. The chef's signature starch cake, a soft, almost gelatinous brick served in bonito broth and topped with Uni, was not my favorite thing in the world; its completely foreign texture made a pretty scary start to the meal, leaving us both wondering if we were up for what we had gotten ourselves into. From there, it was only uphill. Next came a fried cake made from tiny shrimp available only in the spring, and then a plate of seasonal fishes, including a whole firefly squid, and fantastic miniature conch that had been slowly braised for almost seven hours. With each plate came a description by the chef, explaining to us the dish's origin, and how it was prepared. A consistent theme throughout the apps, which would continue through the other courses, was an emphasis on using rare seasonal fish.

Next came the sashimi. The chef pulled out five square boxes from the refrigerator beneath the bar, which contained the day's fish offerings. He spent the next ten minutes showing us all the fish, and describing each in detail. We were welcomed to select whatever fish we wanted, but being a bit overwhelmed by the choices, we left ourselves in his hands.

The fish was of a quality I had never experienced. I love toro, and I thought I knew it well; the piece that the chef expertly sliced and plated before me was so sweet, rich and velvety, I am hesitant to even compare it to toro I have had in the past. This course was six or seven servings long, the highlights being the aforementioned toro, white salmon (which was in fact real salmon, but so high in fat that it is white), and the live scallop, shucked and prepared right before our eyes.

Right after we finished the scallop, the couple down the bar asked the chef if they served something in particular; the word was Japanese, and I didn't understand. The chef laughed, and said no, because it was not popular, but that he would gladly do it for them. He proceeded to open another scallop, and described the process, as he removed the innards (liver, intestines, etc), then separated the nervous system, and minced it into a sort of sauce, which he served on top. And hey, it turns out he'd made enough for four! Now, earlier I had already eaten a whole squid and some transparent baby eels served as noodles, so I couldn't really balk at this -- fortunately, it was delicious! The texture of the liver was almost like foie gras, and the sauce had a briny, low-tide flavor the likes of which I have never tasted. 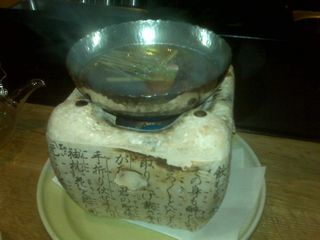 Our sashimi plates were removed, and replaced with a one foot square ceramic box. This is the traditional vessel for preparing Shabu-shabu - meat or vegetables lightly cooked in hot broth. Typically patrons are given a piece of raw wagyu beef, which is steeped in the broth for about a minute before eaten; we picked a lucky day, as the chef had some special seasonal toro which was perfect for the preparation. I kind of thought it a perversion to cook such a piece of fish, but the quick broth bath really enhanced the fish's flavor, and made the resulting meat even more buttery and delicious.

The final course -- because we clearly hadn't eaten nearly enough -- was a round of sushi. Again, we let the chef do the picking, though I did insist that we try my favorite go-to, the unagi. The fish was prepared as a simple nigiri, served with two different soy sauces, one standard, and one spiked with ginger. My beloved eel, while pleasant, paled when compared to the smoked salmon and the tuna cheek meat, which made a normal cut of tuna seem dry by comparison. I got the impression that the chef would have kept serving us until we couldn't move, but we stopped at about five or six rounds. The whole affair was capped with a small jelly of fresh fruit and a pot of green tea. 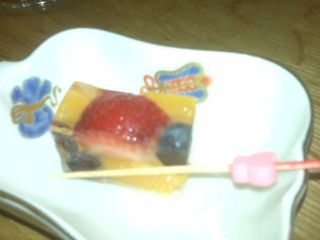 At the meal's conclusion, the chef actually apologized for the lack of attention, as the restaurant was packed, and he was doing a lot of the prep for the main dining room. In fact, the chef (who as it turns out was also the owner, Nobu Yamazaki) was extremely gracious, informative, and friendly, not to mention super talented with that knife. We had absolutely no complaints about the service, which makes me wonder how attentive they are on a quiet night!

Rates for the sushi bar seem to vary with the market; at the time, we were told that we would have to purchase a "minimum" of $120 worth of sushi each. I am not sure how they meter that, as there is no menu, but we accepted everything offered, and did not incur any upcharges. The sake list is a bit expensive, so we brought our own bottle from home, which the chef was more than happy to open and serve us, for a $25 corking fee. All told, with tax and tip, the bill came in at just under $400, which I believe is actually cheaper than it would have been had we ordered all that sushi ala carte.

Though the price keeps this from being a monthly sort of event, Chef Yamazaki's emphasis on seasonal ingredients makes me very curious to visit sometime in the summer or winter, and see what crosses my plate. The entire experience from beginning to end was beautiful; the food, the ambiance, and the adventure of it would be incredibly hard to match. I absolutely cannot wait to go again.

Awesome! I love getting omakase and I'll definitely have to try this out when I can afford it. Last time I had such a meal was October at Nobu in Vegas, and I feel overdue for something similar. I wonder if any Arlington/Alexandria restaurants have omakase available...