The Beer Trials: A Fun New Guide to the Wide World of Beer 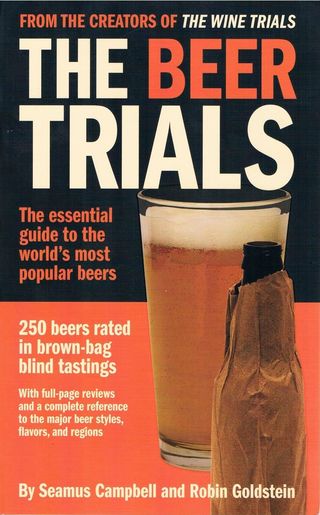 The beer world has become a vast, confusing place, since the boom hit back in the early 2000's. A lot of atlases have been published of late to guide one through this vast, undiscovered country -- indeed, one might call it an overwhelming number, as a search for "beer guides" at Amazon.com yields 855 results! For a beginner, selecting a guide has ironically become as difficult as wading through the beers they propose to describe! And each guide, of course, has its own aim and specialities, which are not always as clear as they might be. Well, neophytes, fret no more; The Beer Trials is a practially perfect populist preamble to the wide world of beer.

A rotating group of about two dozen beer lovers and experts blind tasted 250 beers of various types, agreed upon a score, condensed their notes into a pithy three or four sentences, and framed each entry with a little bit of background and label notes. That's about it. After a preface, some basic information on brewing, and a bit of a diatribe on marketing, the book consists mostly of these well laid out, cleverly written one page descriptions of each beer based on their results.

While this method is nothing new, authors Seamus Campbell and Robin Goldstein excelled in their execution. The extensive notes section is preceded by a brief but well thought out description of beer families and styles, in which groups the various beers were compared and ranked. This division by type is very important; it is often tempting to compare a light lager to Belgian ale, but what's the use? The Beer Trials does not compare Natural Light's apples to Chimay Blue's oranges, but rather ranks the beers in relation to their peers. 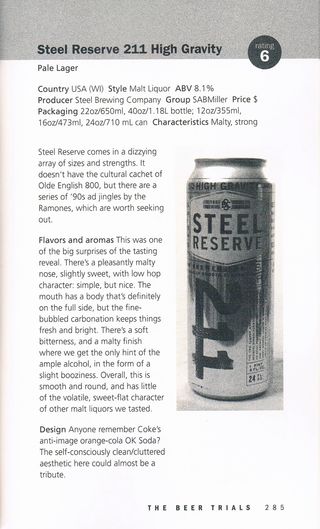 That's the other great thing about this book: along with Chimay Blue, they actually DO rate Natural Light! And Bud Light, for that matter, and MGD, and Busch, and every other cheap beer under the sun. And they do so earnestly, with thoughtful notes and reasoning to back up their high or low scores. Though many do garner the scores you'd expect, there are a good number of surprises, like the rosy description and score given to Steel Reserve, pictured at right.

Along with the macrobrews, the book is populated with widely available beers anyone can find; sizable microbrewers like Anchor, Sam Adams and Sierra Nevada, regional giants like New Belgium and Yuengling, and a good number of your dominant import brands from Asia and Europe are all well represented. Only a handful of these beers are rare or extraordinarily dear, and that is this book's greatest asset. Any newbie with even the most vague idea of what he likes could take this book to the grocery store, flip through and find information on any number of alternatives right in front of his face.

The authors state at the end of the preface that this book has an agenda: "To broaden your horizons, and narrow your search, by arming you with better information about beer. If we can help you find a new beer to love, then our purpose is met." For those new to the game, this book is sure to hit the mark, thanks to its populist selection and fun writing style. For these same reason, I don't think this would be a great pick for the journeyman or 'serious' beer drinker; you lot know most of these quite well, and would be better served by a Michael Jackson tome. This one would be the perfect gift for that slightly geeky young person in your life who is just about to start college -- it'll give him important knowledge to guide his beer pong selections, and force him to think about what he drinks, hopefully leading him down the healthier, more rewarding path towards better beer. Go on! Be the coolest aunt or uncle ever; here's the link.

Awesome. I wonder what they rated Natural Ice like? Ha ha! This seems like an excellent book to have around if you are asking me!

Lucky! You got it for free, in my opinion this book has got to be an awesome one!