Half-Smokes on the Grill and 21A IPA in the Can 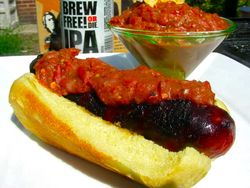 Around here, half-smoke sausages and Ben’s Chili Bowl are as synonymous as Nixon and Watergate. You just can’t think of one without the other.

There’s good reason for that. Ben’s makes a good half-smoke. But Ben’s is more than the dog. It’s historic. It’s famous. And it’s nearly as iconic as 1600 Penn.

But with all due respect, Ben's doesn’t produce the best half-smoke sausage in town. You do. Or at least you can.

A few weeks ago, the DC Foodies brain trust and their families got together at my place for an afternoon barbecue and beers. For the occasion, I ordered a 6-foot lamb sausage from my buddy Carlos at Canalas Quality Meats. (You might recall the 5-foot bratwurst I picked up a couple years ago). I noticed that there were a couple bins of half-smokes (hot and mild), so I picked up a couple mild ones for the kids.

The next day, I tossed all the sausages on the grill. The half-smokes finished first and were cut up into bite-size pieces. When the lamb was finished, I followed everyone into the kitchen to start setting everything out to eat. As I was preparing the plates, I noticed a stray piece of half-smoke and popped it in my mouth.

It was the best thing I ate all day.

Don’t get me wrong, the lamb sausage flavored with rosemary and oregano was great. But the half-smokes were incredible. Even chopped up, the sausage was moist with fat, a little spicy and perfectly smokey.

Like I said, Ben’s makes a good half-smoke, but the fresh ones I grilled were better. 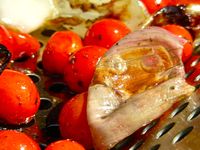 For this recipe, I also made a grilled tomato and shallot relish that you can use in place of ketchup. If you don’t use ketchup, no worries, these half-smokes certainly don’t need any help. And because I treated the half-smokes as sausages rather than hot dogs, I added a little mayo and stone-ground mustard as well. To each their own.

To go with the half-smokes, I picked up a six pack of 21 Amendment’s Brew Free or Die IPA. IPAs are my favorite style of beer, but their bitter, hoppy flavors make them tough to pair with food. So what do you do? Pair the beer with something spicy and very flavorful, like half-smoke sausages.

Thanks to the craft beer revolution, there are plenty of IPAs to choose from. Locally, we have Flying Dog’s Snake Dog IPA and Dogfish Head’s 60 Minute IPA. I chose an IPA brewed 3,000 miles away in San Francisco because 1) it’s a great beer, and 2) I was brain washed into it.

You see, I listen to two beer-themed pod casts (yup, I sure do): Beer School and The Brewing Network’s Sunday Session. The Sunday Session is co-hosted by Shaun O’Sullivan, co-founder of the 21st Amendment Brewpub and Brewery. He’s also friends with John Foster and Motor, the hosts of Beer School. John and Motor are also friends with Nico Freccia, the other co-founder of the 21st Amendment Brewery (or 21A for those in the know), and a frequent guest on The Sunday Session. As you can imagine, the 21A comes up A LOT on these shows. 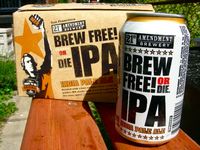 When their beers started showing up in the area a few months ago, I had a strange urge to try them. But just to show I’m not too brain washed, their most popular (beloved) beer, Hell or High Watermelon Wheat, isn’t really to my liking. But the 21A IPA is excellent, as is the Monk’s Blood Belgian Dark Ale. I also dig the card-board packaging and the fact that all their beers come in cans.

About that IPA, it comes in at a robust 7% ABV and pours a clear golden wheat color. It’s certainly a fully hopped beer, but not nearly as aggressive as other left coast IPAs like Green Flash’s West Coast IPA and Stone’s Ruination IPA. And thanks to the fact that it’s in a can, it’s less susceptible to skunking and you can take it places that otherwise prohibit bottles, like national parks and church.

Half Smokes and Grilled Tomato Relish
(Makes 4 to 8 servings)

For the half smokes, pull them out of the refrigerator 30 minutes before you plan to start grilling so they can warm up some. For the relish, you’ll want to break out the grilling stir-fry basket. Otherwise, skewer the tomatoes and be careful not to let the shallots slip between the grates. Lightly coat the tomatoes and halved shallots with olive oil and season with salt and pepper. 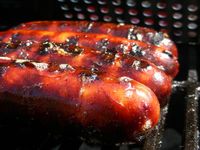 You’ll want to create a hot spot and a cool spot on the grill. When the grill is ready, place the shallots in the basket or directly on the grill, just slightly off the hot spot. Place the half smokes on the hot spot and close the lid. Grill for 5 minutes. Open the lid and check the sausages. If one side is nicely browned and charred turn them over. Also, flip the shallots over and add the tomatoes to the basket or grill. Close the lid and grill for another 5 minutes. (Check the tomatoes at about 3 minutes. If the skin is already charring and starting to split, move them to the cool spot.) Now, open the lid and move the sausages over to the cool spot (if you haven’t already). If the tomatoes have started to burst, they’re ready to come off.

If your cool spot is well away from the coals, you can leave the sausages on the grill to stay warm. (If you’re using a gas grill, just close the lid and turn off the heat.) The easiest way to do the relish is in a food processor. Basically, add the shallots first and pulse until they’re well chopped. And then add the tomatoes, garlic, vinegar, sugar, lemon juice, and salt and pepper to taste. Pulse the ingredients and taste. When you’re happy, it’s ready to go.

If you don’t have a food processor, just rough chop the shallots and tomatoes and combine all the ingredients in a bowl.

Now, pull the sausages off the grill and stick them in some buns. Finish with the relish and your condiments of choice. I hear Cosby likes his with mustard and onions.

Posted at 01:23 PM in Beer, Do It Yourself, Eastern Market, Grilling, Regional Food | Permalink | Comments (2)

Where did you find the 21A IPA?

IPAs are my favorite style too. Of all the IPAs I've had, Bell's Two Hearted is the hands down winner. DFH 60 min is right up there.

I picked up the six pack from Franklin's in Hyattsville. I've also seen 21A for sale at Total Wine in ALexandria, the Whole Foods in Dupont and at Taylor Gourmet downtown (5th and K).