Must Haves: Poutine at ChurchKey, aka the Disco Fries 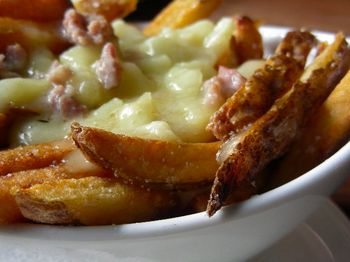 This probably isn't the best time to talk about something to do with Canada.

Listen, as a life-long Bucs fan, I know what it's like to get your hopes built up, only to watch them get slapped away, like so many Ovechkin shots on goal. It sucks.

But hear me out, because there's a bowl of gravy-covered Canadian happiness down at ChurchKey that will help you get past you're anger at the great white north and learn to love those maple suckers once again.

Or you can order it by it's American name.

The Poutine, aka Disco Fries (I have no idea why), may well be the greatest Canadian export since a washed up Wayne Gretzky joined the LA Kings. The dish is nothing more than French fries covered in sausage gravy and cheddar cheese. It's nothing less, either. Maybe Canadians need to bulk up for the winter. Maybe they hate life. Either way, covering fries in sausage gravy makes you wonder why we've been screwing around with ketchup this whole time.

(By the way, I assume ChurchKey also calls them Disco Fries as an homage to decidedly unhealthy coke -fueled late 70s. I don't know this, but it kind of makes sense.) 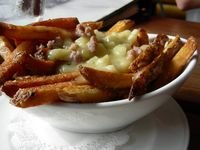 Now, I do have a conspiracy theory about poutine. Having grown up in the South, I've had more than my fair share of sausage gravy. Biscuits and gravy is easily my favorite Southern breakfast, and gravy can be found at every meal of the day. So, how is it that a region that puts gravy on everything from biscuits to fried chicken never thought to pour a little on fries? It just doesn't add up. And while I haven't spent much time north of the border, the Canadians are not a people known for eating prodigious amounts of gravy (they mostly limit themselves to puffins and whale blubber ... I think.). Yet, YET, they've nationalized this fantastically Southern style dish and then add cheese to it. Adding cheese is what we do! Us! The Americans! The fat ones! So I don't buy it that a Canadian came up with gravy-covered French fries. No. Either some poor bastard got lost between Chickasaw and Tuscaloosa, or the Underground Railroad had a border crossing. One or the other.

If you still haven't bought into what I'm talking about here, let me be perfectly clear: Chef Kyle Bailey takes a perfectly good bowl of crispy, hot French fries, plunks in some bits of cheddar cheese and covers the whole damn thing with creamy sausage gravy. It's horrible for you, but my god is it tasty.

And if you just can't bring yourself to order the Canadian national dish, remember that they can be Disco Fries until next year, or the year after, or whenever the Caps find a way to win in the playoffs.

Oooh I learned about that on Three Sheets: Whistler. http://www.hulu.com/watch/108841/three-sheets-whistler-canada#s-p1-so-i0

I like that there's a beer in Whistler called "Dude."

Real poutine would never use sausage gravy. It uses brown turkey or beef gravy. The other distinction is that "disco fries," as they are called in New Jersey, would use regular cheese, rather than cheese curds -- most commonly, mozzarella, but American or cheddar are also possible.

Actually, I goofed on the curds. ChurchKey uses cheddar cheese (I've amended the post). I guess I had cheese curds on the brain (kinda like a soft tumor). Brown gravy, beef gravy, sausage gravy, whatever. The damn Canadians beat us at something we clearly should have come up with generations ago. First it's was the Battle of Quebec and now this. When will the indignities end?

Drew, on behalf of the people of Wisconsin (aka my people), I deeply object to your description of cheese curds.

They're small, soft and lumpy. How's that not like a tumor? Besides, for all I know, tumors taste like cheese.

actually, they serve fries like these- covered in gravy and cheese, in new orleans, and since new orleans is way cooler than canada, i'm going to say this gravy/fries/cheese thing did start in the south and canada just copied it.

As much as I like your approach, husldc, French Canadians were one of the many early settlers of southern Louisiana and New Orleans. Maybe they brought their gravy and fry baskets with them.

Poutine (pronounced poo-tseen) is a very French Canadian dish. It uses a beef-based gravy and fresh cheese curds. The curds should never melt with the result being somewhat greasy gravy on fries with squeaking cheese bits. I know - my mom was Quebequois and we ate this a lot - cheap food to fill lots of kids' bellies.

Sounds like I might be on to something with this whole Canada, New Orleans gravy fries theory.

Poutine is:
- fries
- CHICKEN based gravy
- cheddar cheese curds made from unpasteurized milk

It's especially hard to find the cheese curds because it's not legal to transport unpasteurized dairies across state lines (or borders). Hence, variations with different cheese but in Quebec (where it's from) it's always just that.

Boston has much better poutine offerings than any other US city I've been to, but nothing is close to what we have at home.