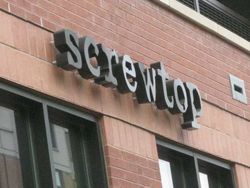 I've been waiting for awhile to write about Screwtop, this new addition to my neighborhood some six months back. I have visited Screwtop many times, and after each trip I'd start writing, and then stop. From week to week, something there seemed different, which in fairness should be no surprise in any new establishment. After several tumultuous months, though, the place seems to be finding its footing. 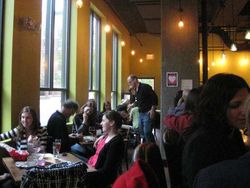 Screwtop is the ambitious creation of Wendy Buckley, a former internet exec who ditched the Net for a run in wine sales and cheesemongering, all in preparation for opening up this bar. Of course, Screwtop is more than a bar; it is a multi-concept space incorporating a retail wine and cheese shop, wine bar, and 40-top restaurant, all crammed into about two thousand square feet. 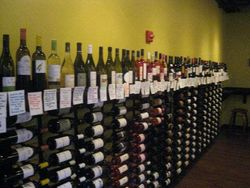 The space itself is pleasant -- with several large floor to ceiling windows letting in plenty of light, and shiny new dark wood bar -- but rather schizophrenic. While the retail area is airy and wide-aisled, the bar/main dining space is absolutely packed with chairs and tables. Thank goodness standing at the bar is discouraged, as when the place is bumpin' (which is often), the effect is nearly as claustrophobic as the nearby college hangouts. 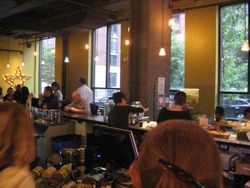 Screwtop's proximity to said meatpits has made it a bit of a boon to the local tipplers. Indeed, a major part of Screwtop's raison d'etre seems to be to build a bit of a community for Clarendon area drinkers of the older, more reserved persuasion (and those with aspiration to such). One of the more interesting features is their wine club, which offers two bottles with a matched cheese for $40 / month. Members receive discounts on food and drink and are encouraged to attend the month pick-up parties, to meet and mingle. As often as not, a book club or similar group has called dibs on one of the two big tables set off in the retail area, where I assume they meet on a regular basis. Screwtop also has a very active Facebook and Twitter 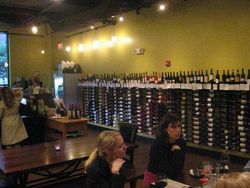 presence; followers and fans are the only ones to know about their Tuesday Happy Hour and "Wino Wednesday" specials, which can be very generous.

So Screwtop gets top scores on engaging their clientel; the food is a bit more mixed of a bag. The central focus of the menu is the cheese and charcuterie, which may be had for $6.50 a pop, $17 a 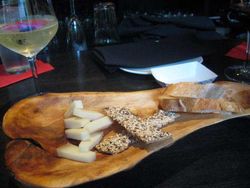 threesome, or $33 a sixer. The 20 or so selections are varied and change frequently; one week I had one of the richest duck liver pates I have ever had; two weeks later grocery store favorite President Brie was a feature. On first visit the portions seemed ginormous, but they have adjusted down to a par-for-the-price size. Though the accompanying fruit and nut crackers are quite tasty, I am disappointed that Screwtop asks a sizable upcharge for any sort of condiments, including cornichons and mustard, which are often served gratis. The staff isn't stingy with the free truffle-salted popcorn, though, so I guess ya gotta take the good with the bad there. 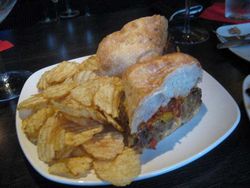 Screwtop also offers more filling fair in the form of sandwiches and salads. I haven't sampled a lot on this end, but on last visit I finally ordered the much touted Buffaloaf sandwich. Based on Wendy's mother-in-law's secret recipe, this big-ass combo of ground buffalo, cheddar cheese, bacon crumbles, sun-dried tomatoes, and chipotle aioli was as decadently awesome as it sounds, but fluffy despite the fat. At $13 this was easily enough to feed two, and the chips and $3 side salad that accompanied, though clearly store-bought, were more than fine. 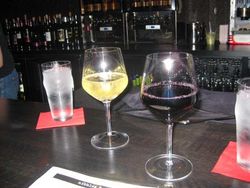 And finally, on to the drinks. Though hard liquor is verboten,  Screwtop offers an impressive 35+ wines by the glass, along with two draughts, and numerous beers by the can and bottle. Prices range widely from about $7 to $15 or so a glass, beers about $5 to $10. In a word, the wine list may be described as eclectic. Selections hail from well-worn areas like California and Argentina, to the more obscure like New York, Moldova, and even Michigan. Though undeniably interesting, the wine list is also, unfortunately, rather difficult to read. Wines are split into categories 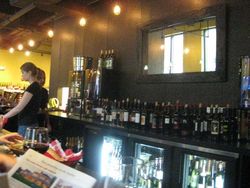 based on clever but unhelpful puns, with nothing listed but appellation and price. The helpful and always friendly staff is more than willing to let one sample anything they like, but this feels like a bother when the bar is crowded. It would be nice to see a bit more info there, and maybe more pours in the lower price range, as those $7 glasses are rare. That said, the ever changing three-glass flights are a bit more well-structured, and they often proffer a taste of some real rare and pricey wines for a song. If you like what you've tried, you can get a bottle for home at 5% off, which is a nice touch.

I fear I may have come off a bit more negative here than I had intended. I don't really mean to crap on Screwtop. It's got some really great innovations going on, and always enjoy myself there. The concept, ideal, and much of the execution are great. Hell, they couldn't have happened upon a worse time to open, what with Snowpocalypse I and II occurring in their crucial first months (Eliza and I took refuge there in the December storm, during which they valiantly stayed open, and we had a blast). I criticize because I love, and I genuinely hope Wendy and her crew to do well. With a little bit of wine and cheese work, and maybe a bit of furniture moving, I could see Screwtop becoming a long term Clarendon fixture.

Anyone heard of this Supper Club thing?

Point Break has announced their special offers during all of the games of World Cup Soccer to all the soccer fans of NY.

* Open for all the games
* Serve breakfast for the early games.

Lets cheer your team to create a new history!!!!