Grilled Blue Cheese and Bacon Quesadillas, What a Great Idea 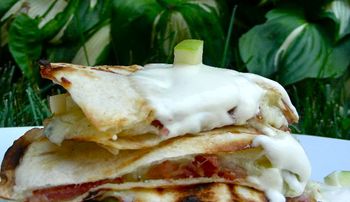 Can you steal an idea if part of it was yours?

If you can, then I've stolen the idea for this post from my friends Sarah and Andy (who you might remember from such posts as Smoking and Freezing). A few weeks ago, Sarah and I were talking about the grilled pizzas she was planning to make for some out-of-town friends. One of her favorite pies is a bacon and apple pizza covered with sharp cheddar cheese.

I told her it sounded fantastic ... and then suggested how to change it. (I do this a lot, which either makes me egotistical, condescending or kind of a dick. Probably all three.) Bacon and apple go great together, but why not pair them with blue cheese instead of cheddar? The tang of a good, creamy blue cheese is the ideal accompaniment to smoky bacon and tart, sweet apples. Cheddar, on the other hand, pairs great with, um, beef.

Giving my advice the consideration it deserves, Sarah went home and whipped up a bacon, apple and cheddar cheese pizza. Her guests loved it.

Still, I'm right. Like basil, tomato and mozzarella, blue cheese, apples and bacon are natural allies. I'm not breaking new ground, mind you. These ingredients have been brought together for years, especially in salads, but also in desserts, sandwiches and main courses.

Although the combination is classic, bringing them together in a quesadilla isn't. 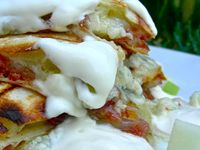 I've been putting off doing a quesadilla post for a while. As much as I enjoy a warm, crusty quesadilla (it's like a hot taco!), it seemed too easy to bother with. Basically, it's two flour tortillas stuffed with something (including cheese) and heated until the contents melt together and the tortillas become golden brown and firm. Serve it with some guacamole and sour cream and you're good to go.

And then I noticed that Steven Raichlen included quesadilla recipes in a couple of his books. So game on.

Their simplicity is their beauty. You can go traditional and use queso blanco, beans and peppers, or you can play around with the ingredients and use, I don't know, blue cheese, bacon and apple. Instead of sour cream, you could use crème fraiche, which is similar, but has a milder, creamier flavor.

While I'm just talking about cheese, meat and fruit, the blue cheese, bacon and apple have a way of dressing up the quesadilla, or at least breathing some new life into the dish. And crème fraiche just sounds fancy.

More importantly, the ingredients are perfect for a quesadilla. The flour tortillas are unobtrusive and the strong flavors of the ingredients remain distinct even as the blue cheese, warmed by the heat of the grill, envelops the crunchy bacon and crisp pieces of apple. 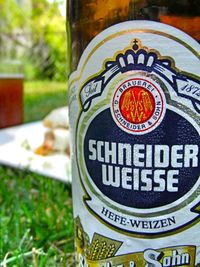 To accompany the quesadilla, I picked up Schneider Weisse hefeweizen (Yup, a German wheat beer to go with my Latin quesadilla filled with blue cheese and apples.). Admittedly, the hefeweizen has more to do with the season than the meal, but it works well with the quesadilla. Just as cold winter evenings have me craving dark stouts and wee heavy Scotch ales, the sticky hot days of summer trigger a longing for the smooth, sweet flavors of a good German hefeweizen.

And when it comes to pairing a beer with a dish that has such strong flavors, the hefeweizen is a good match. The mild banana flavors compliment the quesadilla's sweet apple and tart cheese, and the unfiltered beer has enough body to stand up the rich blue cheese and salty bacon.

Besides, it's hot and I want a hefeweizen.

So I don't know if I stole the idea for the quesadilla from Sarah and Andy or a cheese plate I had at some point. Wherever the idea came from, it works. Is it better than a bacon, apple and cheddar cheese pizza? Who can say? (I can, and it is.) 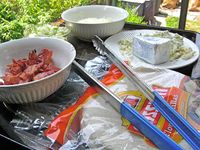 8 flour tortillas (two per quesadilla)
4 oz. of blue cheese, crumbled (I like Maytag)
1 package of thick cut bacon, or three strips of bacon per quesadilla, fried and diced into small pieces
1 Granny Smith or similar tart apple, diced into cubes or small pieces (squirt a little lemon juice on the apple pieces to prevent them from browning)
1 small container of crème fraiche
1/2 lb. of queso blanco, shredded

Quesadillas cook very quickly, so you need to have all your ingredients prepared beforehand. And if you're using a gas grill with flavorizor bars, take them off. The tortillas need direct exposure to the flame in order to brown and char properly. If you're using a charcoal grill, you're fine.

You'll notice I have queso blanco in the ingredient list. It's literally the glue that will hold the quesadilla together. The blue cheese will get nice and gooey, but not enough to bind the tortillas. And because the queso blanco has such a mild flavor, it won't get in the way of the much bolder flavors of the other ingredients. 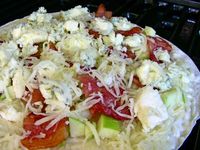 Halve or quarter the quesadilla (or not, whatever), add a dollop of crème fraiche and enjoy.