Must Haves: Cafe Atlantico's Medio Dia Ain't a Cuban, but It's an Afternoon Delight 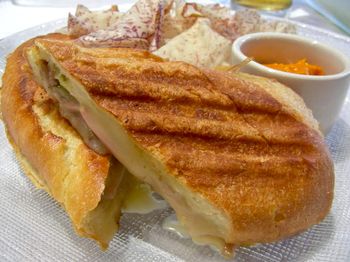 There may be no more perfect culinary creation than the sandwich. At its best, it's simple: meat, condiment, maybe some cheese and greens. Less is more because more is more. More clutters. More gets in the way. More misses the point. Less does, too. Less is meat and bread, or worse, condiment and bread -- the wish sandwich.

At its best, a sandwich is a harmony of few notes. It sings.

The Cuban sandwich, el Cubano, is a perfect sandwich. Ham, roast pork, Swiss, mustard, and pickles all pressed between crusty pieces (sometimes buttered, sometimes not) of Cuban bread. It doesn't get much simpler.

I grew up on the Cuban, so ubiquitous in Tampa it gets taken for granted. It's not hard to find a good Cubano in Tampa. Sure you could hit the lunch counter at La Teresita, just off Himes, or El Gallo de Oro, where Cuban men still play dominos out front and a short walk will take you to the small shop where my wife bought her wedding dress.

Hell, you could get a mean pressed Cuban at the gas station down the street from 98 Rock where I interned in college. Nearly every day after my shift at the morning show ended at 10:30, I'd drive down to fill up the car or just me. My sandwich was often the first of the day. I don't know if it was the sleep deprivation, the gas fumes or the virgin grill top, but I never got a bad Cuban from that place.

So if I can get a great Cubano at a gas station, why can't I get one in D.C.? Sure, I've had some decent ones at places like Cuba De Ayer in Burtonsville, but the bread never seems quite right or they skip the ham or pork. Whatever the case is, it's never a proper Cubano.

The thing is, though, the sandwiches are usually pretty good. They're just not good Cubanos. If they'd just call them something else I'd be able to enjoy the sandwich. It may be just a name, but the name carries expectations, which too often go unmet.

Now, call that sandwich a Medio Dia and you're on to something. 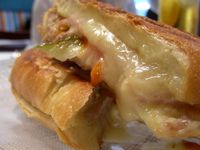 Just look at that thing: confit pork, ham, and warm, melted cheese between two pieces of crispy, crusty bread. It's beautiful. Monikers aside, Cafe Atlantico's midday version of the Cubano is a damn good sandwich. They even remembered the pickles and mustard, and knew enough not to call it a Cuban.

You see, people, this is why Jose Andres is such a well regarded chef. For all the complexity of Minibar and variety of Jaleo and Zaytinya, Andres recognizes the perfect simplicity of the Cuban sandwich and doesn't screw with it too much.

Sure, the bread's not right, but few people north of the 813 seem capable of making a decent loaf of Cuban bread (it's very similar to French bread, but the interior is much more soft). On the other hand, using confit pork instead of roast pork is genius. I might go so far to say that it's better than the roast pork. No, I will say that it's better than the roast pork. It's pork slow cooked in fat. How can rich, unctuous pork not be great? It can't. It just can't.

And always a nice touch is the strangely thick, bright orange hot sauce you can request at Café Atlantico. It's not traditional, but I put hot sauce on nearly everything, including Cubans. Trust me, it works.

As much as I like this sandwich, it's not a Cuban. Maybe that's a good thing (and not just because I like to complain about such things). So long as I can't get a proper Cubano here, it will always be a special treat when I'm back in Tampa. But when I can't head south, at least I can head to Café Atlantico for lunch.

Cafe Atlantico is unfortunatly one of the most overpriced and overhyped restaurants out there. I went there last night with friends and spent a fortune for very little food and was immensely disappointed. I will say it was diplayed very creatively though what little of it was on our plates. My husband ordered a $28.00 plate of lamb which consisted of three tiny kebab cubed sized peices on a bed of peas. Really Jose?? Normally, I love Jose Andres and his other restaurants like Zaytinya and Jaleo but Atlantico is one place where a fool and his money are soon parted!!!!!

WOW - I lived in Miami for several years when I was married to my first husband, who was Cuban, and was kind enough to show me around to the little known best spots in South Florida for my favorite sandwich of all time. Hard to find one now that I'm in Seattle, but these pics sure did bring back memories!