Home Archives About Facebook Twitter Instagram
Planet Barbecue: Raichlen offers up one more great guide for the grill
SAVOR 2010: The Good, the Bad, and the... Foodly? 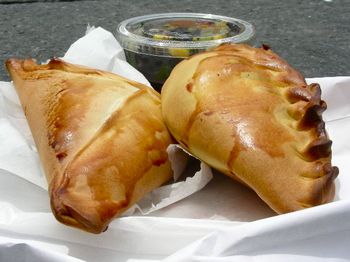 A few weeks ago, Food Wars rolled into town to settle our city's big food conflict: who serves the best jumbo slice of shitty pizza in Adams Morgan.

Who won? Who cares?

The good folks over at the City Paper did a fine job panning this steaming pile of crap. However, the show did resurrect the issue of D.C.'s lack of a signature dish. A poll conducted by the City Paper back in December found (unsurprisingly) that most folks think the half-smoke at Ben's Chili Bowl is the District's Philly cheesesteak.

It's not, not for me anyway. When I think of D.C., I think of Julia's Empanadas.

In 2004, the missus and I moved down to Chapel Hill, N.C., so she could attend grad school and the University of North Carolina. For the three years we were in Carolina, I never thought about half-smokes, Peruvian chicken, or thin pizzas with fancy toppings. I thought about savory pastries filled with meat and egg. I thought about their weight and their egg wash. Trips back to D.C. often meant trips back to Julia's. Now, the empanadas being a Spanish-cum-South American dish, you'd think the Chilean style beef or the chicken filled Saltenas, with their boiled eggs, olives and onions would be the way to go. Or maybe the spicy chorizo empanada with black beans. Oh no, my friends, they may be delicious pockets of meaty joy, but the best one on the menu is the turkey empanada with spring onion.

The sweet savory ingredients of turkey, onions, jalapeno and cilantro mingle together in a rich filling tinted dark yellow by turmeric. It's Latin Thanksgiving inside a warm golden shell. Without a doubt, it is the best $3.41 this city has to offer (which is why I always end up spending $6.82).

So as the immigration debate rages on, consider that the signature dish of our nation's capital might be a South American pastry born in Spain. I like apple pie, but I love Julia's empanadas.

I think they are okay, Tutto Bene or My Bakery are wayyyyyy better. I found a small bone & cartilage in my last empanada by Julia. I wish there was more empanada competition in the District!!! Then Julia would step up her game, which is pretty bland right now.

You may be right, Sella, but as you note, Julia's has the DC market (and my little heart) cornered. That said, I obviously don't find Julia's empanadas bland at all. Instead of a pizza showdown, maybe what DC needs is an empanada competition.

I've had many of those empanadas with Drew (the 2 am variety, never the 11 am kind) and I always like them when I eat them. Then I wake up the next morning wondering why I did that to myself. I'm giving the nod to the half-smoke as DC's food.

what about ethiopian food?

What about it, mike?