Home Archives About Facebook Twitter Instagram
SAVOR 2010: The Good, the Bad, and the... Foodly?
Must Haves: Cafe Atlantico's Medio Dia Ain't a Cuban, but It's an Afternoon Delight 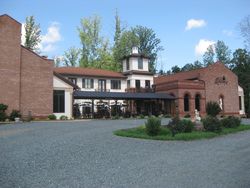 As I am sure you are all aware, I-95 is a horrid, horrid bitch of a road. Traveling back up from visiting my brother in Richmond last Sunday (welcome to Virginia, James and Christine!), we'd hit a couple nasty backups, but it was pretty much smooth sailing until Exit 148, when we saw a nasty bit of business looming. On a whim, I took a hard right off the highway in pursuit of Potomac Point Winery, whose sign I'd seen a couple clicks back, rightfully thinking that a couple glasses of wine beat the hell out of sitting in traffic for a half hour. 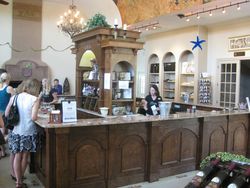 Beyond the one on the highway, signage is a bit sparse on the six-mile journey to the three year-old winery, and we promptly lost ourselves on a dirt road in the middle of nowhere; if you plan to visit, make sure you actually, like, know the address. After a bit of GPSing, we arrived at the tasting room, a large, pretty, white stone and brick structure set high on a hill, amongst some small vineyards and well manicured shrubberies. The inside is open and comfortable, with very high ceilings, the usual array of knick-knacks adorning the walls and alcoves, and a large, island-style, marble-topped tasting bar in the center. Amenities include an olive oil tasting bar, courtesy of Stella Cadente, a dim, dark wood accented lounge, a patio bistro, and even a children's playroom (a brilliant idea, left un-photographed cuz I'm too pretty for jail). Overall, very pleasant in that slightly cheesy, faux-continental sort of way that tasting rooms have. 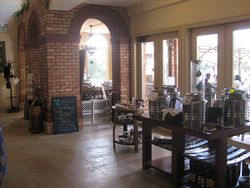 s three tasting options, ranging from $5 to $10 per person, each including a souvenir glass and free access to the bread and infused oil's at the olive oil bar; not too shabby! At the host's suggestion, we opted for the whole shebang, and made our way to the bar.

After the fact, I read a few reviews online that gave PP less than stellar points in the service department, which I can totally corroborate. For all the six or seven employees wandering around the place, there was only one attending to the 10 or so customers at the bar. Several staffers were screwing around just next to us, and the two women at the cashier's stand were com

pletely unoccupied, while the poor girl serving us and all the other tasters did double-duty, also being the service bartender for the bistro. She eventually got a little relief, but in any case it took us nearly an hour to taste through, and we got little attention or info. Bad show, there.

The wines were... dry. "Dryness" in a wine is a reflection of it's residual sugar; that is, the amount of sugar that is not converte 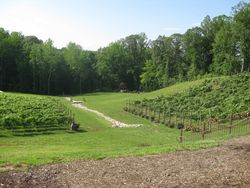 d into alcohol by the yeast during fermentation. The actual experience of dryness is relative; a heavy Chardonnay could have a good amount of sugar in it, but have enough in the alcohol, acid, and flavor department to still taste "dry." Potomac Point lists the residual sugar content of each of it's wines on the tasting sheet -- most are categorized simply as "Dry." This is a bit of an understatement: the "Dry" wines seemed to have no  residual sugar whatsoever, which worked to their detriment. 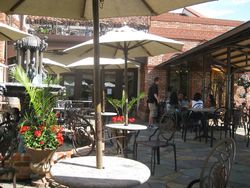 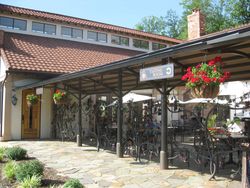 e reds, the "Chianti-style" 2009 Abbinato ($16.99) was pleasant and far more balanced than most of the offerings, and the 2007 Heritage ($26.99) Bordeaux blend had pretty good fruit and acid, but the 2008 Merlot, Cab Franc, and Norton each left a lot to be desired. The winery offered a couple sweet wines that hit the spot, but most of the others were very disappointing. All of the really poor performers were from the 2008 vintage, so I'll give PP the benefit of the doubt and assume that was a rough year for growers, and they purchased some real under-ripe grapes -- I certainly can't imagine them surviving these past three years if that level of quality as the standard. 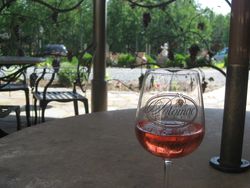 Afterward, we retired to the patio for the obligatory glass of pink wine. The bistro was serving, and the food looked pretty good, but we'd filled up on bread and olive oil, and took a pass. Looking out over the grounds through the patio's wrought iron fencing was lovely, and the rose made a nice compliment to the late afternoon sun. Being a unique, convenient rest stop off of Satan's own highway, I could definitely see myself visiting Potomac Point again -- but with Pearmund, La Grange and Paradise Springs closer in to the west, I am pretty sure I wouldn't make it a destination.

I went there once. Very nice winery but it's in the middle of nowhere. Certainly a good stopping point if you're traveling along 95 :)

We want to love this winery but we always have an awful experience on the customer service side.

They do an excellent job of taking your money upfront and collecting payment but everything in between is a crapshoot. Always check your bill they tend to err on the side of charging for more or tacking on cover fees when bands are playing without telling you.

We were there for a tasting and they had two weddings going on, the space isn't big enough for two weddings. It was enjoyable watching as guests didn't know which wedding was which and the staff yelling at guests for using the wrong doors or going into the wrong rooms.

The poor cake lady for one wedding had to cart a cake around the entire place, through the tasting room and through the heat on a little cart because they wouldn't let her use a door that led right into the room. It looked like it was going to fall over!

It seems uppity for a newer up and coming winery and until they improve their customer service, we won't be going back.